The Business of War

A less-heralded aspect of wartime is the logistical support and recordkeeping required to wage war. A nation had to clothe and feed its troops and supply them with arms and ammunition. Horses and pack animals needed to eat, too. Equipment and ships needed repair, and private transportation was often needed to move men and material. Spies required payment as did a plethora of other people who served and supplied the armed forces.

In the War of 1812 both sides of the conflict experienced great logistical difficulty. Harsh weather and the lack of transportation routes made the movement of troops and supplies difficult. In the Old Northwest, for example, roads had to be cut to move troops. And fighting often occurred in less settled frontier areas, which provided little in the way of food and forage. The more populous and urban United States had better access to food, supplies, and arms during the war. In British North America, militias had taken so many agricultural workers that Canada had to rely increasingly on imports, and so many of their wartime supplies needed to come from across the Atlantic. Many Americans still traded illicitly with Canada during the war, however, especially since those engaged in mercantile pursuits were often against the war in the first place. Ship-building capacity and a budding industrial sector were other advantages that United States had over British North America.

“…according to the form marked R.”

Instructions from the Paymaster-General of the armies of the United States to deputy and other sub-paymasters : respecting the manner in which they are to perform their duties, and keep and render their accounts, which, with trifling variations, may be made applicable to paymasters of the militia of the several states. Washington City: Printed by Rapine and Elliot, 1813.

The first page of this book of instructions and sample forms includes a saluation with blank spaces to fill in the date and the rank of the individual receiving the book. This copy is dated “Nov. 1813” and the recipient has been appointed “a Deputy Paymaster General.” At the close of the instructions, it is signed “Robert Brent / P.M. U.S. Army.” Either the books owner or its issuer has underlined the word ‘duplicate’ wherever it appears in the following passage: “Advances by you to regimental or other subordinate paymasters are to be made on duplicate estimates of the PAY, SUBSISTENCE, FORAGE, and BOUNTIES and PREMIUMS, of their respective regiments, duly certified by them, according to the form marked R. On their presenting you with these estimates you are to place the money in their hands, take duplicate receipts therefor, according to the form V…” 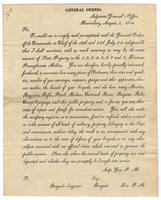 General order for a count of state property

This general order to nine divisions of the Pennsylvania militia requests detailed inventories of equipment: “You are therefore, hereby specially instructed, forthwith, to ascertain how many pieces of Ordnance,, their sizes and qualities, number of gun carriages, rammers, sponges and other apparatus, there are within the bounds of your brigade, and also how many Muskets, Bayonets, Rifles, Pistols, Holsters, Cartouch Boxes, Bayonet Belts, Camp Equipage, and other public property, and, so far as you can, their state of repair and fitness for immediate service.” 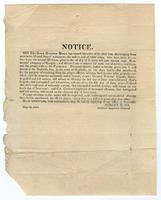 A schedule for mustering out

This notice from Assistant Inspector General Robert Hays issued instructions for the discharge of certain groups of volunteers and militia. He stated that he would “attend at the Nashville Inn, in the town of Nashville, on the days herin-after mentioned, for the purpose of receiving from the proper officers of corps their muster rolls… General Roberts’ brigade, that retrograded and left service, will attend on Monday the 6th day of June next…” After his scheduled meetings, Roberts would pass the rolls to the Paymaster. 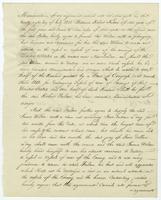 A contract for the use of torpedos

Inventor Robert Fulton first worked to develop torpedos for the use of the British navy in the Napoleonic Wars. His results were disappointing, and his work was rejected as not practical by the British and later the Americans, too. This contract is between Fulton and Welden, presumably the captain of a privateer. Fulton agreed to supply the “Torpedoes and Apparatus,” and Weldon agreed to split any prize money earned from the destruction of enemy vessels. 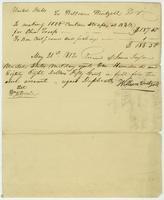 William Wentzel. Receipted bill for a thousand canteen straps for Ohio troops. May 21, 1812.

The War of 1812 collections include a large number of bills and receipts for a wide array of goods. Individually they seem insignificant, but as a body of materials they display the range of transactions, small and large, involved in the war. Pictured here is a receipted bill for canteen straps, but the collection includes documents related to everything from spying to barrels of flour.