War or No War? 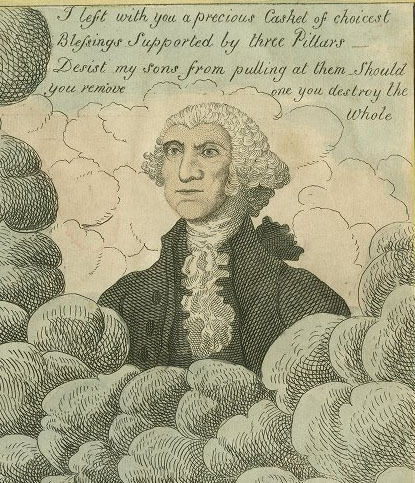 Present State of our Country

If support for war was mixed in the Republican party, the Federalist party was overwhelmingly against declaring war on Britain. With its power centered in the commercial elite of New England, the economic disaster brought on by Republican embargo and non-importation laws made Federalists irate. They considered war an expensive mistake and favored a more conciliatory relationship with Britain. Though traditionally Federalists were supportive of a strong central state and national military, their political opposition to the war caused them to take up arguments in favor of states rights, particularly regarding the activation of state militias and the imposition of taxes to finance the war.

Debate over the impending war also had a serious religious dimension. Many people were concerned over the moral implications of war, and both pro-war or anti-war arguments took up religious themes. Those opposing the war sometimes cited concerns about the fallacy of a just war or opposed fighting Britain who they viewed as a defender of the faith against the depredations of the Catholic French. Pro-war arguments depicted the conflict as a just war led by Americans, a chosen people, against Britian, a country with a long history of religious intolerance and persecution.

In this anonymous pamphlet, the author took on as pseudonym the name of the Spartan leader credited with establishing its distinctive organization on military principles. The pamphlet is an example of the literature common in the period before and during the war, presenting arguments for and against the conflict. Lycurgus was critical of the U. S. administration, but advised the building up of defenses and the immediate cessation of the “influx of foreigners” to avoid “being identified with the disgorged criminals of Europe” (page 64).

Much debate on the War of 1812 was infused with moral and religious values.Elijah Parish was a prominent anti-war clergyman whose statements often led him to be accused of sedition. Some say his fast day sermons were more restrained than his other works: "Such is the spirit of our State and General governments. Do they not exhibit the hypocrisy, the oppression, and cruelty of Babylon? Had they sold themselves to her Prince, had they sworn to destroy their country, would they dare perform more than they have?" (page 28).

John Lowell. Mr. Madison's war : a dispassionate inquiry into the reasons alleged by Mr. Madison for declaring an offensive and ruinous war against Great Britain ; together with some suggestions as to a peaceable and constitutional mode of averting that dreadful calamity. Boston: Printed by Russell & Cutler, 1812.

Lowell, a Massachusetts lawyer and writer, was probably the most prolific pamphleteer of the War of 1812 period. He often wrote under folksy pseudonyms, as in this volume credited to “A New-England Farmer.” He was a rabid critic of Republican administrations: “…I will defend, uphold and maintain the rights and interests of this State against all hostile attempts whatsoever. To me, it is a matter of indifference, whether the attack upon these rights proceeds directly and openly from the great usurper and common enemy of all civilized States, or whether the same be made through the partiality or the mistakes of the men whom a majority of our citizens have unfortunately elevated to ill-deserved power” (page 3, image 15). Read other works by John Lowell. 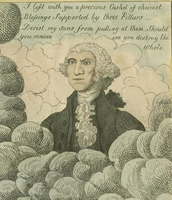 George Washington, observing the scene from heaven, delivers a warning in this political cartoon on the war debate: "I left you with a precious Casket of choicest Blessings Supported by three Pillars-- Desist my sons from pulling at them. Should  you remove one you destroy the whole." The pillars are labeled "Federalism," "Republicanism," and "Democracy."

← War Hawks
Readiness →
Before the War
War or No War?