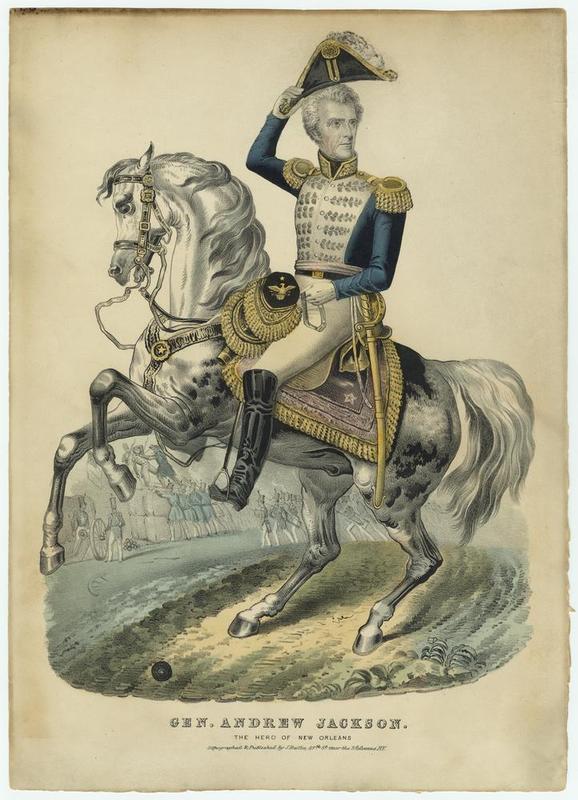 U.S. outrage at the so-called massacre at Fort Mims by the militant Creek group known as the Red Sticks, led to the call out of several militias from southern states who joined some army regulars in a retaliatory attack on the Red Stick settlement at Horseshoe Bend. Andrew Jackson, at this time a general in the Tennessee militia, led the attack on the fortified village which killed more than 800 of the Red Sticks. The defeat was devastating to the Creeks, and marked the beginning of the rise of Andrew Jackson who was soon promoted to Major General in the U. S. Army.

A review of the battle of the Horse Shoe, and of the facts relating to the killing of sixteen Indians. 1828.

Published during Andrew Jackson’s campaign for president, this pamphlet argues aggressively against his fitness for office based on the incident cited in the title, as well as on his execution of mutinous soldiers. The unknown author encourages the reader to judge for himself and come down in favor of mercy, concluding: “And you will save this republic, the world’s best, last hope, from the dangers necessarily incidental to it, from the command of an illiterate, unexperienced, and cruel General, who draws all his vanity from the destruction of HUMAN LIFE.”

Jackson on the Capture of Pensacola

In this letter, Jackson wrote to a fellow general, he described the capture of Pensacola: “The necessity of any further secret agency at Pensacola is now obviated. On Monday the 7th inst. I entered that place, [on a charger?] at the head of 3,000 men exposed to the Forts and Blockhouses of the Spaniards and British fleet of seven sail.” Pensacola was part of Spanish Florida and was home to a garrison of British forces. Jackson ousted the British, but left the site in Spanish hands, satisfied with having eliminated Pensacola as a stopping point for British forces moving from Jamaica toward New Orleans.