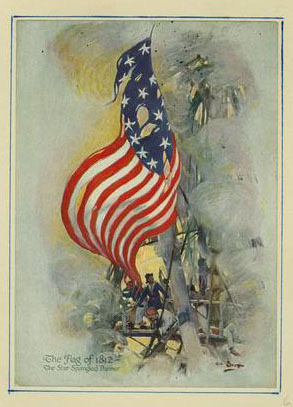 Surely the most famous product of the War of 1812 is the song now known as “The Star-Spangled Banner,” the United States national anthem since 1931. Attorney Francis Scott Key was involved in negotiating the release of an American doctor held prisoner by the Royal Navy when the British sought to soften up the defenses of Baltimore. Key was not on a British ship, but on the frigate U.S. President when he observed the dramatic day-long bombardment of Fort McHenry.

Key penned the lyrics of the song, but adopted an existing tune, that of the popular British song Anacreon in Heaven. Originally titled “The Defense of Fort McHenry,” the song was not even the first one that Key wrote using that tune. His song celebrating the accomplishments of Captain Stephen Decatur in the Tripolitan War used the same tune and even included the phrase “star-spangled flag.”

A collection of war songs

National songster, or, A collection of the most admired patriotic songs, on the brilliant victories, achieved by the naval and military heroes of the United States of America, over equal and superior forces of the British. Hagers-town, Maryland: Printed by John Gruber and Daniel May, 1814.

This volume includes the first printing of Key’s song in book form, under the title of “Defence of Fort McHenry” on page 30-31 (image 34-35). The majority the songs in this volume are on the subject of American naval victories, perhaps reflecting the interests of the state in which it was published. 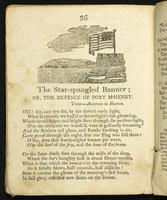 Another compilation of patriotic songs

The first printing of the song in a book under the title, “The Star-Spangled Banner.” A long note follows the lyrics, telling the circumstances of its composition. The song is attributed only to “a gentleman.”

An early broadside which presents what is probably the first appearance of the song with Francis Scott Key named as author. Like most of these 1814 publications, the printed lyrics consist of four verses; only the first verse is sung today as the national anthem. 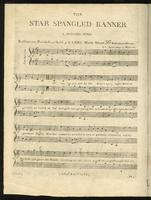 The earliest edition of the song printed with musical notation.