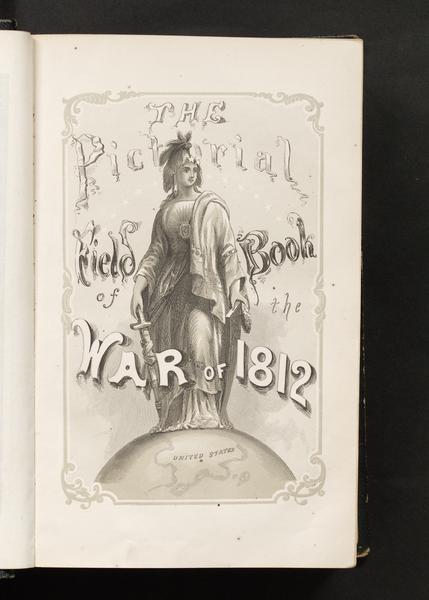 The pictorial field-book of the War of 1812, or, Illustrations, by pen and pencil, of the history, biography, scenery, relics, and traditions of the last war for American Independence / (1869, c1868.)

Accounts of the war began to be published nearly before the war was over. Indeed, at least one book was originally intended as a defence of the ongoing war, but was published after the peace and  titled to reflect that fact. Many of the earliest books were written by government officials, journalists, or former soldiers. One of the first historians to write about the War of 1812 was British naval historian William James. He was detained in the United States when war was declared, but eventually escaped detention and found his way to Nova Scotia in late 1813. Hearing American boasts about the war prompted him to write a history of his own, defending the British navy in particular. He wrote a short naval history and then a fuller account of both land and sea battles, both published very soon after the war ended.

Historical writing on the war has often focused on naval matters. James Fenimore Cooper’s wrote a history of the U.S. navy motivated partly by his own experiences at sea. Theodore Roosevelt’s Naval War of 1812 was published to help support a political agenda that favored the expansion of American naval power.

Other books about the war were made for a more popular purpose. Benson J. Lossing was a prolific author of illustrated books on American history. He published accounts of the Revolutionary war and the American Civil War, in addition to his Pictorial Fieldbook of the War of 1812. His works were profusely illustrated and full of facts and anecdotes, rather than historical analysis.

A defense of the war turned into history

Alexander James Dallas. An exposition of the causes and character of the late war. Boston, Printed and published by Thomas G. Bangs, 1815.

Dallas, a Pennsylvania attorney and statesman, served as Secretary of the Treasury under President James Madison for two years beginning in October 1814. He is credited with bringing the government’s finances out of the ruin caused by war, in part by the founding of a national bank. He also briefly served as acting Secretary of War and Secretary of State in 1815. This manifesto was written in late 1814 as a statement of American grievances against Great Britain. It is said to have met with the approval of President Madison who wished to publicly endorse it as a product of the government. The success of peace negotiations at Ghent prevented the official issue, however.

A history with "important documents"

Thomas O'Connor. An impartial and correct history of the war between the United States of America, and Great Britain. New York, J. Low, 1815.

Grandson of an Irish antiquary, O’Connor emigrated from Ireland in 1801 and worked as a writer, editor and newspaper publisher. He worked for Samuel Woodworth, publisher, poet, and dramatist, for a few months editing the newspaper The War. He was later co-publisher of a paper called the Military Monitor, issued weekly. His history of the War of 1812 was popular; it came out in four editions over the course of two years. The book also included the text of important primary documents, such as the declaration of war and the Treaty of Ghent.

A history printed in Kentucky

Michael Smith. A complete history of the late American war with Great-Britain and her allies : from the commencement of hostilities in 1812, till the conclusion of peace with the Algerines in 1815.... 6th edition. Lexington, Ky. : Printed for the author, by F. Bradford, 1816.

Born in Pennsylvania, Smith settled in Upper Canada near Lake Erie in 1810, lured by cheap land. He traveled in Canada gathering material for a book later published as A Geographical View of Upper Canada. He and his family returned to the United States in 1813 after experiencing harassment as Americans in enemy territory. He published this account of the war after settling in Lexington, Kentucky where he worked as a teacher and Baptist minister. Appended to the history of the war is his Narrative of the Author's Sufferings in Canada with his Family, and Journey to Virginia and Kentucky, beginning on page 231 (image 235).

Cooper's history of the U.S. Navy

James Fenimore Cooper. The history of the Navy of the United States of America. Philadelphia : Lea & Blanchard, 1839.

As a young man, recently expelled from Yale, Cooper spent nearly three years at sea, first on a merchant vessel and then two years in the U.S. navy. This experience left a significant mark in his fiction, but also prompted him to write this history of the navy during a hiatus from fiction writing. Cooper’s description of the War of 1812 begins in volume two, on page 92 (image 98) he wrote about the “short-sighted and feeble” American naval policy in the years preceding the war.

A densely illustrated guide to the war

Benson J. Lossing. The pictorial field-book of the War of 1812, or, Illustrations, by pen and pencil, of the history, biography, scenery, relics, and traditions of the last war for American Independence. New York : Harper & Brothers, 1869.

Lossing was a publisher of newspapers and magazines in Poughkeepsie, New York. He and his brother-in-law founded a wood-engraving firm that became the most prominent supplier of such illustrations to book and magazine publishers in New York state. He published many illustrated books on American history. His Pictorial Fieldbook of the War of 1812 included 882 illustrations in its forty-three chapters, including portraits, reproductions of the signatures of famous men and maps depicting battle sites.

Roosevelt's history of the naval war

Theodore Roosevelt. The naval war of 1812; or, The history of the United States navy during the last war with Great Britain. New York, G. P. Putnam's sons, 1882.

Roosevelt began writing this book while still in college and published it just after he was elected to the New York Assembly at the age of twenty-three. In his preface, he discussed the value of the histories written by William James  and James Fenimore Cooper. He also subtly stated the contemporary purpose of a new history:  “The subject merits a closer scrutiny than it has received. At present people are beginning to realize that it is folly for the great English-speaking Republic to rely for defence upon a navy composed partly of antiquated hulks, and partly of new vessels rather more worthless than the old.” (page v, image 13)

← Feuds & Controversy
Commemorations →
After the War
Historians Remember the War