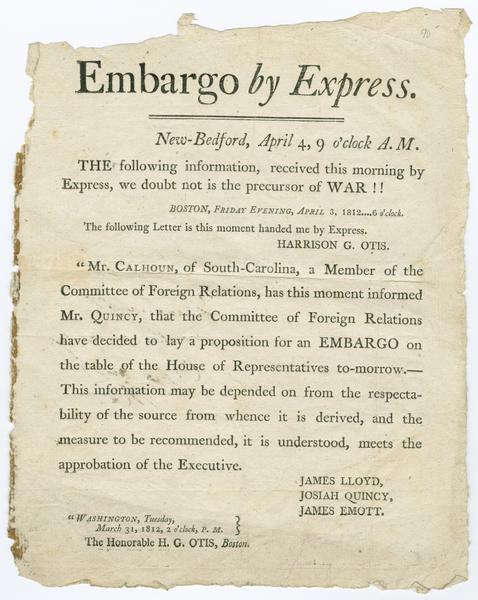 In 1803, a two-year peace between Britain and France broke down, and the two nations resumed a series of conflicts that originally began in 1793. Control of trade in the Atlantic was of great importance to both sides as they tried to deprive the enemy of material support coming in from neutral sites, such as the United States. Governments of all three nations struggled to protect commercial interests and limit trade with the enemy.

Starting in 1807, British cabinet ministers issued several sets of Orders-in-Council that sought to control neutral trade with the Continent. The orders did not shut down all trade, but caused much difficulty for American merchants with a variety of requirement for special licenses, shipping material through British ports, and outright embargo. Napoleon also issued a number of decrees restricting neutral trade with the continent, but they resulted in few actual consequences.

President Thomas Jefferson, and his successor James Madison, sought to counter these measures with laws based on the Republican belief that denying Britain and the Continent the privilege of trading with the United States would garner concessions. A series of laws, later known as the “restrictive system,” sought to prevent the use of British licenses and restrict imports and exports. Most notable among the laws was the Embargo Act of 1807 which forbade all American exports. The law was extremely unpopular with American merchants and traders, caused serious economic harm throughout the United States, and was regularly defied as evidenced by widespread smuggling activity, especially between New England and British North America.

A senator against the embargo

James Hillhouse. Speech, in the Senate, December 21 [1808] on the bill making further provision for enforcing the embargo. Baltimore: Printed by J. Robinson, 1808.

In this published speech, Senator James Hillhouse of Connecticut speaks out against legislation to enforce the current embargo:  “…I do consider this to be an act which directs a mortal blow at the liberties of my country; an act containing unconstitutional provisions, to which the people are not bound to submit, and to which in my opinion they will NOT submit.” Hillhouse later served as a delegate to the Hartford Convention. 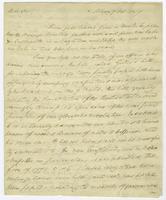 Correspondence of a prominent Federalist

Robert Troup was a well-known attorney and Revolutionary War veteran, and a close friend of several prominent Federalists, such as Alexander Hamilton. In this letter, he writes to artist and fellow veteran John Trumbell about the Embargo Act and opposition to the measure in the eastern states. Read other letters by Robert Troup describing the political enviroment leading up to war.

In this letter, U.S. Secretary of State Robert Smith urges the U.S. Minister to Great Britain,William Pinkney, to press British authorities to repeal its blockade. The letter is in the hand of a secretary. 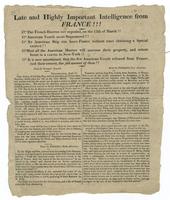 A broadside reporting on French trade restrictions published in 1811. French attempts to control trade were as common as those of the British. French enforcement of restrictions was minimal, however, leading to greater friction with Britain. 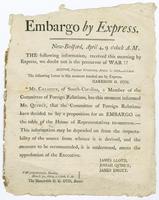 Believing war to be only days away, President Madison declared an embargo on April 4, 1812, in an effort to keep American ships in port and out of the hands of the British. This Massachusetts broadside announces the unpopular legislation. 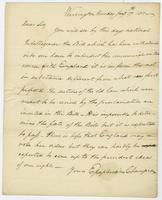 In this letter, Connecticut Congressman Epaphroditus Champion writes to merchant Timothy Green to report on ongoing legislative action related to the restrictive system and the British Orders-in-Council. He wrote: “There is hope that England may revoke her orders but they can hardly be expected to come up to the president’s ideas of our rights.”