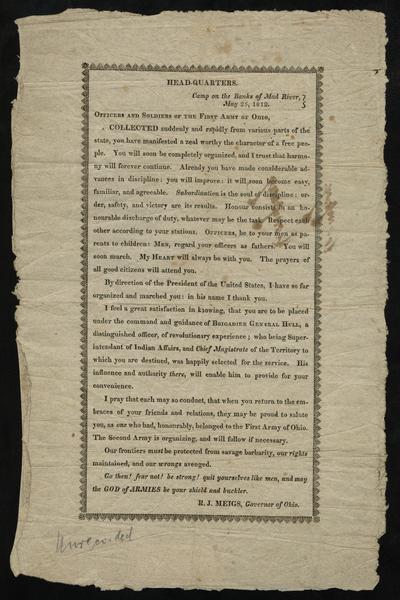 The United States was ill-prepared to begin the war, especially lacking in numbers of ground troops, so the fall of 1812 began slowly with a less than successful multi-pronged attack on British North America. Brigadier General William Hull led a force of regulars and militia across the wilderness of the Old Northwest, cutting a road as they travelled, intending to use Detroit as a base of operations in the region. As Hull settled in to Detroit, British forces in Canada moved to seize Fort Mackinac (also known as Fort Michilimackinac) located at the strategic straits between Lake Michigan and Lake Huron. They took possession of the important fur trading post on July 17, 1812, without much resistance.

British and Native American raids along the road captured some of Hull’s papers and threatened his supply lines. News of the fall of Fort Mackinac further alarmed  General Hull, causing him to abandon his offensive plans and remain in place at Detroit. Though British and Native American troops were far fewer and farther away than he feared, Hull waited at Detroit until Brigadier General Isaac Brock began to mount a siege. Craftily, Brock let it be known that he was not sure he could control the native warriors in the heat of battle. The prospect of a massacre tipped the already fearful Hull over the edge. On August 16, 1812, he surrendered Detroit with barely a shot fired, and was court-martialed for treason and cowardice in 1813.

Governor's send-off to the Ohio militia

Return Jonathan Meigs. Address to the officers and soldiers of the First army of Ohio. Ohio, 1812.

Though the text of this broadside is short, it is rich with intimations of the military’s unpreparedness and a sense of hope that would soon be dashed. The governor of Ohio, Return Jonathan Meigs, adresses the members of the first army of Ohio that “will soon be completely organized” and “have made considerable advances in discipline” and places them under the command of Brigadier General Hull, “a distinguished officer of revolutionary experience.”

James Foster. The capitulation, or, A history of the expedition conducted by William Hull, Brigadier-general of the northwestern army. By an Ohio volunteer ... Chillicothe: Printed by James Barnes, 1812.

A first person account of a member of the first army of Ohio, this volume reprints the text of the broadside described above. It goes on to describe enthusiastic volunteer soldiers soon faced with challenges. They marched to Dayton where no preparations have been made to host the troops and experienced problems with travel and forage for pack animals (page 19). The description of Hull’s surrender begins on page 73. 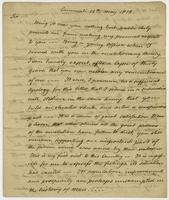 A hopeful letter from General Hull

Letter from Brigadier General William Hull to Charles Scott. May 12, 1812.

Hull and Scott were both veterans of the Revolutionary War, and in this pair of letters they regret the passing of so many of their fellow veterans, and express great hope for the coming conflict. Hull wrote, “Altho’ I am advanced in years, I am again entering on a military life. I only hope I may be useful to my country.” Scott replied, “…I rejoice that the weight of years has not unfitted you still to bear an honorable and useful part, in the approaching conflict…” Read Scott's reply to Hull's letter.

Report of the trial of Brig. General William Hull : commanding the north-western army of the United States ; by a court martial held at Albany on Monday, 3d January, 1814, and succeeding days, taken by Lieut. Col. Forbes. New York: Eastburn, Kirk, and Co., 1814.

A compilation of testimony and documents from Hull’s court martial, this volume includes the judgement of the court delivered on March 26, 1814. The court “…after due consideration do sentence him to be shot to death, two thirds of the court concurring in the sentence. The court in consideration of Brigadier General Hull’s revolutionary services, and his advanced age, earnestly recommend him to the mercy of the President of the United States” (page 119, image 283). President Madison commuted the sentence and Hull left the army. Read other documents related to Hull, his surrender, and the trial.