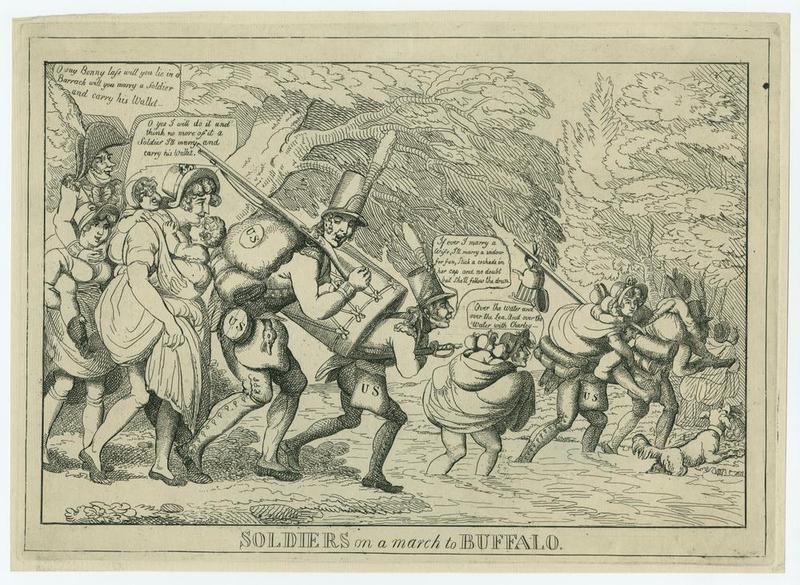 Soldiers on a march to Buffalo

Since Republican administrations favored the use of state militias over the formation of a national standing army, the United States Army was not in a position to provide all the soldiers needed. President Madison called for the states to detach a portion of their militia forces for national service, but his call was met with mixed success. Some states were eager to contribute troops, but others, especially in New England, were less enthusiastic about providing men for a war effort they opposed. Reliance on militia presented a number of other problems. Many were poorly equipped, only marginally trained, and in many cases a militiaman’s term of service was only a few months, making it hard to depend on militia on a continuous basis.

Similarly, Republican ideology that favored state power over federal power had slowed the pace of naval construction to a crawl in the decade before the war. Once war became imminent, the government hurried to build a variety of ships that could defend the Atlantic coast, patrol the Great Lakes, and harass British trade. Private vessels also played a role in the war, rarely fighting, but focusing on the pursuit and capture of enemy commercial traffic. This was the last major conflict in which privateers were widely used .

A humorous view of the militia

William Charles. Soldiers on a march to Buffalo. no date.

Though Charles was generally supportive of the Republican party's pro-war stance, it did not prevent him from publishing an irreverent depiction of unprofessional militia traveling with women and children. On the far left, an officer is being carried by a woman. This image is directly taken from an 1808 print published in England by Rowlandson.The image is reversed, as it would be if Charles copied the image in the easiest way possible, and the artist has added "US" labels onto some of the soldiers' equipment.

Advice on defense from a Frenchman

Maximilian Godefroy. Military reflections, on four modes of defense, for the United States, with a plan of defense, adapted to their circumstances, and the existing state of things. Baltimore: Printed by Joseph Robinson, 1807.

Godefroy was a French architect who lived in Baltimore during the War of 1812. His wife, Eliza Anderson, part of a prominent Baltimore family, translated this work. In this short work, Godefroy gave his accumulated wisdom on modern warfare based on his experience in Europe. He wrote: “Men and things have much changed since the peace of 1783. At present, a war with certain European powers, would as little resemble the war which terminated in your independence, as that war resembles those of Attila.” He evaluated four means of defense commonly discussed in the United States (74-gun ships, gun-boats, fortifications, and militia) and made his own recommendations for defense (free corps, temporary fortifications).

Advice on defense from an American

Williams commanded the U.S. Army Corps of Engineers at the time this pamphlet was published. It reproduces a letter in which he advised the Corporation of New York on the interaction of boats, obstructions, and fortifications: “If we were to have batteries without gun boats and obstructions an enemy might pass. If we were to have obstructions without force to protect them, the enemy would leisurely remove the dangerous parts, and go between the others. Thus, you see sir, that in my opinion, although a reliance on one mode might be illusory, the whole combined would certainly protect the Narrows, and insure security and tranquility to this opulent city” (page 13). On the previous page, Williams also endorsed the use of torpedoes and countered arguments against the “inhumane tendency” of these machines. 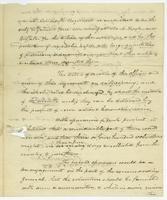 How to retain militia

Letter from Major General Henry Dearborn to Brigadier General Peter B. Porter. May 6, 1813.

As commander of the American forces in the Niagara frontier, Dearborn wrote to a fellow general about efforts to recruit and retain militia: “The times of service of the officers and men of the regiment are daily expiring; and the whole will be discharged by about the middle of the month unless the can be detained by the prospect of some active and honourable service. With appearances of such prospect, it is believed that a considerable part of them would remain; and that three or four hundred volunteers might in three or four days be collected from the country to join them.”

Advice from Washington, used by the British

A military view of the United States, and their vulnerable points exposed by a reference to the conduct and opinions of General Washington. London: W. Wilson, 1813?

Armstrong was U.S. Secretary of War during most of the War of 1812, until he was forced to resign after the burning of Washington. This book recycles the work of other writers. Many other books of advice, and published rules and regulations are included in the project, including Amasa Smith's A short compendium of the duty of artillerists. Browse other books on military dress and regulations.