On February 16, 1815 the United States Senate unanimously approved the Treaty of Ghent, and it was signed by President Madison the same day. It was mid-March by the time New Orleans heard the news, and it took weeks more for the outer reaches of the frontier to learn of the treaty.

Report of the Treaty’s arrival

This notice of arrival of Treaty of Ghent in United States was printed in Rhode Island on February 13, 1815. It reproduces a letter sent from New York to Boston on Feburary 11, which reports: “This city is in perfect uproar of joys, shouts, illumiuations, &c.” In their haste to print the news, the typesetters have set the ‘n’ in ‘illuminations’ upside-down.

James B. Mathews. The toast: a new song and chorus on peace with America, and on plenty. Bath: Printed by J. Browne, 1815.

This British broadside celebrates the as-yet unratified treaty: “Since Peace with American brothers is made, / And both may rejoice in the comfort of Trade, / The bull-dogs on either side now go to sleep, / And fathers, and mothers, and wives cease to weep;”

The full treaty on one sheet

Albany argus extra. Feb. 21. An honorable treaty of peace, procured by the valor of the American arms, and the patriotism, perseverance and virtue of the supporters of the war. Albany, N.Y., 1815.

This broadside reprinted the full text of the treaty, as submitted to Congress by President Madison. Click the “Dowload PDF” link to read the small type. 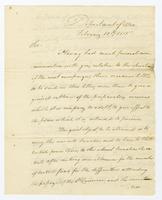 Monroe’s letter was written just one day before the U.S. sloop Favorite arrived in New York with the Treaty of Ghent. It talks of new plans for yet another invasion of Canada: “The great object to be obtained, is to carry the war into Canada,, and to break the British power there, to the utmost practicable extent. After making due allowance for the number of British forces, for the difficulties attending the passage of the St. Lawrence, and the immature state of our preparations, I think that we may enter into Canada and gain a decided superiority there next campaign.”