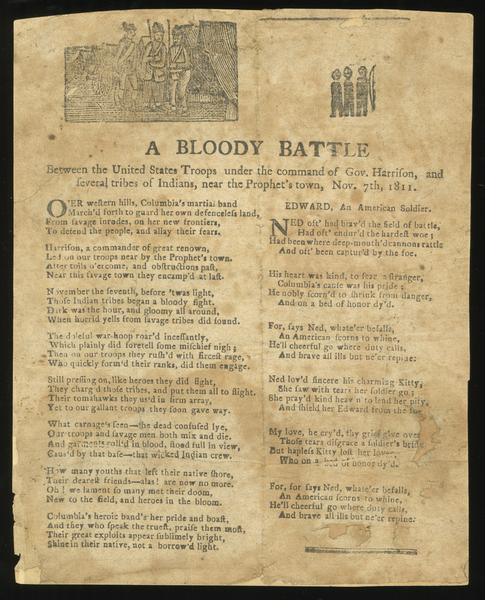 A Bloody battle : between the United States troops under the command of Gov. Harrison, and several tribes of Indians, near the Prophet's town, Nov. 7th, 1811. (1811)

Conflicts between U.S. citizens and Native Americans were frequent in the years before the war and many in the United States blamed Great Britain and its colonies for helping to arm the Native Americans. Indeed, for British North America, maintaining positive relationships with Native Americans in the porous borderlands was a sensible means of guarding against incursions by the much more populous United States. Those in the United States who were eager to strip natives of their land were more likely to frame the situation as one of British aggression.  It is too much to say that territorial desires had a significant role in sparking the War of 1812, but the opportunities for national expansion were an important side issue of the conflict.

Territorial ambitions were not focused solely on lands held by Native Americans. Some American politicians felt that the conquest of Canada would complete the business of the American Revolution, and residents of British North America had been nervous for years with their southern neighbor’s growing size and power. Similarly, some in the south saw a war as one means to move in on Spanish Florida and its native allies.

In the years before the War of 1812, many Native Americans were joining the growing Pan-Indian movement. Led by Tenskwatawa, a spiritual leader also known as the Prophet, and his brother Tecumseh, the movement’s political and military head, the Pan-Indian movement sought political coordination between groups to combat the deceptive land agreements that whites struck with random tribal members.

The Battle of Tippecanoe, fought on November 7, 1811, is often viewed as a prelude to the War of 1812. Governor of the Indiana Territory William Henry Harrison marched 1,000 regulars and volunteer militia toward the native village known as Prophet’s Town with the intent to destroy it and deprive Native Americans of a suspected base of operations. Native Americans met the force and suggested a parley. Harrison’s forces camped some way outside the town. Native forces attacked at night, killing nearly two hundred soldiers, but Harrison’s forces rebounded and with their greater numbers dispersed the attackers and proceeded to advance and burn Prophet’s Town.  The battle further damaged Anglo-American relations, as Britain was castigated for supplying weapons to the Native forces.

Life of Tecumseh, and of his brother the Prophet; with a historical sketch of the Shawanoe Indians. Cincinnati: E. Morgan & Co., 1841.

Drake, a Cinncinnati attorney, is best known today as an historian. His book on Tecumseh was based on interviews with living witnesses and is generally thought to be a reasonable account of the Pan-Indian leader’s life.

A Canadian View of American Interests/a>

Robert Christie. Memoirs of the administration of the colonial government of Lower-Canada. Quebec, 1818.

Chapter three of this account of Canadian history published shortly after the war gives the Canadian perspective on America’s interest in its northern neighbor:  “A war with Great Britain had been long contemplated by the rulers in America, and seasonable moment only was sought for, to grasp at these provinces which they had fallaciously been induced to believe were ripe for revolt, and would therefore fall a willing conquest to America.” (p. 35, image 37) 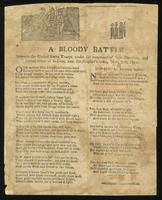 A Song About Tippecanoe

A Bloody battle : between the United States troops under the command of Gov. Harrison, and several tribes of Indians, near the Prophet's town, Nov. 7th, 1811. Boston, 1811.

A rare broadside ballad celebrating the victory at the Battle of Tippecanoe.