Significant military engagements outside of the Old Northwest and Niagara region were few in 1813. On the southern frontier, in what is now Alabama, Creek militants, known as “Red Sticks” attacked Fort Mims and wiped out its defenders, a force of approximately 250 militia along with white settlers, Lower Creek, and slaves. The Red Sticks are estimated to have suffered an equal number of causalities, but their attack on Fort Mims was termed a massacre and served to whip up American sentiment against the Creek Nation, leading to the Battle of Horseshoe Bend in 1814. Events at Fort Mims also escalated internal conflicts within the Creek Nation into a full-fledged civil war.

Nathaniel H. Claiborne. Notes on the war in the South; with biographical sketches of the lives of Montgomery, Jackson, Sevier, the late Gov. Claiborne, and others. Richmond, W. Ramsay, 1819.

Claiborne was part of the ‘executive’ of the state of Virgina. Described in the preface as “written while the war was going on,”this highly partisan book was notable for the attention it paid to the war in the South. On page 21 (image 27) he gives an account of the action at Fort Mims. 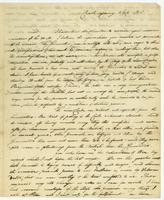 Views on the Seminoles and the Creeks

As a long-time Indian agent, Hawkins devoted much of his life to convincing Native Americans, particularly the Creek (Muscogee), to peacefully coexist with white settlers. In his letter to Lieutenant Colonel Gaines, he described relations with various groups of Native Americans on the eve of war: “I have had several meetings of the Chiefs who promise everything I ask of them and wish only for the fulfillment. We have recently arrested and whipped four persons for their crimes. I shall soon know whether they can punish the murderer of [Murdoch?], Lott, and some others in Tennessee, which the Chiefs of twenty one towns have solemnly and unanimously promised to do. If I find they prove treacherous I shall be as ready and willing to chastize them as I have been to civilize them.” The later execution of the murderers mentioned here was a central incident in the start of the Creek civil war.