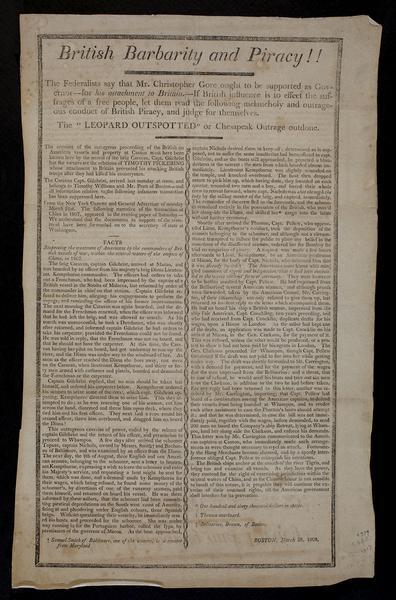 British barbarity and piracy!! : The Federalists say that Mr. Christopher Gore ought to be supported as governor--for his attachment to Britain ... (1808)

Another maritime conflict centered around impressment, the practice of forcibly conscripting men into naval service. The British navy, after years of war, experienced chronic difficulty recruiting crews for its hundreds of ships. Impressment was a major source of men, and experienced sailors who were also British subjects were prime targets. But just who was a British subject? The United States was a relatively new nation, and many of its citizens were born elsewhere. Modern systems of documentation did not exist. The brutal practice of impressment combined with ambiguity of citizenship status led to numerous conflicts.

In some cases the Royal Navy impressed American citizens, in others the Navy contended the conscripted were actually deserters falsely claiming American citizenship. In 1806 and 1807, ships of the British navy cruised off the coast of North America looking to intercept French ships known to frequent the area. The British often docked in Virginia to bring on fresh water and food, and this provided many sailors the opportunity to desert. Disputes between the two governments about the return of deserters were frequent.

The Chesapeake-Leopard affair brought the conflict to a boiling point, challenging not only so-called sailors’ rights, but also offending the sovereignty of the young United States. On June 22, 1807, the U.S. frigate Chesapeake encountered H. M. sloop Leopard in the Atlantic Ocean. The Leopard’s captain, Salusbury Humphreys had intelligence indicating the presence of deserters on board the Chesapeake, and he demanded the Chesapeake turn them over. Master Commandant Charles Gordon, of the Chesapeake, refused, and the Leopard fired on the American ship for a few minutes, killing five men and wounding several more. Unable to mount a defense, the Chesapeake surrendered, allowing the British to board and arrest the suspected deserters. The Chesapeake-Leopard incident further soured relations between Britain and the United States and helped lead to trade restrictions imposed by U.S. President Jefferson.

Seventeen years' history of the life and sufferings of James M'Lean : an impressed American citizen & seaman, embracing but a summary of what he endured, while detained in the British service, during that long and eventful period. Hartford: Printed for the Author by B. & J. Russell, 1814.

James M’Lean, a native of Connecticut, describes his life at sea, opening with a dramatic storm and the capture of a shark by those left on the slowing sinking brig Michael. His true purpose is to expose his suffering at the hands of the British, who impressed him three different times despite his protests of American citizenship and efforts to escape.

The right and practice of impressment, as concerning Great Britain and America, considered. London, Printed for J. Murray by W. Clowes, 1814.

An appeal for peace

Ten hints addressed to wise men; concerning the dispute which ended, on Nov. 8, 1809, in the dismission of Mr. Jackson, the British minister to the United States. Boston: From the press of J. Elliot, jr., 1810.

Published in Boston, Ten Hints is sympathetic to British efforts to patch up British-American relations after the Chesapeake-Leopard incident. The seventh hint (p. 25)  includes a concise description of the event and the response of David Montagu Erskine, minister-plenipotentiary to the United States of America. Erskine was replaced by Francis James Jackson after the British government found he had gone too far by promising to revoke the Orders-in-Council. 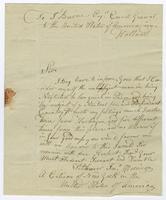 A letter from an impressed sailor

In 1808, American sailor John Morrison wrote to Sylvanus Bourne, the American Consul in Amsterdam, asking for help in securing his freedom from a Dutch prison. Orginally impressed by the British Navy, his ship was taken by the Dutch. He writes: “I beg leave to inform you that I Consider myself the unhappyist man in being Neglected to languish in Prison and being the subject of Neutral force and independent Country. It hurts my feelings much I wrote twice from Harlingen and five different times from this place and no Answer…” Read more letters to Sylvanus Bourne from impressed sailors.

Subtitled, “the ‘LEOPARD OUTSPOTTED’ or the Chesapeak Outrage outdone,’ this broadside describes a variety of alleged British offenses against American commercial vessels in Chinese waters, relating principally to impressment and the British response to charges of piracy against the schooner Topaze of Baltimore.