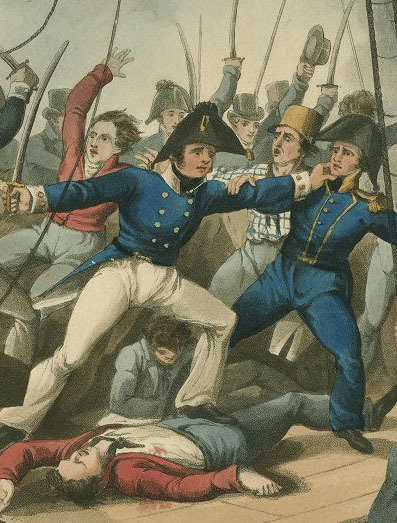 Over the course of 1813, the British navy under the direction of Admiral Sir John Borlase Warren extended its blockade of American ports up the coast, stopping just short of New England. The blockade interrupted but did not shut down U.S. commercial and military traffic completely. The Royal Navy never devoted enough ships to accomplish that end, and what ships did enforce the blockade endured hard use and had to return to England for any major repairs.

Early in 1813, United States Secretary of the Navy William Jones ordered American ships to patrol the Atlantic individually in an effort to interfere with British commercial traffic. He did not forbid military engagement with the British navy, but the intention was clearly to avoid major sea battles that could devastate the smaller American navy. Similarly, the British were meant to focus on the blockade, not battles. And yet, navies exist to fight and the British gained their first major victory at sea in the war in a battle that by some measures never should have happened.

In the early summer of 1813, Captain Philip Broke of the H. M. Ship Shannon sent away the rest of his squadron in hopes of luring out to sea the U.S. Frigate Chesapeake, newly refitted and under the command of Captain James Lawrence. The two ships met on June 1 somewhere south of Cape Cod and exchanged several broadsides. Captain Broke was unusual in the British Navy for his diligent focus on gunnery and his crew’s training paid off in the fight with Lawrence’s less experienced officers who had served together on the Chesapeake only a few weeks. British marines and sailors boarded the Chesapeake and very bloody hand-to-hand combat left Captain Lawrence dying and his ship in British hands. Despite his loss in battle, Lawrence became idolized as a hero, forever associated with the apocryphal last words: “Don’t give up the ship.” 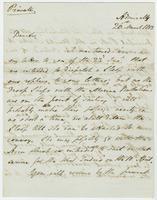 “Not a mere paper blockade”

As commander of the British navy along the North American coast, Warren was never had enough ships or men to execute the orders given him. This letter shows the challenges presented him: “You will receive by the present opportunity an order for blockading all the principal ports in the United States to the southward of Rhode Island & including the Mississippi, and we calculated that your force is amply sufficient to enable you to execute this service effectively. We do not intend this as a mere paper blockade, but as a complete stop to all trade & intercourse by sea with these Ports…” 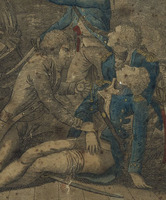 The Death of Lawrence

Dating from 1814, this print idealizes the death of Captain James Lawrence. His alleged last words fly on a banner above the scence: "Don't give up the ship." Members of his crew gather around, though the battle continues. Lawrence was mortally wounded in the battle, but he did not die until three days later. His crew was forced to surrender well before his death.

Biography of James Lawrence, esq., late a captain in the navy of the United States: together with a collection of the most interesting papers, relative to the action between the Chesapeake and Shannon, and the death of Captain Lawrence, &c., &c. New-Brunswick, N.J.: Printed and published by L. Deare, at Washington's head, 1813.

Published in 1813, less than three months after Lawrence’s death, this compilation of articles and testimonies was no doubt rushed to press to both satisfy public hunger for information about this war hero and to take economic advantage of that interest. The compiler wrote of a more lofty purpose in the preface: “The life and character of Lawrence as herein after described, and the respect shown to his memory, will, it is hoped, tend to excite the young sons of honour in our country to deeds of glory and renown. The example of the American hero no less illustrious for his country and fatal to himself, than that of Leonidas at Thermopylae, or of Nelson at Trafalgar…” (page 8, image 14).

"Shannon and Chesapeak" in verse

A British broadside celebrating the victory of the Shannon in verse. It ends:  “But brave Captain Broke though wounded and weak / He survives to again ply his cannon. / And his name from the shores of the wide chesapeak / Shall resound to the banks of the Shannon.”

A Visit to the Captured Chesapeake

Lieutenant R. [?] Saumarez served on a British ship enforcing the blockade of Boston and the Penobscot Bay area. He wrote in his journal of a visit to the Chesapeake, docked in Halifax, more than a year after its capture: “I went on board the Chesapeake. She is nearly as large as us and carried her guns much higher out of the water.” His comments continued with more observations on the ship’s guns and their placement (image 178).

George III and Madison in the ring

A Boxing Match, or Another Bloody Nose for John Bull. William Charles, 1813.

Charles published this fanciful print in the wake of one of the few U.S. naval victories in 1813. On September 5, 1813, the U.S.S. Enterprise encountered the H.M.S. Boxer off the coast of Maine. A brief but intense battle resulted in the death of the captains of both ships and the destruction of the Boxer.