Though the War of 1812 is often overshadowed by other conflicts, it was the subject of public remembrance at certain times and in certain places. Developing out of state-based groups of veterans and their descendents, the General Society of the War of 1812 was incorporated in 1894. Its goal is the preservation of the memory of the war, including documents and memorials related to the war, as well as programs to promote the study of the war and to foster patriotism in general.

Just as this web site was created on the occasion of the 200th anniversary of the War of 1812, many publications honoring the war and its participants were produced at the centennial of the War of 1812. The Niagara region, a very active site of wartime conflict, was a major site of commemorative events and associated publications. 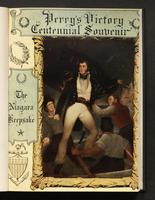 On the 100th anniversary of Perry's victory

Perry’s ship the “Niagara” was sunk for purposes of preservation in 1820 in Presque Isle Harbor. In 1913, the ship was raised and rebuilt, an effort celebrated in souvenir book: “…the people of Pennsylvania have raised the famous old brig from her long sleep at the bottom of “Misery Bay,” Presque Isle Harbor, Erie, Pennsylvania; they have lovingly rebuilt and refitted her; and they joyously are sending her on her gallant cruise through the Great Lakes this summer to salute the peoples of the vast empire of the “Old Northwest” which was won for the Stars and Stripes from the “Niagara’s” staunch deck. Can anyone be a Pennsylvanian and not exult in the complete success of this great patriotic achievement?” (page 7, image 9). 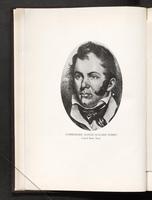 This substantial volume recounts the centennial events in the state of New York in great detail, including a program of the celebration of the Niagara’s arrival in Buffalo, the text of speeches, accounts of banquets and other public events, and many, many full page portraits of the members of the centenniel commission. A “Meeting of Colored People” in Buffalo is described beginning on page 93 (image 159) and a financial summary of the commission’s expenditures begins on page 99 (image 173).

History in a "convenient form"

This modest pamphlet brings together excerpts from a number of histories of the Battle of Plattsburgh and the naval victory on Lake Champlain. It was issued, “for the purpose of placing in convenient form the historical data relating to this battle and to aid those who may wish to speak or write upon this subject.” 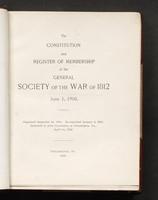 In this volume which compiles founding documents of both the national and state societies, the most interesting section is the state-by-state “necrology” beginning on page 235 (image 249)  which lists deceased members, including sons, grandsons, and great-grandsons of veterans of the War of 1812. The Society continues to accept only men for membership.

← Historians Remember the War
After the War
Commemorations