The OCIAA film Atacama Desert brings up the living conditions of workers in foreign-backed ventures, a topic Nelson Rockefeller worried about years previously.

Nelson Aldrich Rockefeller, the grandson of the oil capitalist John D. Rockefeller Sr., came to be the head of the OCIAA unconventionally. The heir of an estimated two billion dollar fortune back in 1942, Nelson Rockefeller dabbled in business, political causes, and charity work.16 Rockefeller embarked on a three-month, continent-wide tour of South America in 1937 with a small group of associates.17 The trip was a collaboration between personal interest, his family’s philanthropic organization the Rockefeller Foundation, and business concerns as the head of the affiliated Creole Petroleum Corporation. Starting in Caracas, Venezuela, Rockefeller and the group traveled through every country on the continent at the time, stopping to make deals and investments throughout the trip, including a stop at Creole Petroleum’s recently purchased oilfields at Lake Maracaibo in Venezuela.18 Historians point to this trip as the point where Rockefeller formed many of his opinions about the continent that would be the base of the OCIAA.19 He saw firsthand the vast natural resources to be tapped, but also the poverty and disease present in the region.20 When connected by his steadfast belief in capitalism, Rockefeller’s vision of U.S. involvement took hold. His thoughts on needing to raise the standard of living in Central and South America was furthered when he arbitrated negotiations between Mexico and international oil companies after the Mexican government nationalized key oil wells and equipment. Discussions with Mexican President Lázaro Cárdenas led Rockefeller to understand the need by foreign investors to uplift local communities and raise the standard of living, or else fear losing their entire investments to national uprising, “We must recognize the social responsibilities of corporations and the corporation must use its ownership of assets to reflect the best interests of the people. If we don’t, they will take away our ownership.”21 Soon after, Rockefeller started mandating greater community initiatives with the Creole Petroleum Corporation in Venezuela.22 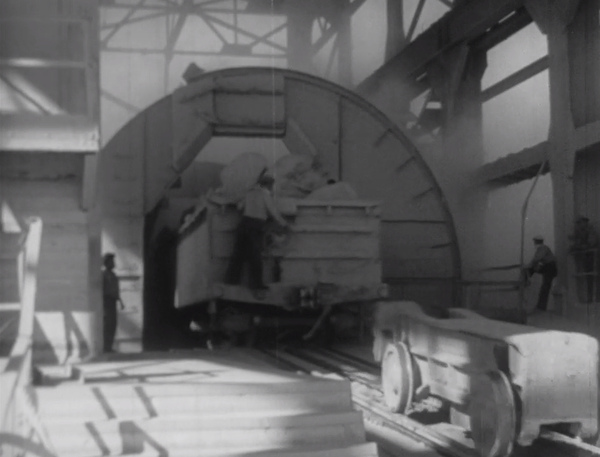 Nitrate is shown being transported while the narrator explains it made up upwards of 80 percent of Chile's exports.

In 1939, after the start of the war, Rockefeller continued to contemplate the role of foreign private enterprise and the U.S. government in the western hemisphere. On top of the existing problems Rockefeller saw in the region, added concern for these countries came from the war. In particular the reduced exports due to naval blockades,23 a shortage of commercial ships available to transit goods, and from a lack of diversity in economic potential in these mostly single cash crop or resource economies.24 The war was likely going to impact the stability of the region, and heighten tensions between foreign investors and the people. He regularly met with a group of prominent businessmen, nicknamed the “junta” to discuss these matters.25 The group formally wrote down their thoughts on investment, humanitarianism, and economic reform to be implemented by the U.S. in the western hemisphere in a brief thousand-word article titled “Hemispheric Economic Policy.” Rockefeller personally delivered the write-up to Harry Hopkins, an advisor and aide to FDR, on June 14, 1940.26 Hopkins immediately summoned Rockefeller to discuss the matter. Agreeing with Rockefeller, Hopkins brought the idea to the president, and after conferring with a group of cabinet officials to study the issues, made an executive order to establish the Office of Coordination of Commercial and Cultural Relations between the American Republics (OCCCRAR) that August.27 Rockefeller was soon appointed head of the new division under the State Department for an annual salary of one dollar.28 The department’s name would change to the Office of the Coordinator of Inter-American Affairs (CLAA) in 1941, and from 1945 until its end in May 1946 it was changed to the Office of Inter-American Affairs (OCIAA).29 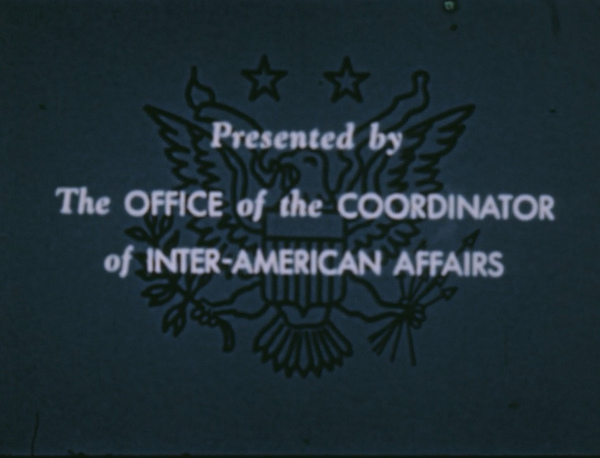 The OCIAA financed the creation of numerous films on South and Central America, as shown in the credits for The Hill Towns of Guatemala.

Roosevelt’s responsibilities as head of the OCIAA were to oversee and coordinate the economic, cultural, and intelligence mission of the U.S. in the western hemisphere between the various established departments in the federal government for the aims of the Good Neighbor Policy. Initially given a budget of 3.4 million dollars, the department enlarged quickly, spending over 140 million dollars by the end of the war and employing about 1300 employees domestically and abroad.30 The OCIAA was commonly involved with planning and implementing strategic military objectives with the U.S. military command, and economic and cultural policy agreements with the Department of State and Commerce and their subsidiaries. Rockefeller also partnered with non-profit organizations, like the similarly aligned, family-backed Rockefeller Foundation, to fund and carry out the office’s ideas.31 Connections between the OCIAA, the governments of South and Central America, and outside institutions were critical for the continuance of projects after the war ended. Several agreements cleverly allowed initiatives to retain funding to establish self-sufficiency after the OCIAA was officially disbanded in May of 1946. This was done either with partnerships between individual countries and private institutions or with a tiered five-year funding plan which structured increasing financial reliance on the host country. For example, the OCIAA would pay 100 percent of operating costs the first year and decrease project funding by 20 percent year-over-year until the partner country was paying the entire program cost by year five.32 A lasting impact was made by the department’s end as over 2000 projects were undertaken and 10,000 Latin Amercans were trained in a variety of key areas.33 The OCIAA focused on the economy, cultural image, and education of the region. 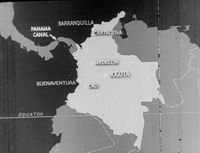 Maps were common in OCIAA films to familiarize viewers with new locations. Common with maps in OCIAA content, like this one of Colombia, are depictions of economic centers. 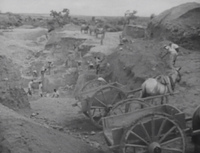 A shot of a Brazilian quartz mine. 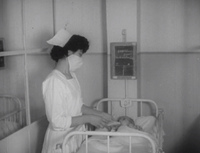 The OCIAA liked to showcase the modern medical facilities of South America in media, this time with a nurse feeding a baby. 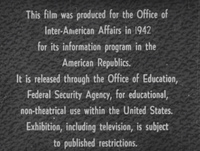 The beginning of This Is Ecuador showed the OCIAA's connection with the Office of Education as well as film fair use cases.