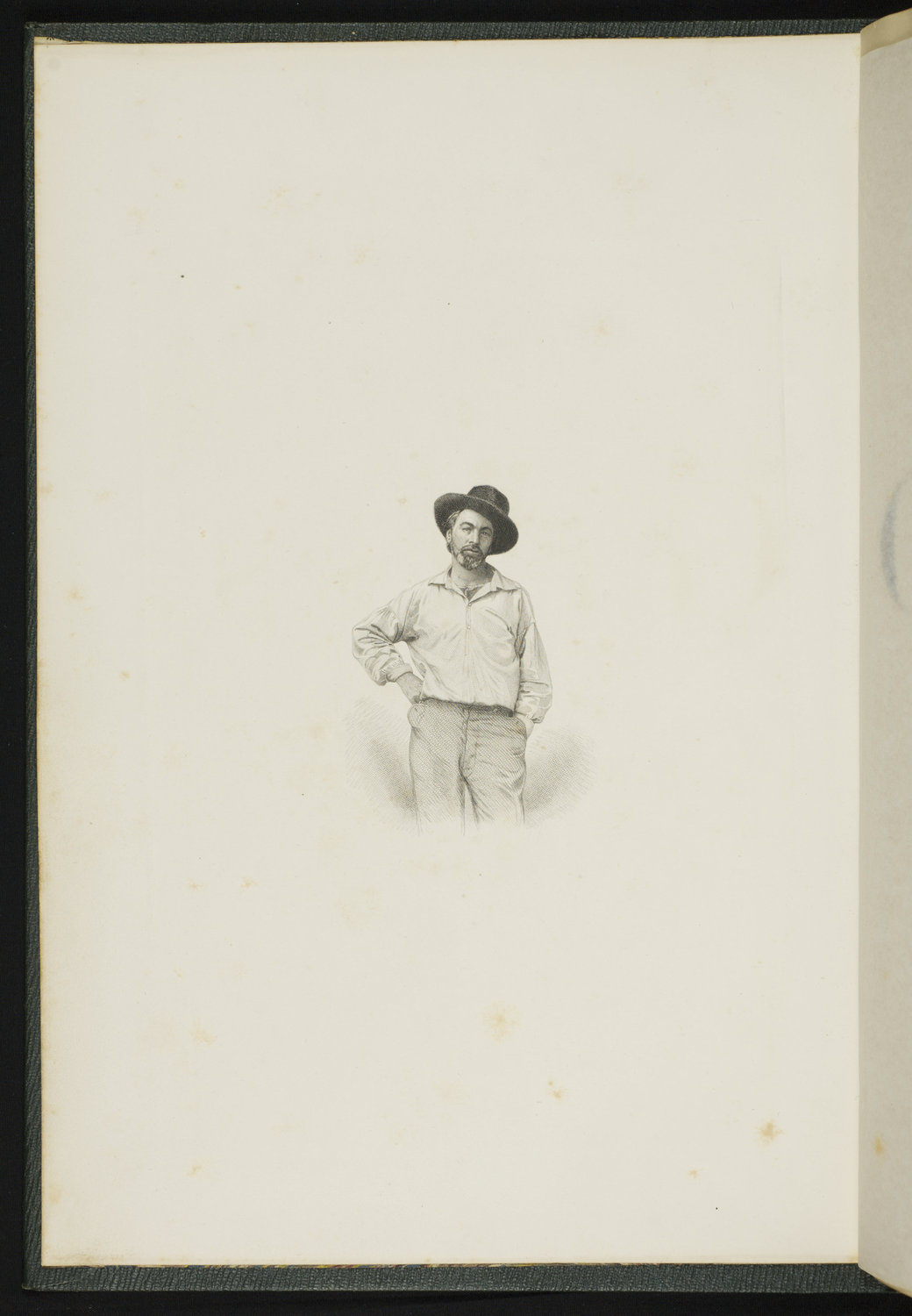 Shown here are the frontispiece and title page of the priceless first edition of Leaves of Grass, in a presumed first state of binding, second state of copyright page (Myerson, p. 14).  The Lilly copy features the bookplates of previous owners Albert Thorndike and J.K. Lilly (who purchased it from Goodspeed’s bookstore in  Boston) and a pasted-in label from booksellers Fowler, Wells & Co., Phrenological Publishers (“Professional Examinations available to visitors day and evening”), who offered Whitman's book for sale.   On p. 15, l. 10, the “I” is absent, a typographical error corrected in subsequent printings.   Shown here is the famous engraving by Samuel Hollyer, featuring a cocky-looking Whitman in an open-necked shirt, his hand resting provocatively on his hip, appears as a frontispiece, within an embossed frame, followed by ten double-columned pages of bewildering prose, conjuring a future for American democracy under the sign of a virile democracy.  Hollyer’s frontispiece, based on a daguerreotype by Gabriel Harrison, highlights the creative balancing act Whitman performs in this first edition—Leaves of Grass is both thoroughly modern (the poet’s costume; the double columns of prose; the free verse form) and traditionally artful (the engraving; the gold-stamping; the album format),  both popular and high art.  Whitman was out to unsettle his readers. 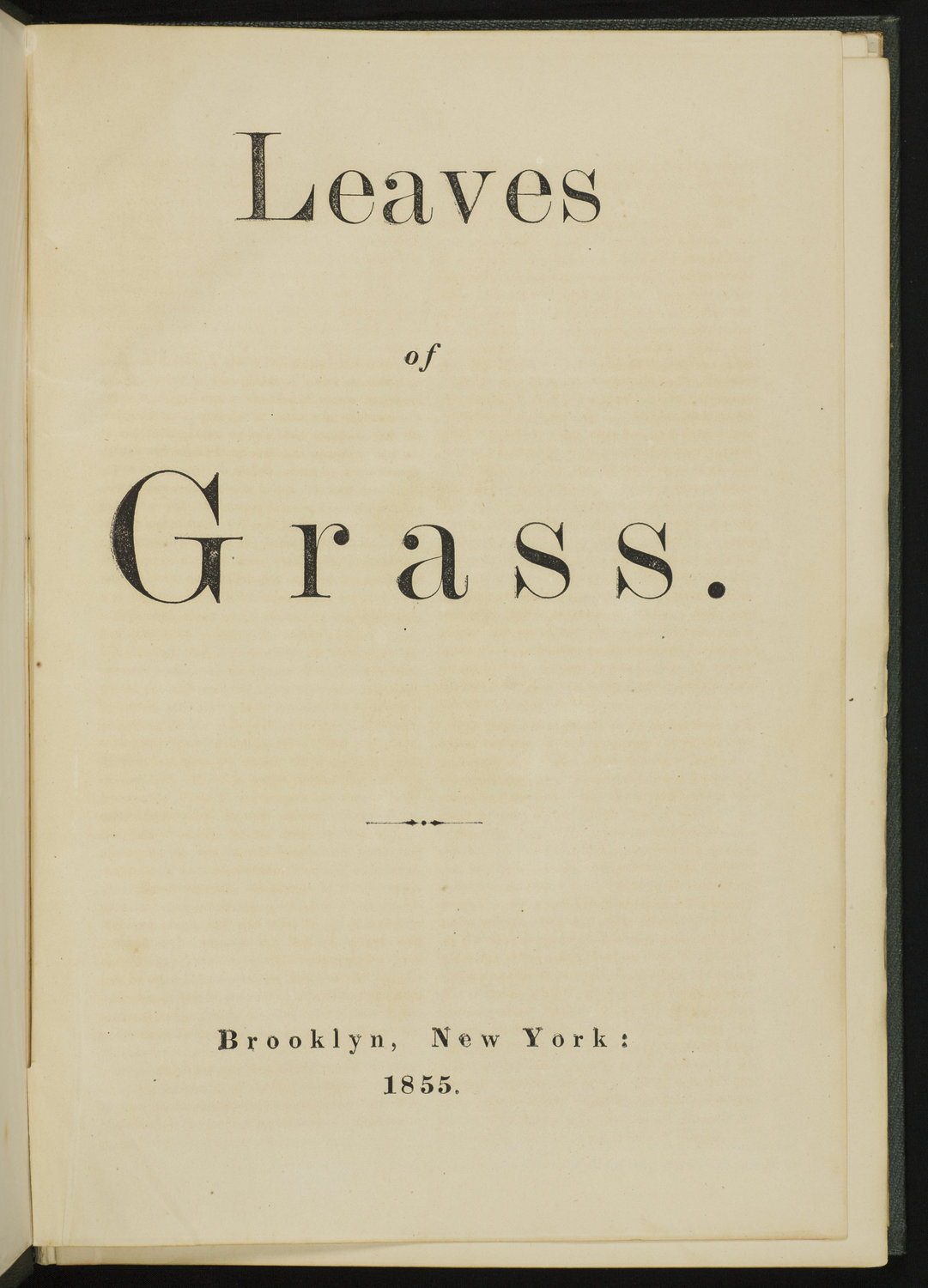 According to Myerson, 337 copies of the first edition in this binding were printed between June and July 1855.  The only place where Whitman’s name is mentioned is the copyright notice (“Walter Whitman”), though the speaker, later on, in the central poem of the book, “Song of Myself,” confidently identifies himself as “Walt Whitman, an American, one of the roughs.”  His poem produces him, Whitman wants to say, rather than he the poem.  And this is indeed how Leaves of Grass first appeared, since Whitman provided no other titles—not as a collection of separate works, but as one continuous poetic meditation.  Whitman was not only the (unacknowledged ) author of the book but also its printer and publisher, a combination of roles he retained throughout much of his literary career.   The 795 copies of the first edition—a thin quarto of 95 pages—were printed from type (i.e., no plates were produced), in the presence, and with the occasional participation of, Whitman himself, who sat in the Brooklyn workshop of the Rome brothers at Cranberry and Fulton Streets, supervising the production of his book from a chair especially reserved for him.  Whitman had long been interested in phrenology—a popular pseudo-scientific theory that assumed intellectual and emotional faculties manifested themselves in specific locations in the brain, which in turn caused characteristic, measurable bumps on the skull.  The “’Phrenological Cabinet” of Fowler & Wells on Nassau Street in New York was one of Whitman’s “choice places” in New York (Prose Works 2: 697), so it seems fitting that this is where his album-sized book went on sale ($1.25 for the cloth edition and 75 cents for the copies in wrappers).