IV. Waiting for You 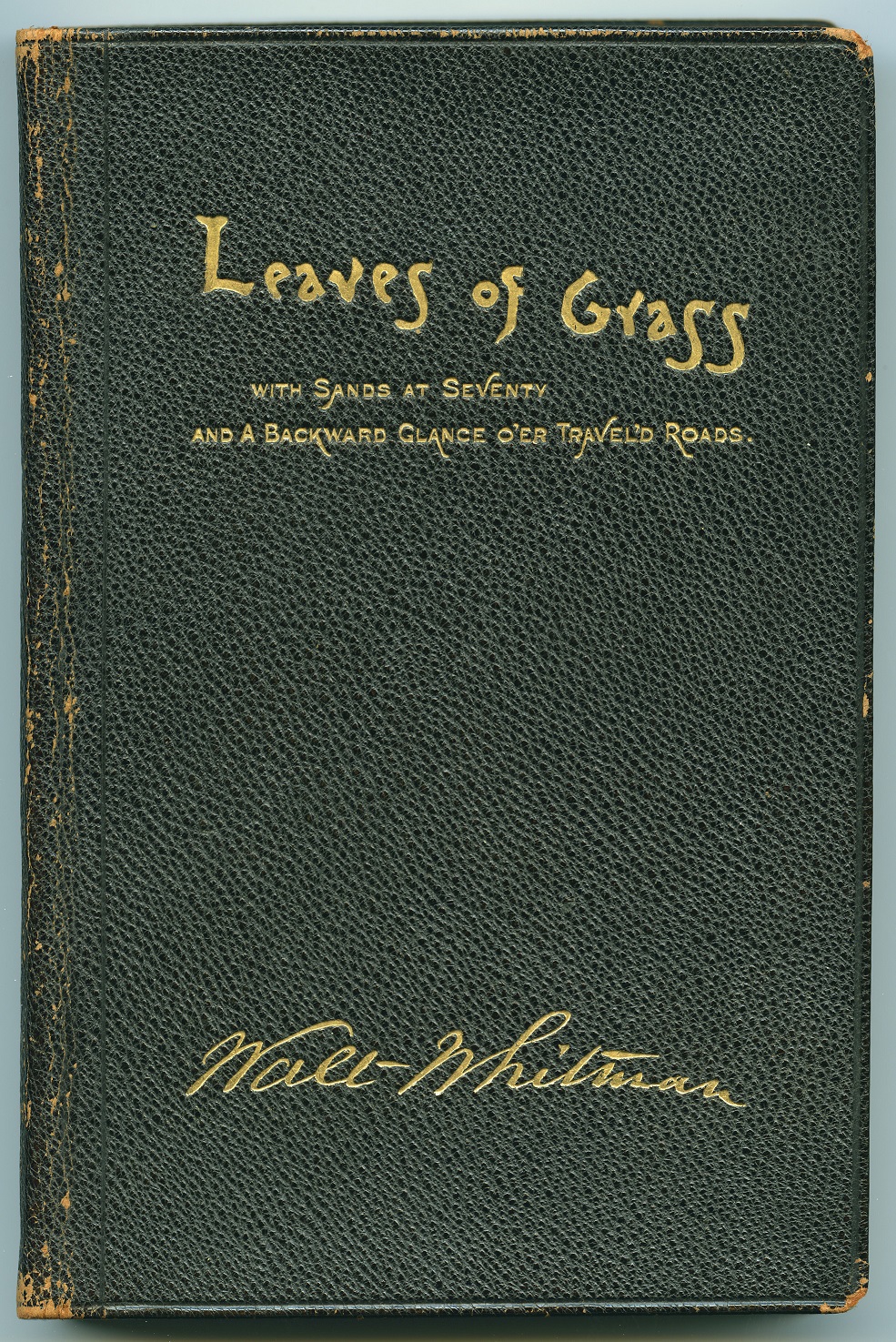 Failing to fetch me at first keep encouraged,
Missing me one place search another,
I stop somewhere waiting for you.
Whitman, “Song of Myself”

In 1884, Whitman declined his brother’s offer to move to a farm outside of Camden with him and bought a two-story house, the first he had ever owned, in a working-class Camden.   Gathering the results of his literary labors, receiving friends, and conversing with Horace Traubel filled the last years of his life, which brought him celebrity status and the level of acceptance he had so long desired.  His house at 328 Mickle Street, close to the tracks of the Camden and Amboy Railroad and the ships churning down the Delaware River, ensured that he was not out of touch with the teeming reality of city life that had ignited his imagination from the beginning of his career.

Featured here is the seventh edition of Leaves, fourteenth printing, according to Myerson, with Binding C (black leather over flexible boards).  This limited edition of 300 signed copies, bound in full leather, features no fewer than five portraits of Whitman, including the well-known portrait by Philadelphia photographer Frederick Gureskunst as frontispiece. 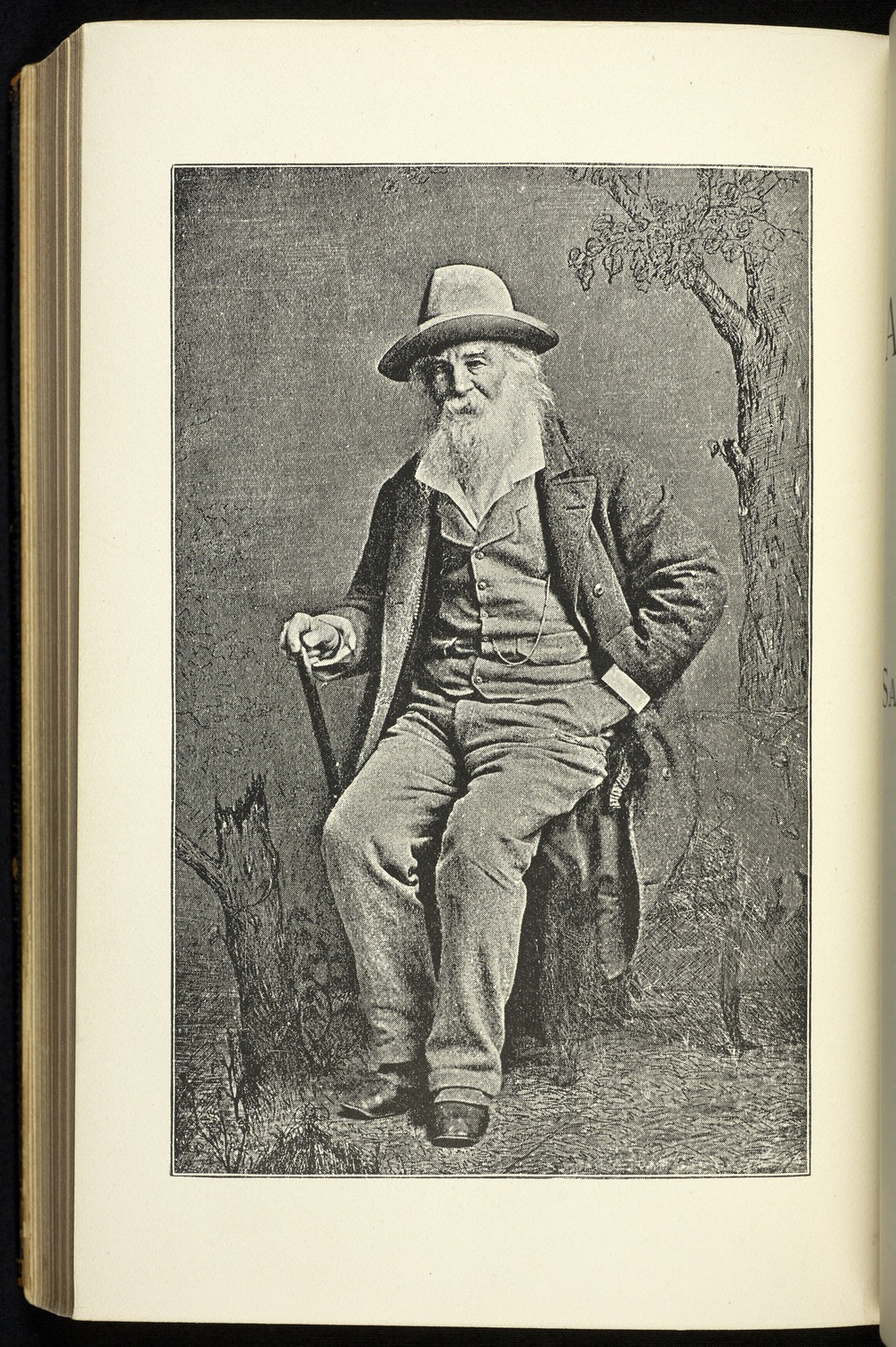 The volume was the product of a “fancy” he had, a vision of “a small special edition of L of G with Annex & ‘Backward Glance,’ all bound in pocket-book style pretty well, probably morocco, edges cut pretty close” (Corr.  6: 93). The Lilly's presentation copy was signed and inscribed by Horace Traubel in 1903. Traubel was by then Whitman’s literary executor, but his emotional attachment to his master had not waned:  “This book, dear Annie Rand and George Stearns, is the most precious of all:  and I offer it to you with a full heart. Let us cherish its reminiscence & keep it holy.”

Whitman's small edition contained “Backward Glance o’er Travel’d Roads” (for the first time) as well as  “Sands at Seventy," comprised of poems drawn from an earlier publication, November Boughs (1888).  The photogravure facing the title page of “Sands” was also first used in November Boughs and did not please Traubel, though Whitman liked it for the “ruggedness” it conveyed (Traubel 2:99, 199).

Traubel and Whitman had met in Camden, when Traubel was a fifteen-year-old boy working in a newsprint shop.  Over the years their relationship progressed to a point where Traubel would visit Whitman daily, becoming his amanuensis, companion, and errand boy, all at once.  Over two million words recording his conversations with Whitman were the outcome of Traubel’s devoted service.  Although he would write books of his own, Traubel devoted most of his life to preserving Whitman’s legacy, rendered all but invisible by the master's shadow.  In 1918, Traubel suffered a stroke like Whitman; a year later he died.  Only three volumes of his conversations had appeared by the time of his death (six more followed posthumously).

← Emancipation Proclamation
Camden's Compliment to Whitman →
IV. Waiting for You