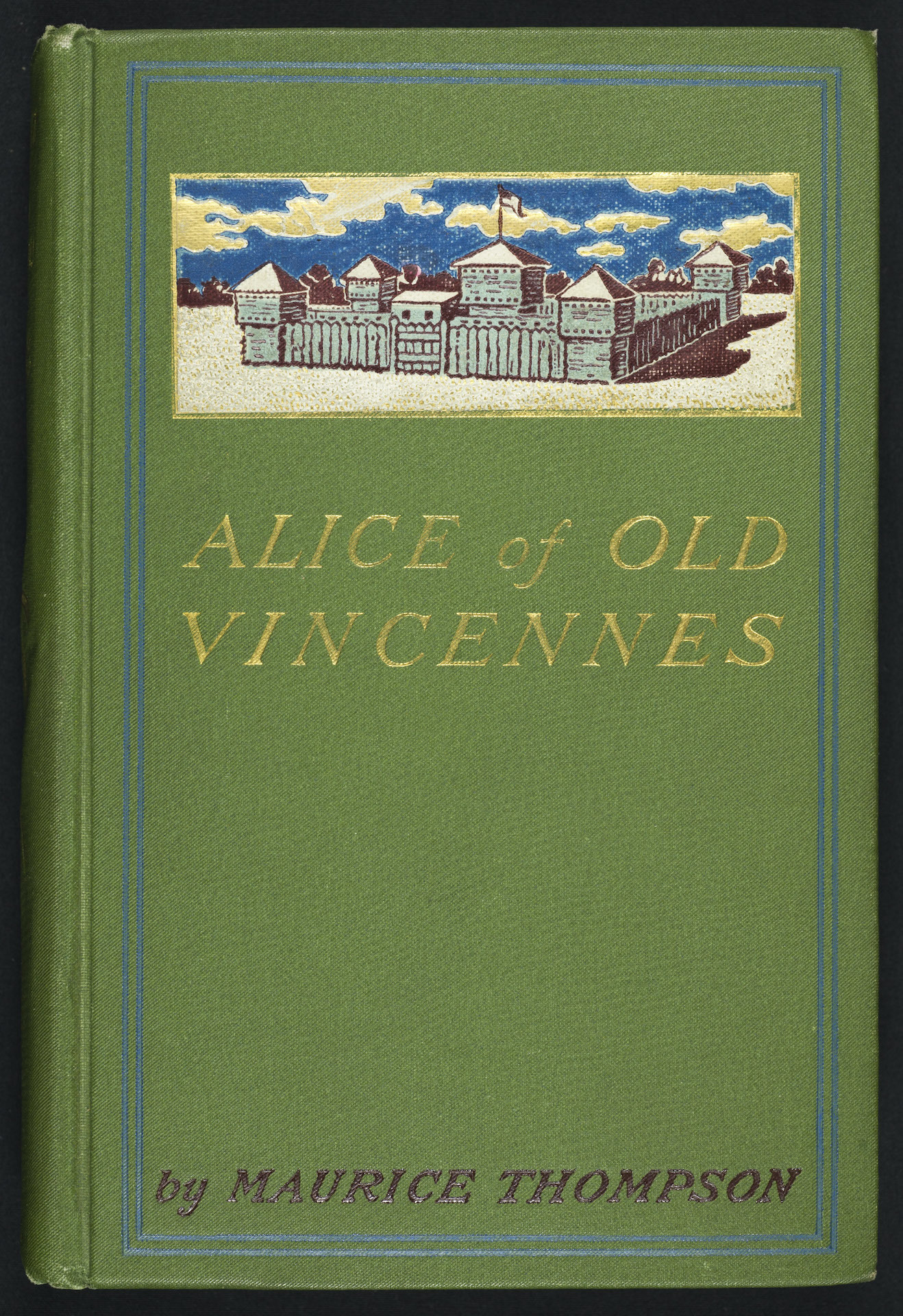 A Hoosier version of Longfellow’s Evangeline, set during George Rogers Clark’s campaign.  The novel’s orphaned heroine, Alice, opposes the advancing British forces by raising a homemade flag on the fort in old Vincennes. The British turn out to be corrupt and mean, and Alice, to everyone’s and her own relief, turns out to be not from Vincennes at all but from Virginia, which makes her marriageable material for the American officer Berkeley, a southerner who will take her home to his plantation surrounded by picturesque slave cabins.  This copy is inscribed (on both front and back endpapers, no doubt accidentally) by the author to Joseph Farrand Tuttle, the third president of Wabash College.  The illustrations are by F. C. Yohn.  Thompson (1844-1901), who was born in Fairfield, Indiana, fought in the Confederate Army for two years and then moved to Crawfordsville, Indiana, where he worked as an engineer for the railroad. 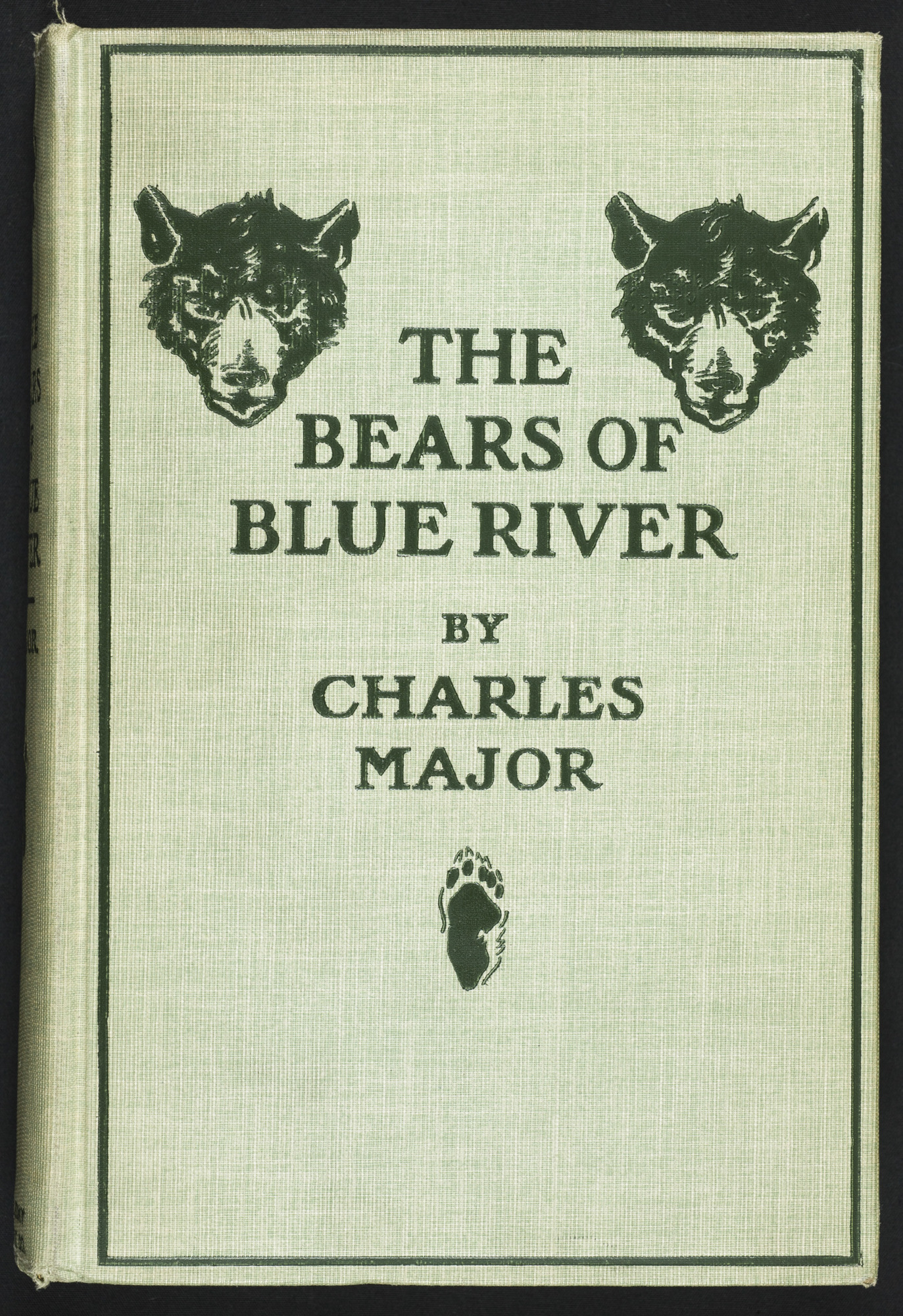 The Indianapolis-born Charles Major (1856-1913), while maintaining a small law practice in Shelbyville, Indiana, became a prolific and successful writer.  Bears of Blue River, set in Shelby County, takes readers back to the early days “when Indiana was a baby state.”  Balser, the fourteen-year-old hero, revels in the destruction of wildlife, especially bears. One of the novel’s redeeming features, apart from the precise descriptions of the landscape, is the fact that Balser himself is saved from almost certain destruction by a girl from neighboring farm, Liney Fox, who throws a torch at a bear he had failed to kill.  Illustrations by A. B. Frost. 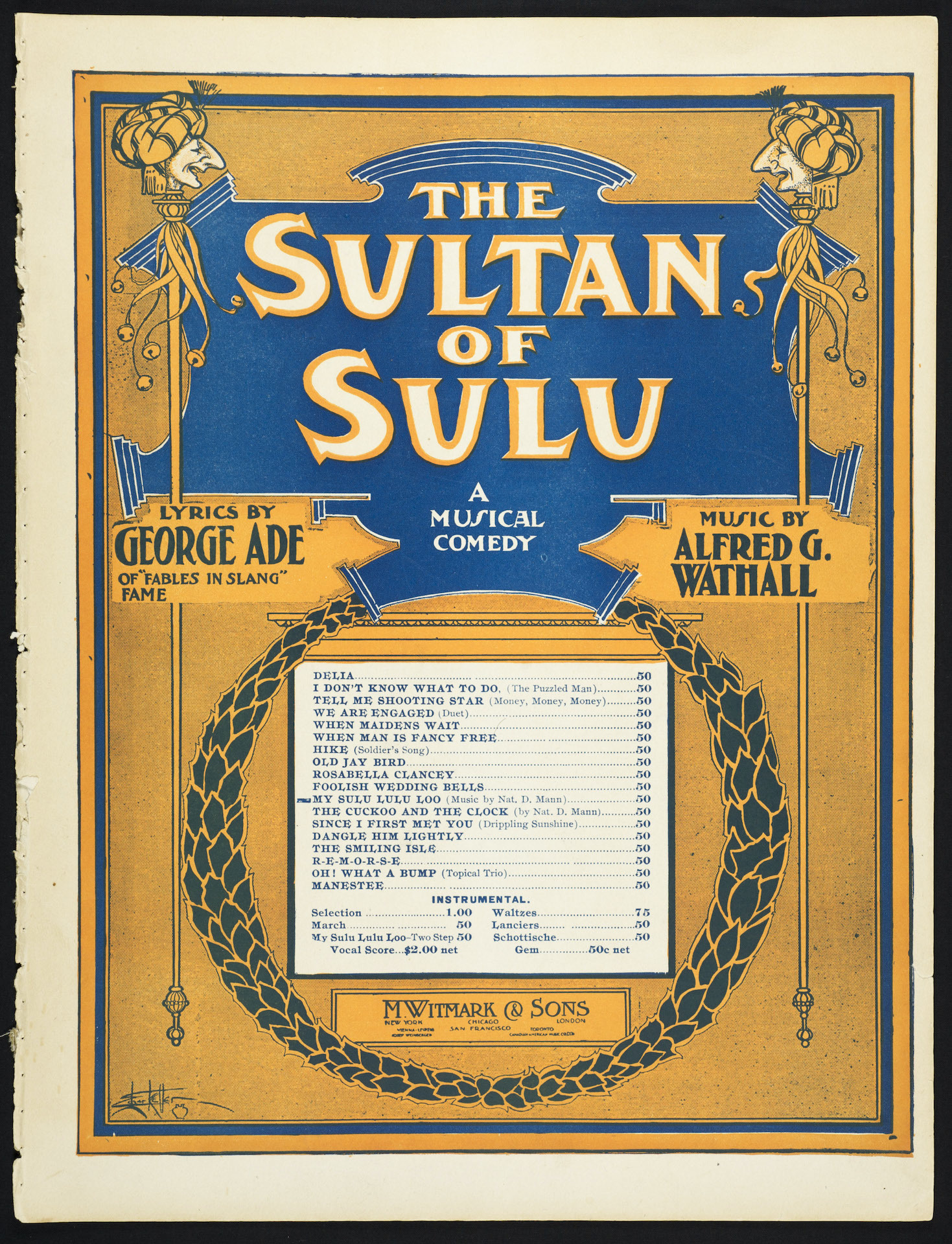 Born near Kentland, Indiana in 1866, Ade attended Purdue University and then became a newspaper reporter, developing a humorous writing style that catapulted him into a very successful writing career.   Ade’s musical The Sultan of Sulu, with music provided by the nineteen-year-old composer Alfred B. Whathall, became an immediate box office hit in 1902/1903.  Ade had been inspired to write the play by his recent visit to Manila, when he heard tales about the ruler of the kingdom of Sulu in the southern Philippines.  The comedy that took shape is a spoof of American imperialism, featuring the American colonel Jefferson Budd who has come to Sulu to inform the Sultan that “we will teach your benighted people the advantages of free government.” Surrounded by soldiers with bayonets, Kim-Ra surrenders, seeking relief in the one benefit of American civilization that is evident to him, the American cocktail, which is the subject of the musical’s hit song: “Those dry Martinis work for me / Last night at twelve I felt immense, / Today I feel like thirty cents.” Ade rushed his works into print as soon as semi-coherent lines had formed in his brain. During the heyday of his career, his royalties from performances exceeded $4,000 a week.  Author’s presentation copy to Indiana University. 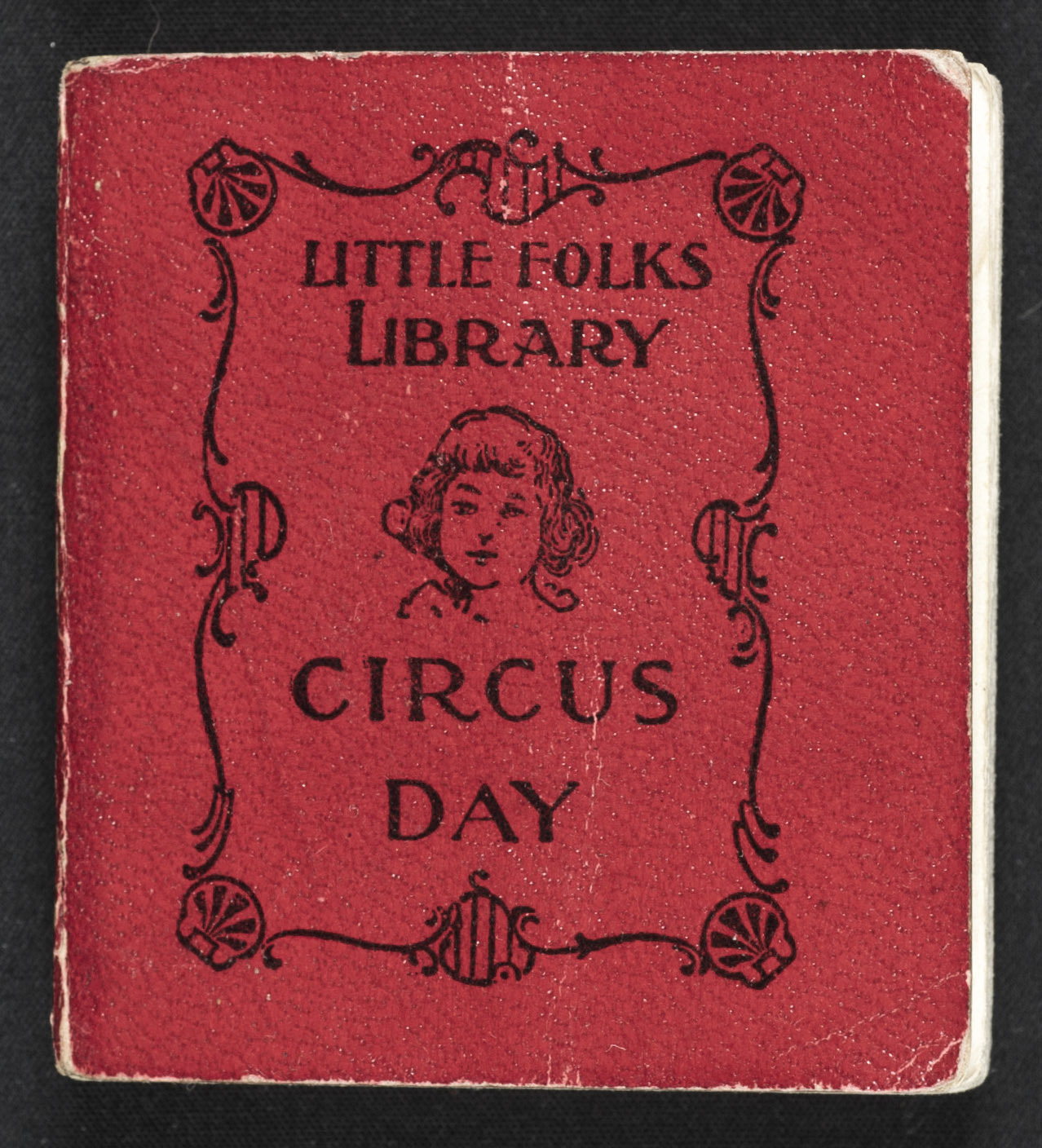 When a traveling circus comes to town, Joe Wallace and his friend Shaver Thompson go to great lengths, including borrowing money from parents and neighbors, to partake of all its delights, including the sideshow.  They never find the 100-foot-long snake promised by the poster.  Illustrations by John T. McCutcheon, brother of George Barr McCutcheon.  Written especially for the Werner Company, which marketed their miniature books as “vastly entertaining” while also having the dignified appearance of “Old Folks” books. 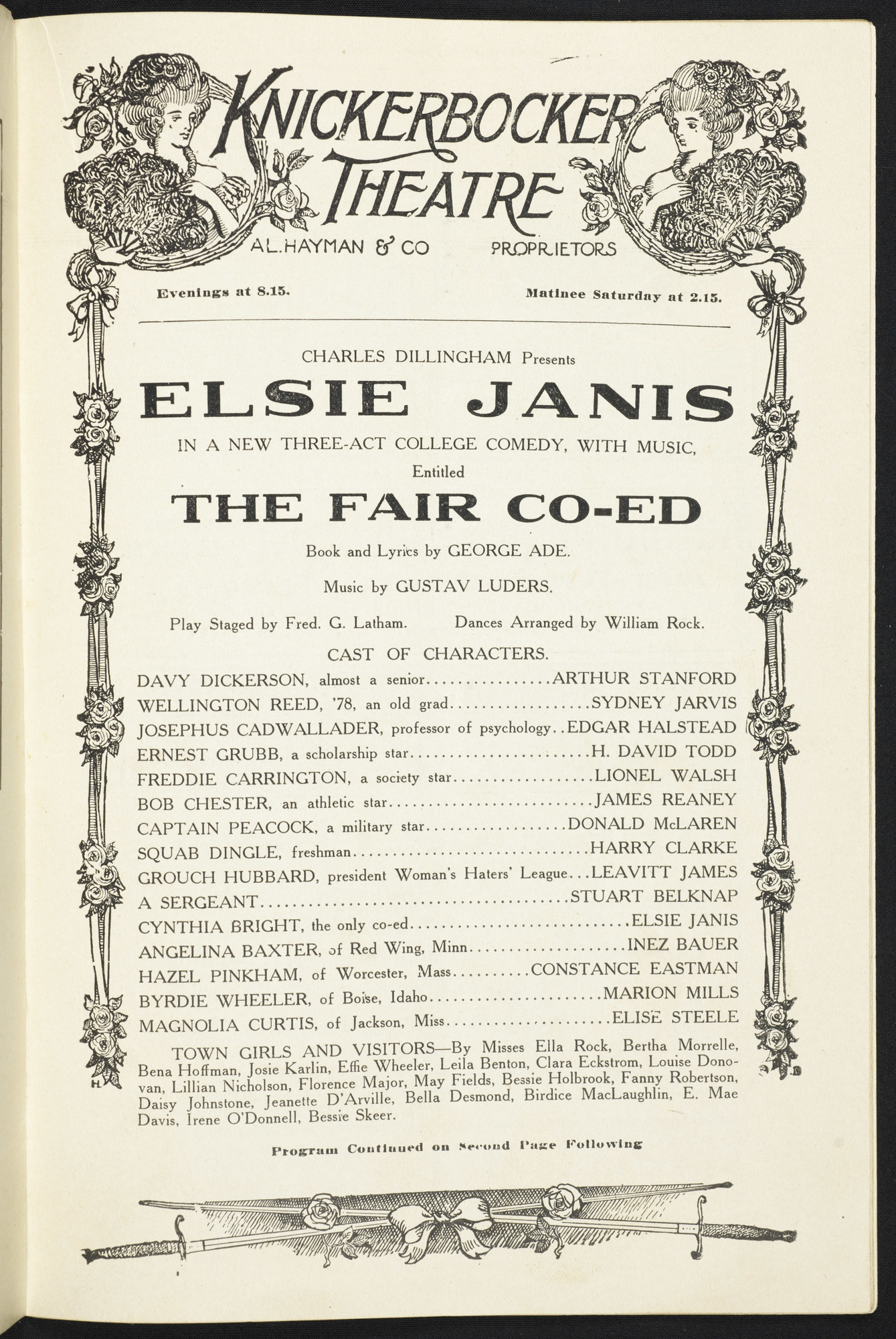 In this forgettable but effective comedy (music by Gustav Luders), which was originally written for the Harlequin Club at Purdue, Elsie Janis starred as Cynthia Bright, the only remaining co-ed at Bingham College, who is in love with Davy Dickerson, a lackluster student on academic probation.  Rather than leave college, Davy mans up, makes up his course work and passes the final exam, thus qualifying for Cynthia’s love. Janis later became known as the “sweetheart of the American Expeditionary Force,” thanks to her performances before WWI troops.  Ade’s musical ran at the Knickerbocker from February 1, 1909 to May 29, 1909. 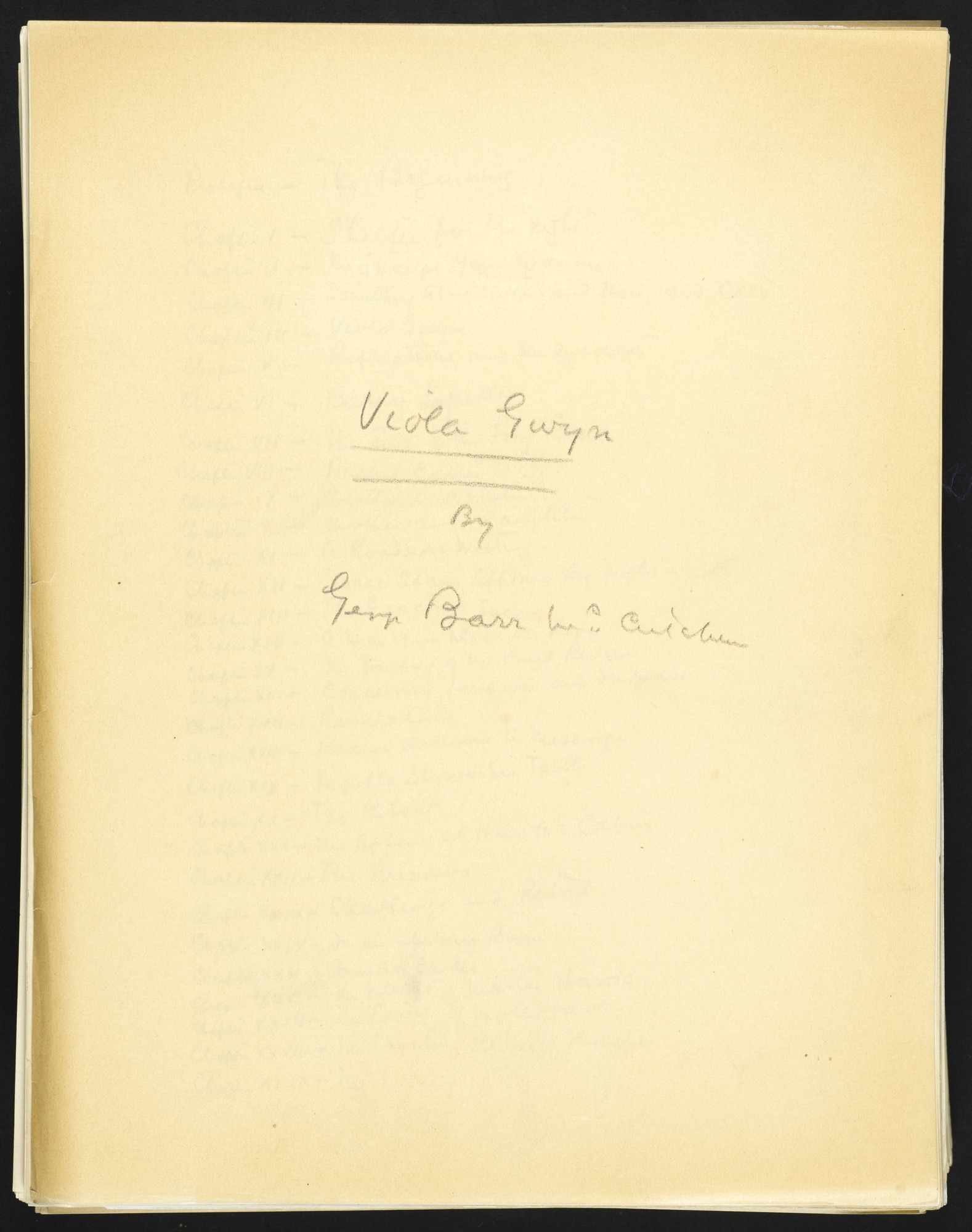 A competently narrated novel from the early days of Tippecanoe County, with a complicated, constantly evolving plot.  George McCutcheon (1866-1928), widely known for his novels set in the fictional country of “Graustark,” was an old hand at spinning yarns.   The novel’s hero, lawyer “Kenny” Gwyn, upon his arrival in Lafayette, promptly falls in love with a girl he suspects is his half-sister, except she turns out not to be, although this, for reasons not always evident to the reader, cannot be revealed until the end.  Throughout the novel, there is much talk about savage “redskins,” yet when the good citizens of Lafayette embark on a campaign to eradicate Black Hawk, they don’t come across a single Native American—McCutcheon’s sly way of (sort of) giving his readers what they like.