A provocative example of “Hoosier noir,” set in southern Indiana, where the author lives.  In a series of interlocking stories, Bill (born in 1974) creates a kind of antidote to the celebration of the local in collections such as Sherwood Anderson’s Winesburg, Ohio.  Bill’s characters are real people locked in a devastating cycle of poverty, drugs, and violence, but they are not without moments of grandeur that makes them more than victims of circumstance. Named a 2011 Best Book by GQ and The Daily Beast. 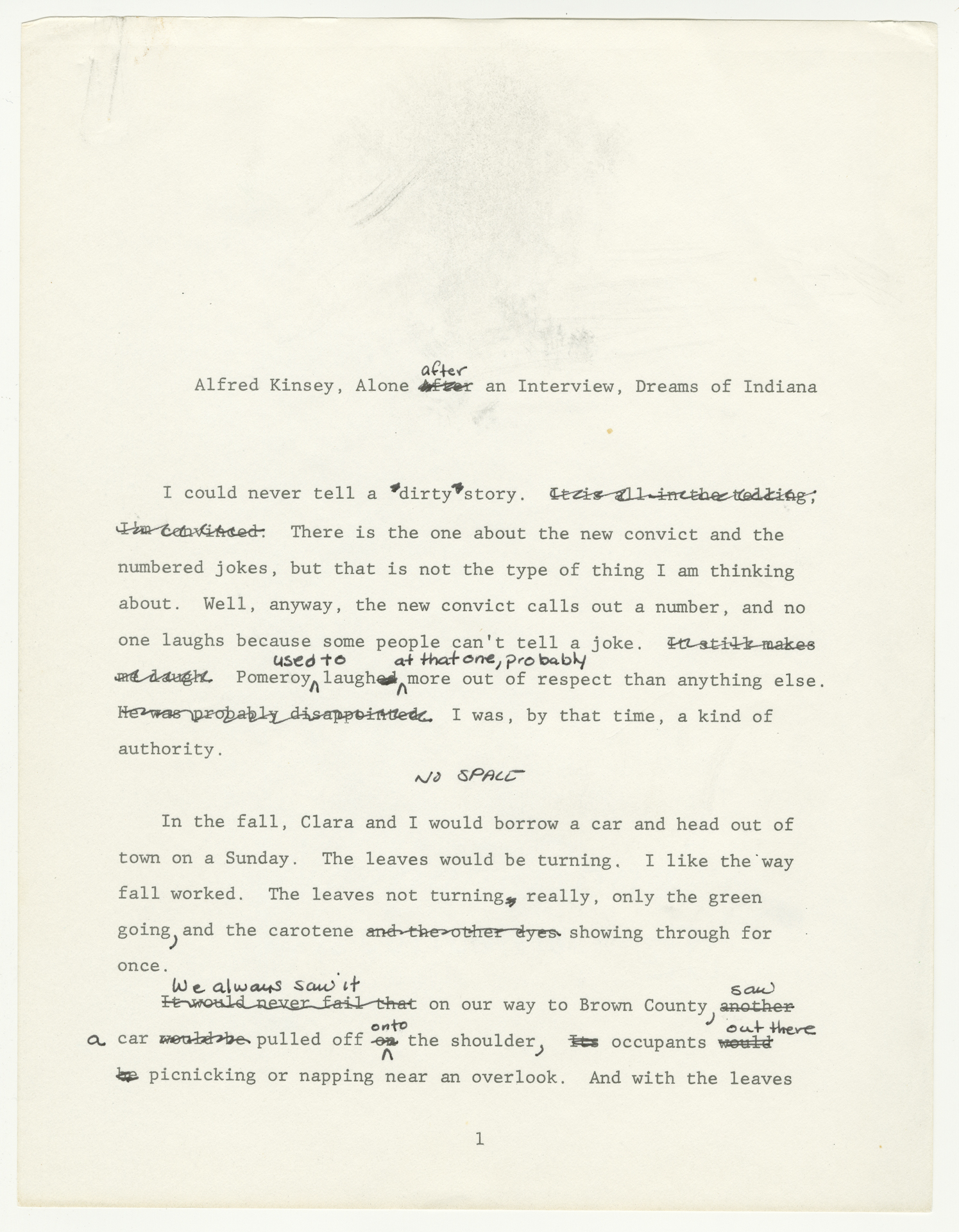 Michael Martone, Typescript, with holograph corrections, of “Alfred Kinsey, Alone After an Interview, Dreams of Indiana.”

Draft with multiple holograph corrections.  Martone’s story, first published in the Iowa Review in 1979 and later included in his collection Fort Wayne Is Seventh on Hitler’s List (1993), leads us into Kinsey’s mind but also evokes the special atmosphere in Bloomington, where studying wasps (originally Kinsey’s specialty as a biologist) and watching people are activities that easily blend into each other.  Born in 1955 in Fort Wayne, Martone now teaches creative writing at the University of Alabama but continues to revisit the Hoosier state in his work, notably in his wickedly funny Blue Guide to Indiana (2001), which Amazon advertises with the cautionary note: “This book is not actually part of the ‘Blue Guide’ series.’” 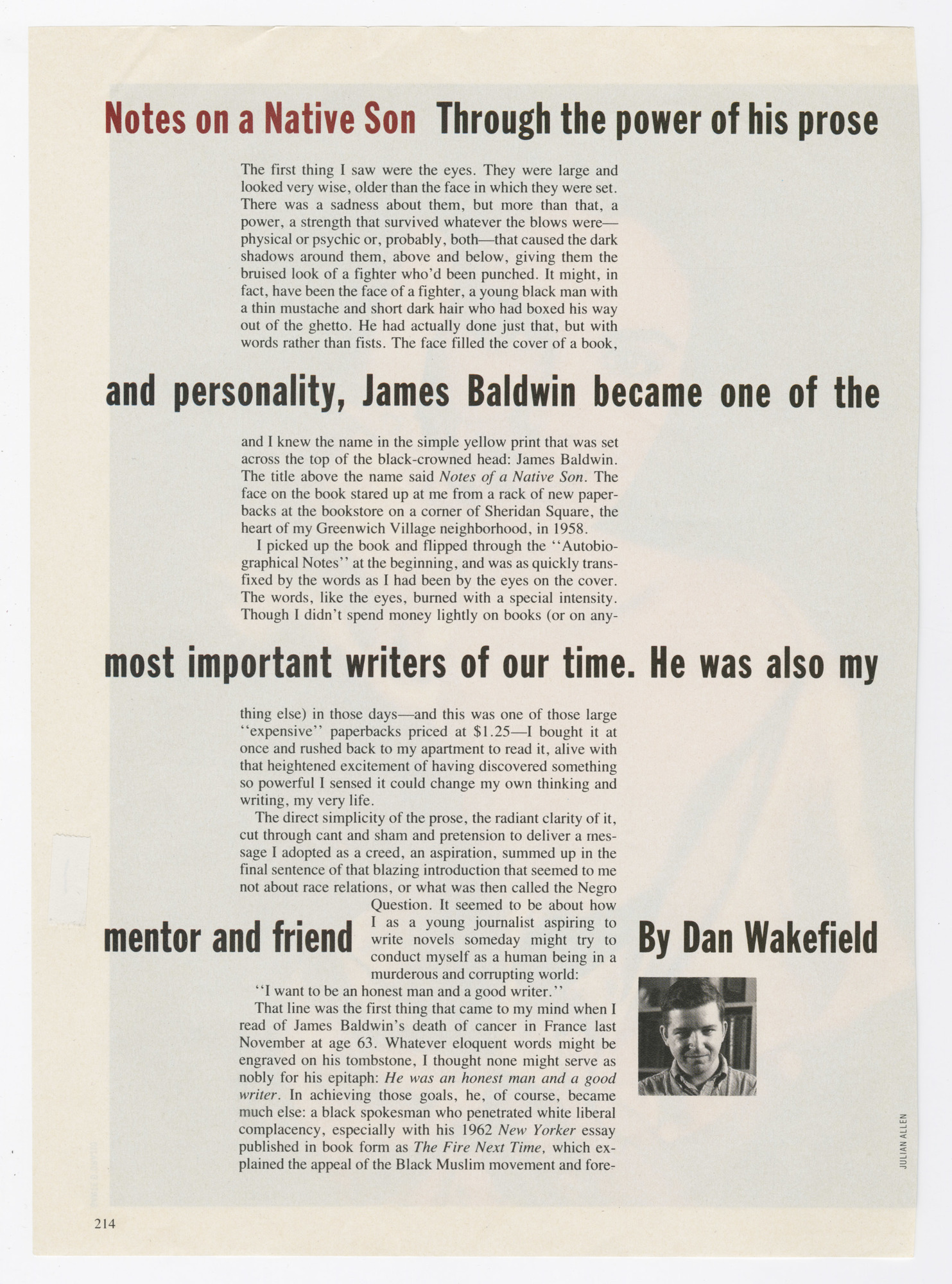 Born in 1932 in Indianapolis, Dan Wakefield has enjoyed a rich and varied writing career that has included work for television (he created the NBC series James at 15), cutting-edge reporting, as well as teaching workshops on spiritual autobiography.  His bestselling novel Going All the Way (1970) was made into a film starring Ben Affleck and Rachel Weisz.  This tribute to his mentor James Baldwin was later included in Wakefield’s New York in the Fifties (1992).  In Wakefield’s fond recollection, the “direct simplicity” of Baldwin’s prose, “the radiant clarity of it, cut through cant and shame and pretension to deliver a message,” one that Wakefield adopted as his personal creed and as a guideline for his own luminous writing. In 2011, Wakefield, who the New York Times once described as “a model of what Indiana Jones may look when he attains maturity,” returned to live in Indianapolis, a city where fellow Hoosier and friend Kurt Vonnegut had originally predicted Wakefield, thanks to his controversial reporting, would never be welcome again. 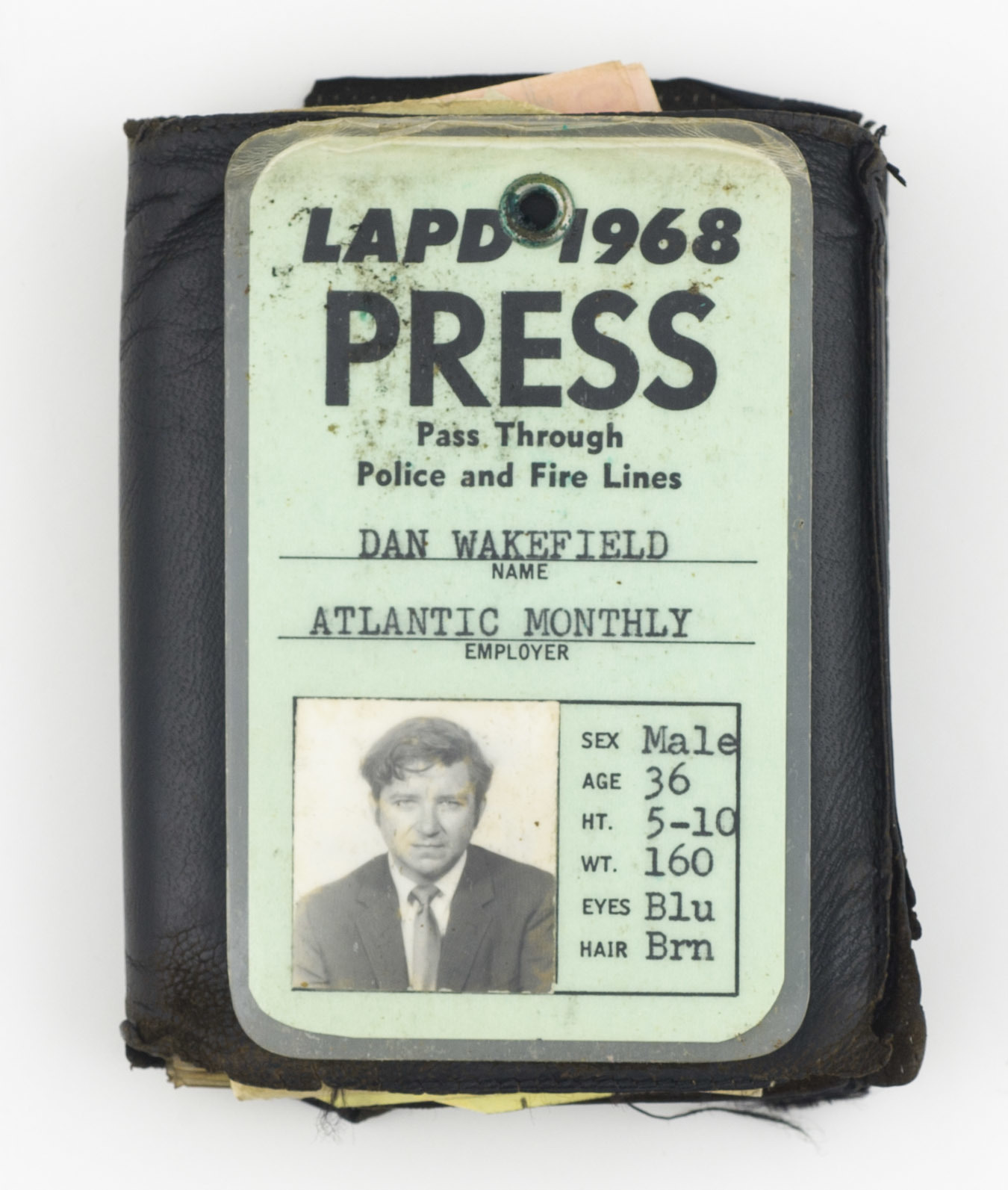 A seasoned journalist despite his young age—his first national assignment was covering the trial of the murderers of Emmet Till—Wakefield became a contributing editor to the Atlantic Monthly in 1968.  He was immediately sent around the nation to assess the impact of the Vietnam War on Americans everywhere.  The entire March issue that year was devoted to Wakefield’s reporting on the antiwar sentiment.  In October the same year, Wakefield’s observations were published in book form, Supernation at Peace and War. 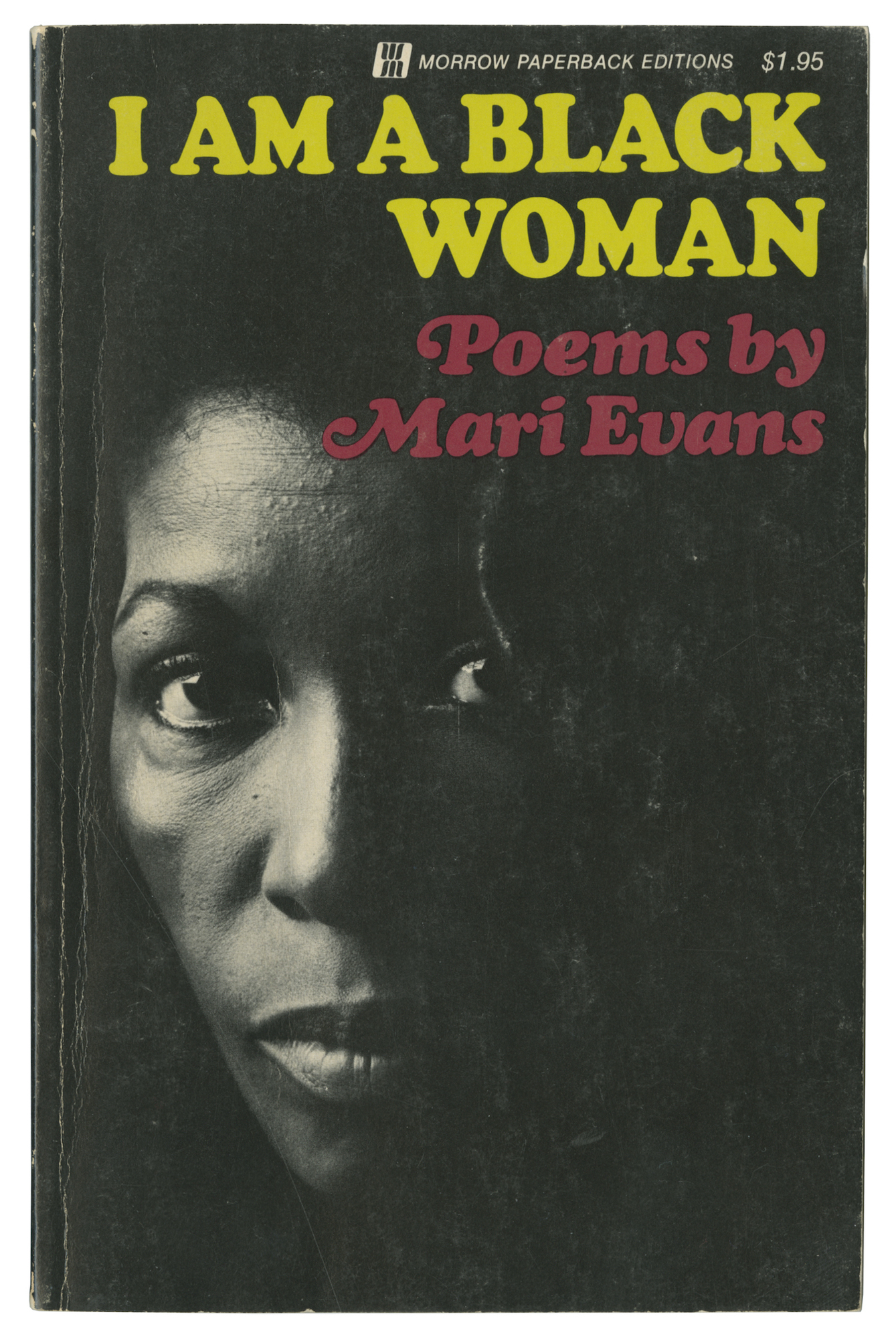 Born in Toledo in 1933, Mari Evans lives in Indianapolis, where she has raised her voice against the destruction of black communities near downtown.  Evans has taught, usually for shorter periods of time, at several American universities, including IUPUI, Indiana University Bloomington, Purdue, and Cornell University.  The editor of one of the first critical collections dedicated to black women’s writing, she has also written for children.  Her best-known work, however, is the poem “I Am a Black Woman,” a powerful reflection on how a history of repression, from the Middle Passage to the continuing violation of civil rights in our time, has made black women only stronger: “I / am a black woman / tall as a cypress / . . . .  Look / on me and be / renewed.” The inscription in this autographed copy reinforces the message of the poem: “Lena—Stay Strong.” Cover photograph by Thomas Jackson. 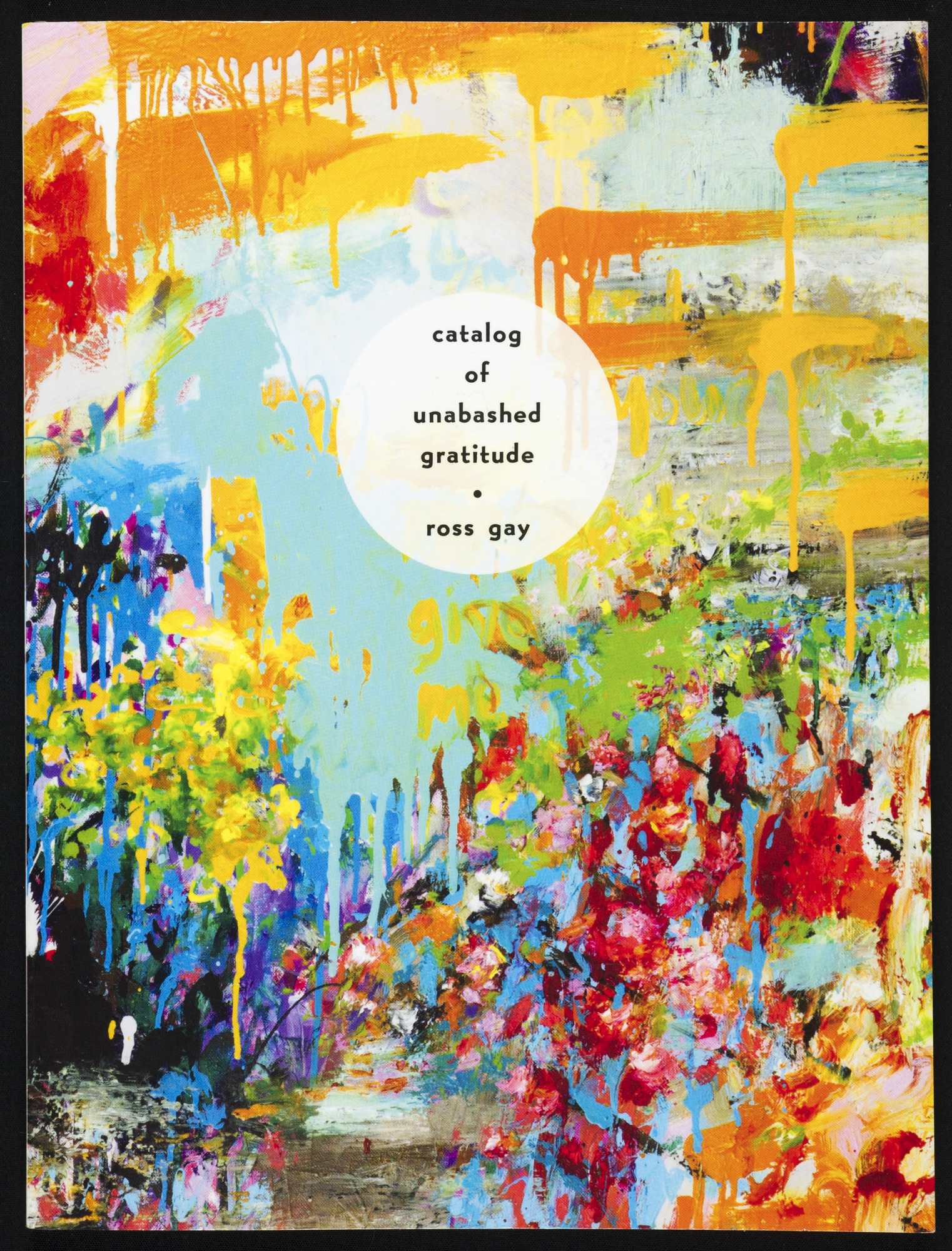 Award-winning collection by IU English Department faculty member Ross Gay.  In the title poem, a shabby-winged robin stirs the poet into releasing “the whole rusty brass band of gratitude /not quite dormant in my belly.”  The poems that result are as a delicate as they are forceful, celebrations of the poet’s “congress / with the newly yawning grass,” even in Indiana, “where I am really not from” (“Patience”; “Spoon”).

On back endpapers of Gay’s own copy of Rebecca Solnit’s The Faraway Nearby (2013). Donated by Ross Gay. It is fascinating to see how several of the key elements of the poem, later published in Catalog of Unabashed Gratitude, are already present, from the pear-tree and the bees to the dreaming boys, while the narrative of the poem has yet to emerge.