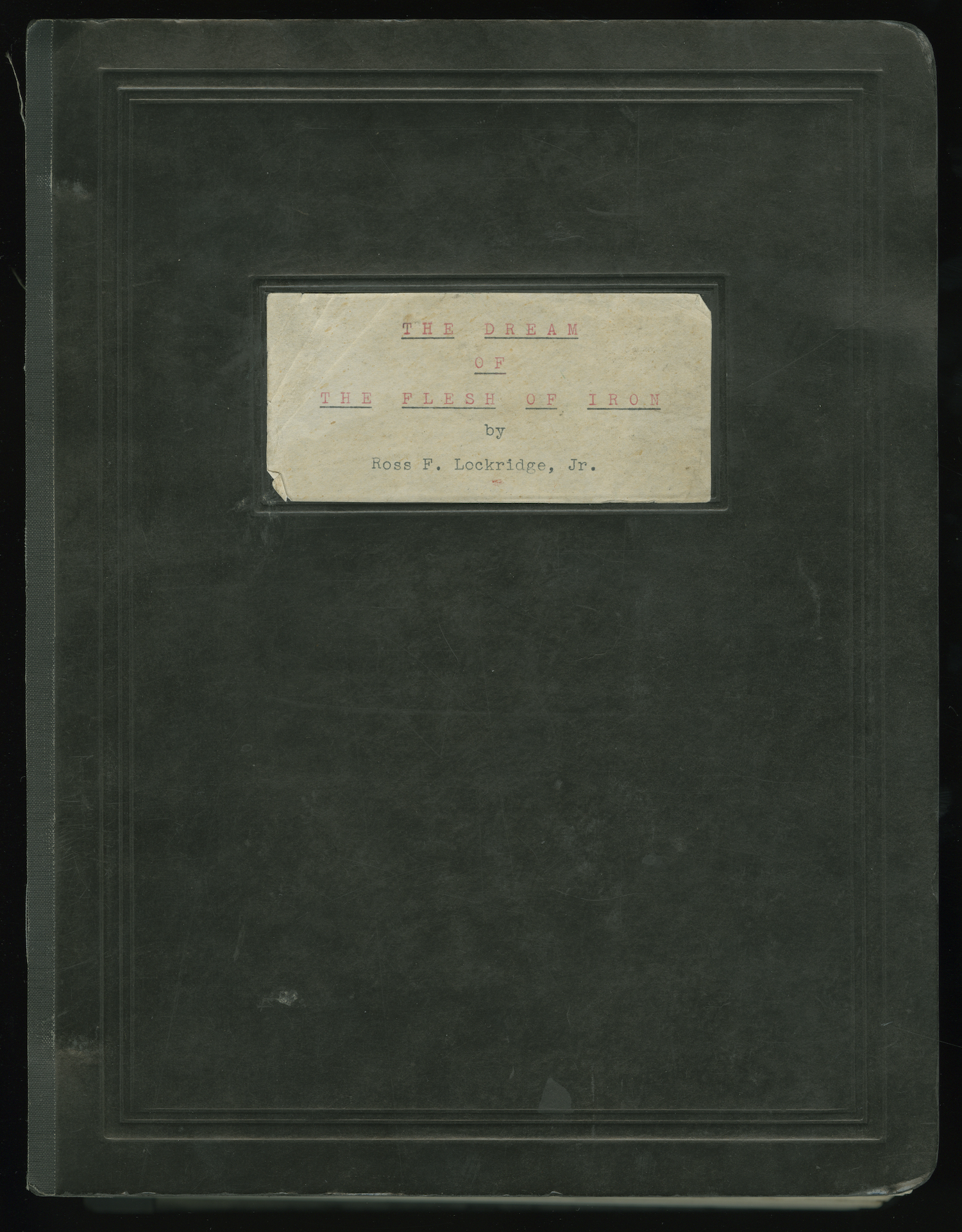 Ross Lockridge, Jr., “The Dream of the Flesh of Iron.” Typescript manuscript.

Unsurprisingly, clocking in at 399 hand-numbered pages, this poem, written by Bloomington native Ross Lockridge, Jr. during his Harvard days, proved unpublishable.  In his own description, the “Dream of Flesh and Iron” was “a narrative poem conceived on the grand scale, the story of a human soul passing in struggle through a multitude of symbolical episodes that describe and interpret the age of convulsion through which humanity is passing.”  That Dante was the grand scale he had in mind is evident from this poetic preface, titled “Emergence,” which is displayed here: “Descend with me.  This is the dream I dreamed.” 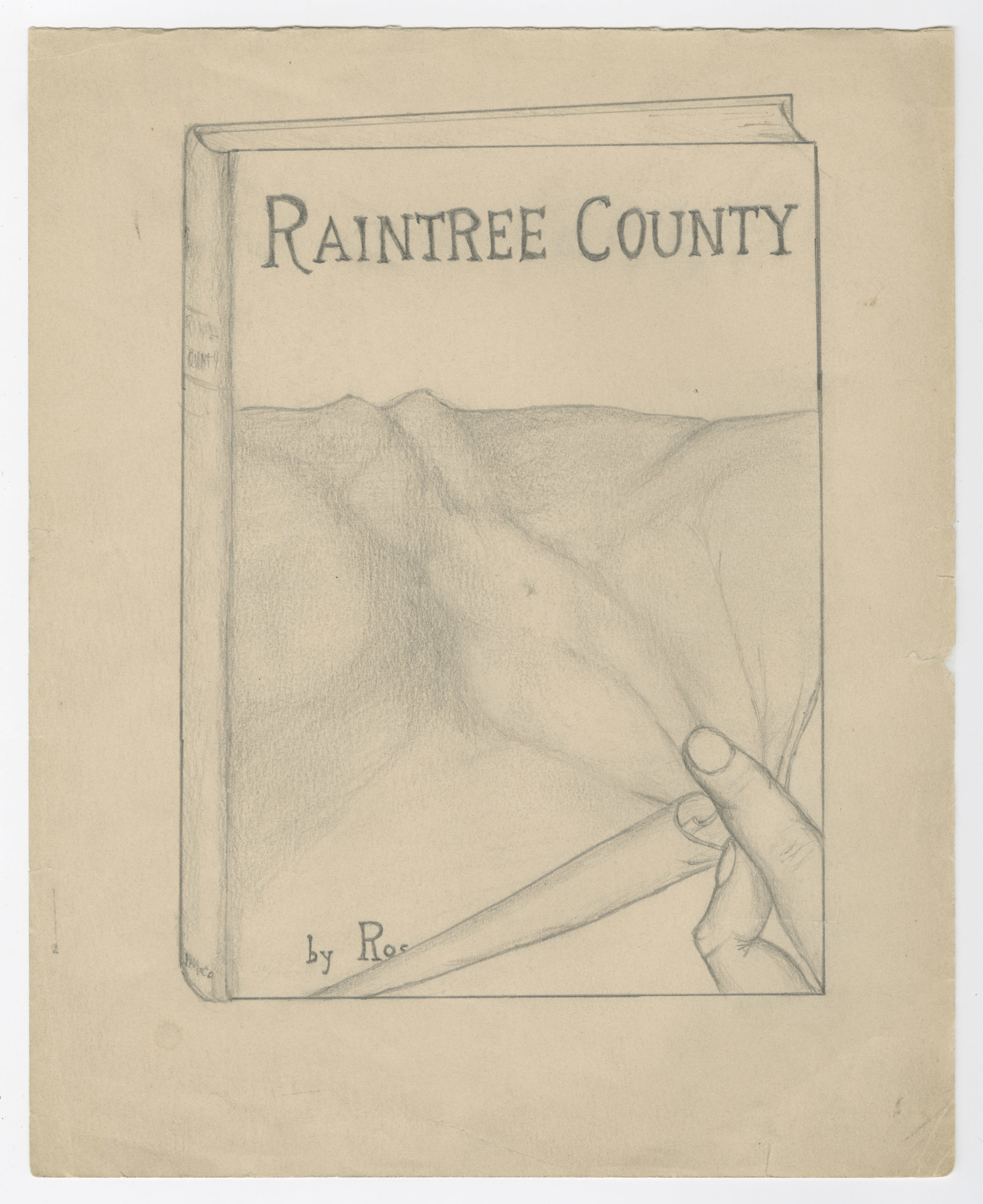 Ross Lockridge, Jr. from the manuscript for Raintree County, ca. 1948.

Hand-drawn title page and first page with alternate titles (“Summer—and the Days Are Long”; “On the Breast of the Land”).  Set on a single day, July 4, 1892, at a single location in legendary Raintree County, Lockridge’s doorstop-sized novel was published to great critical acclaim in January 1948, soon topping the Herald-Tribune’s national bestseller list.  Walt Whitman meets Thomas Wolfe meets Faulkner as the reader follows the novel’s meandering paths into the consciousness of protagonist Johnny Wickliff Shawnessy during his extensive dives into the past, from his adolescent sexual encounters to his participation in the American Civil to his concern with the “ravaging and rending the beautiful earth of America.” Lockridge’s son later remembered recognizing what his father’s design for the book’s jacket really represented only when he reached puberty: a naked woman’s body being revealed as a hand  pulls down a landscape as if it were a piece of fabric. The author’s name remains partially hidden in the original drawing, an almost prophetic detail given Lockridge’s fate.  Depressed, he died by his own hand in his garage in Bloomington on March 6, 1948, aged only thirty-four. 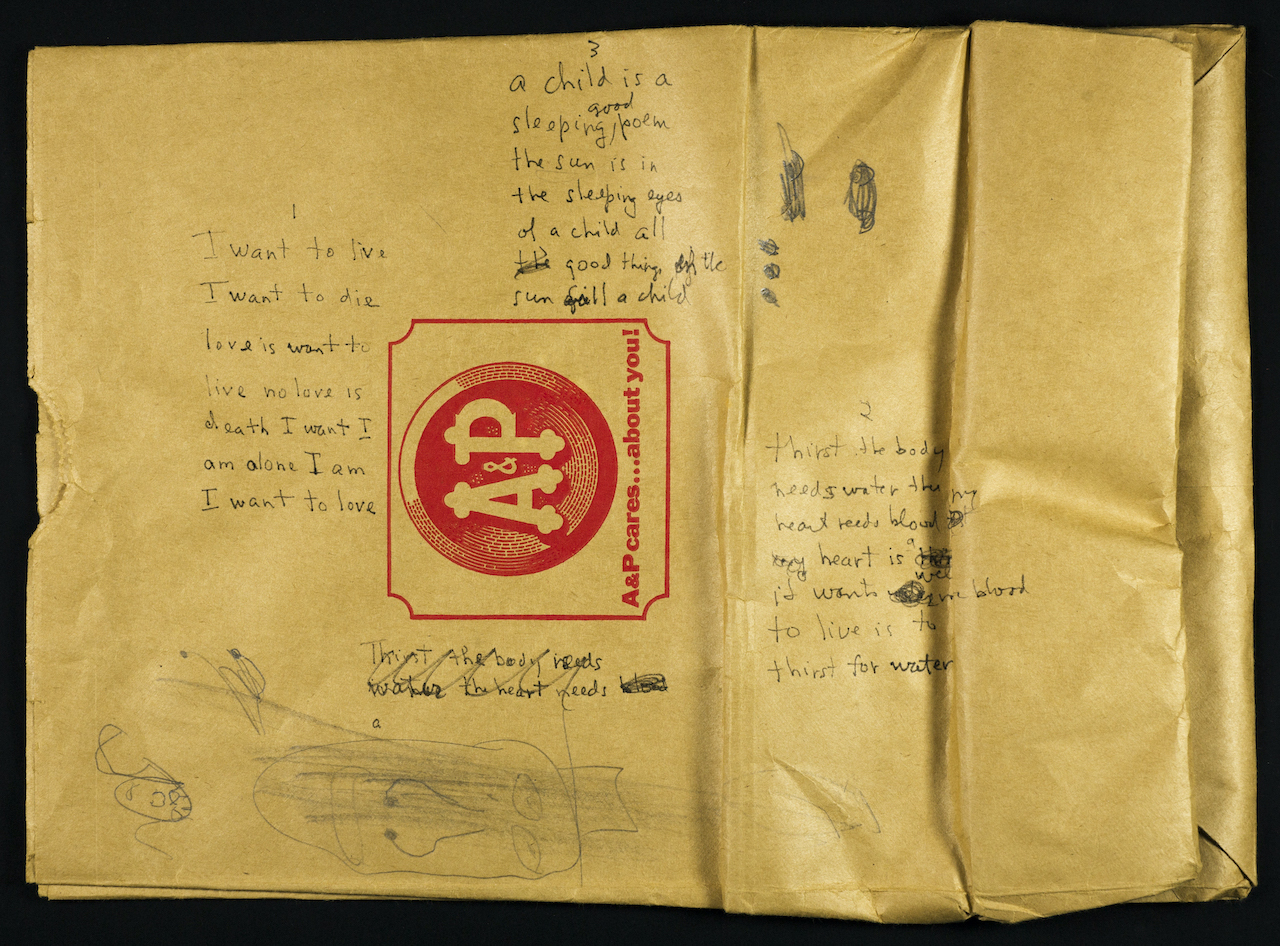 Scholar-poet and translator Willis Barnstone, born in 1927 in Lewiston, Maine, has enjoyed a varied teaching career that has taken him to Greece, Argentina, and China. He is now Distinguished Professor Emeritus of Comparative Literature and Spanish at Indiana University. Although he thinks of himself as primarily a poet, his pioneering edition of the restored New Testament as well as his translations of the Ancient Greek poets and Heraclitus have set new standards in other fields as well. Shown here is the beginning of his draft of the 50-stanza poem “Overheard,” published in Antijournal (Vancouver, British Columbia: Sono Nis Press, 1971). The poem begins: “I want to live / I want to die / love is want to / live no love is / death I want I / am alone I am / I want to love.”  According to an accompanying note by Barnstone, he began writing it on the shopping bag and continued on paper when he ran out of space. Very little revision was needed before the poem went into print.