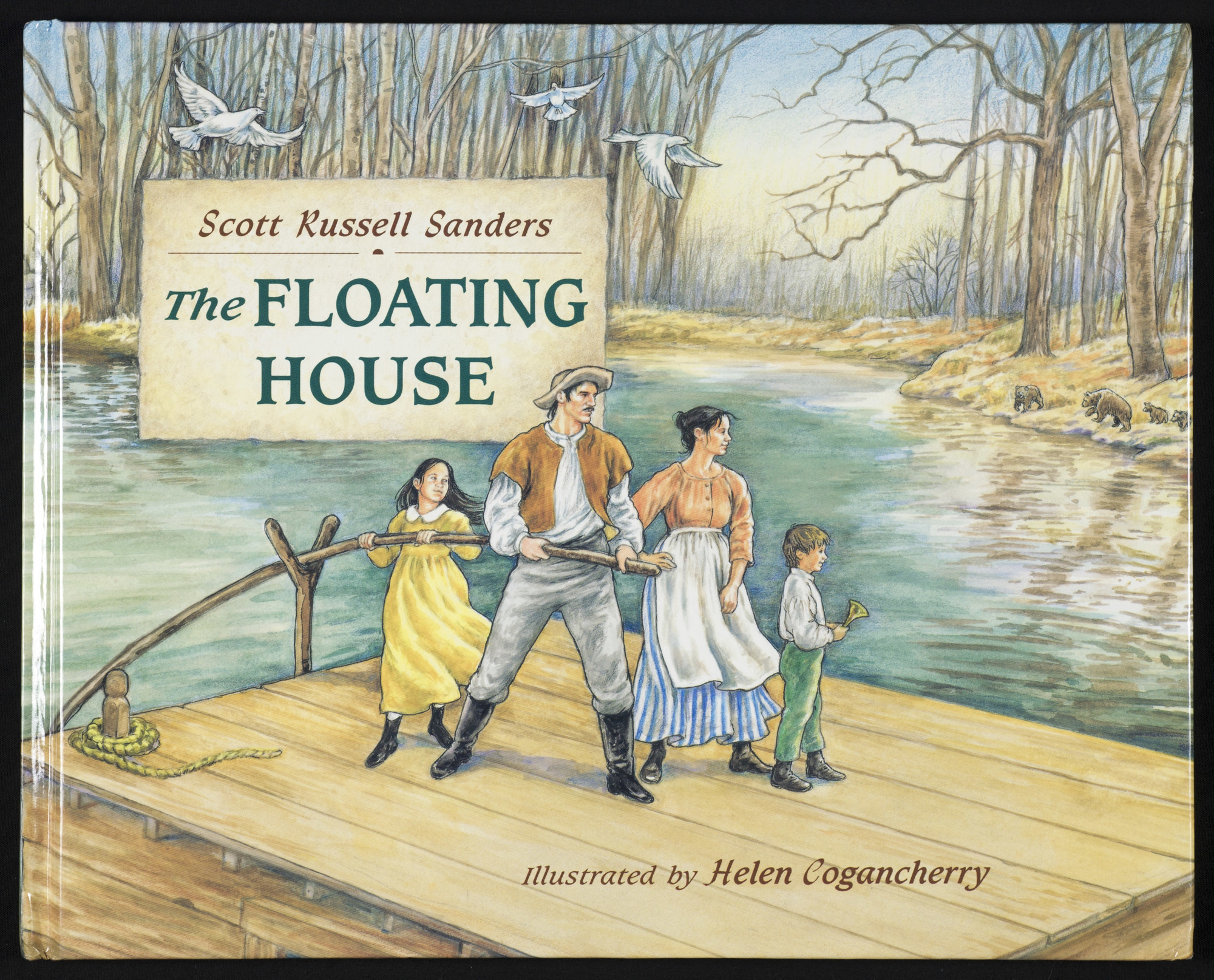 Inscribed by the author (“to Anne”).

Scott Russell Sanders was born in 1945 in Memphis, Tennessee and raised in the Ohio River Valley.  He has made his home in Bloomington since 1971, when he accepted a position at Indiana University, from which he retired, as Distinguished Professor of English, in 2010.  While he is mostly known as a writer of creative non-fiction and an outspoken advocate of environmental awareness, Sanders has contributed prolifically to all genres. He is also an award-winning author for young audiences. In The Floating House Sanders’s various interests meet as he takes his young readers back to 1815, when the McClure family traveled down the Ohio River towards Jeffersonville, Indiana, in a flatboat containing all their possessions, including their farm animals. After their arrival, they will dismantle their boat and use the wood to build a new house—an early example of sustainable living. 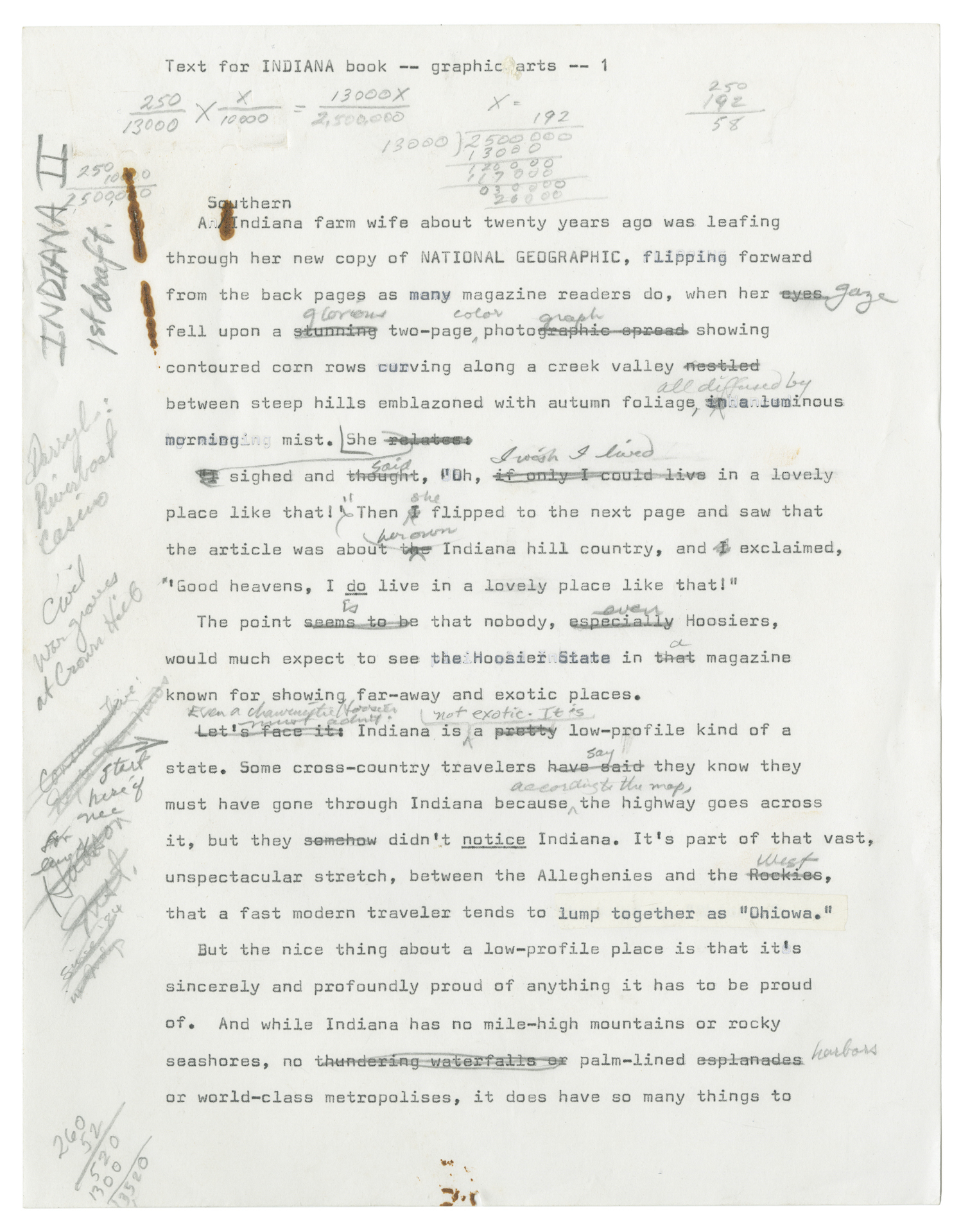 First page of the first draft of Indiana II, with photographs by Darryl Jones, published in 1996. The beginning is vintage Thom, as he takes us right into the book with a story of a southern Indiana housewife paging through an issue of National Geographic and longing for the place she sees depicted there (“contoured corn rows curving along a creek valley”), only to find out that this is where she already is. Thom’s revisions, by making, for example, the phrases “Oh, I do wish I lived…” and “Good heavens, I do live...” echo each other, render this page an even more effective opener of the book as a whole. A supreme craftsman, Thom, born in 1933 in Gosport, Indiana, is widely known for his finely imagined and deeply researched historical novels such as Long Knife (1979); From Sea to Shining Sea (1981); Panther in the Sky (1989); Warrior Woman, co-authored with his wife Dark Rain (2007); and, most recently, Fire in the Water (2015).  He and Dark Rain live in a log cabin just outside of Bloomington. 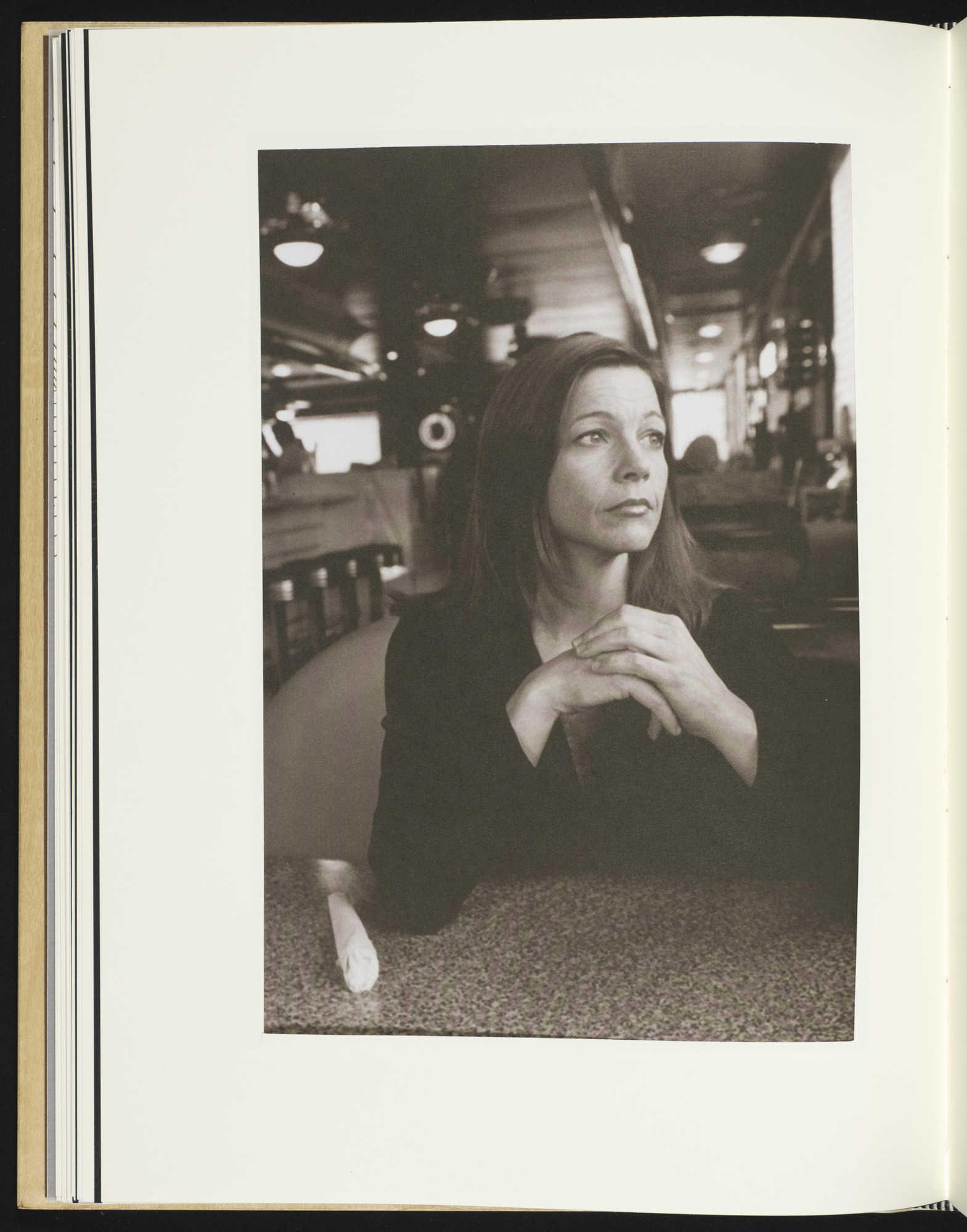 Artist’s book, bound in ebony and maple wooden boards and printed goatskin vellum.  A collection of oral history interviews featuring musicians active in the Bloomington community.  Shown here is singer-songwriter Carrie Newcomer: “A community like Bloomington is the best of the Midwest for me.” Photograph by Señor Mcguire. 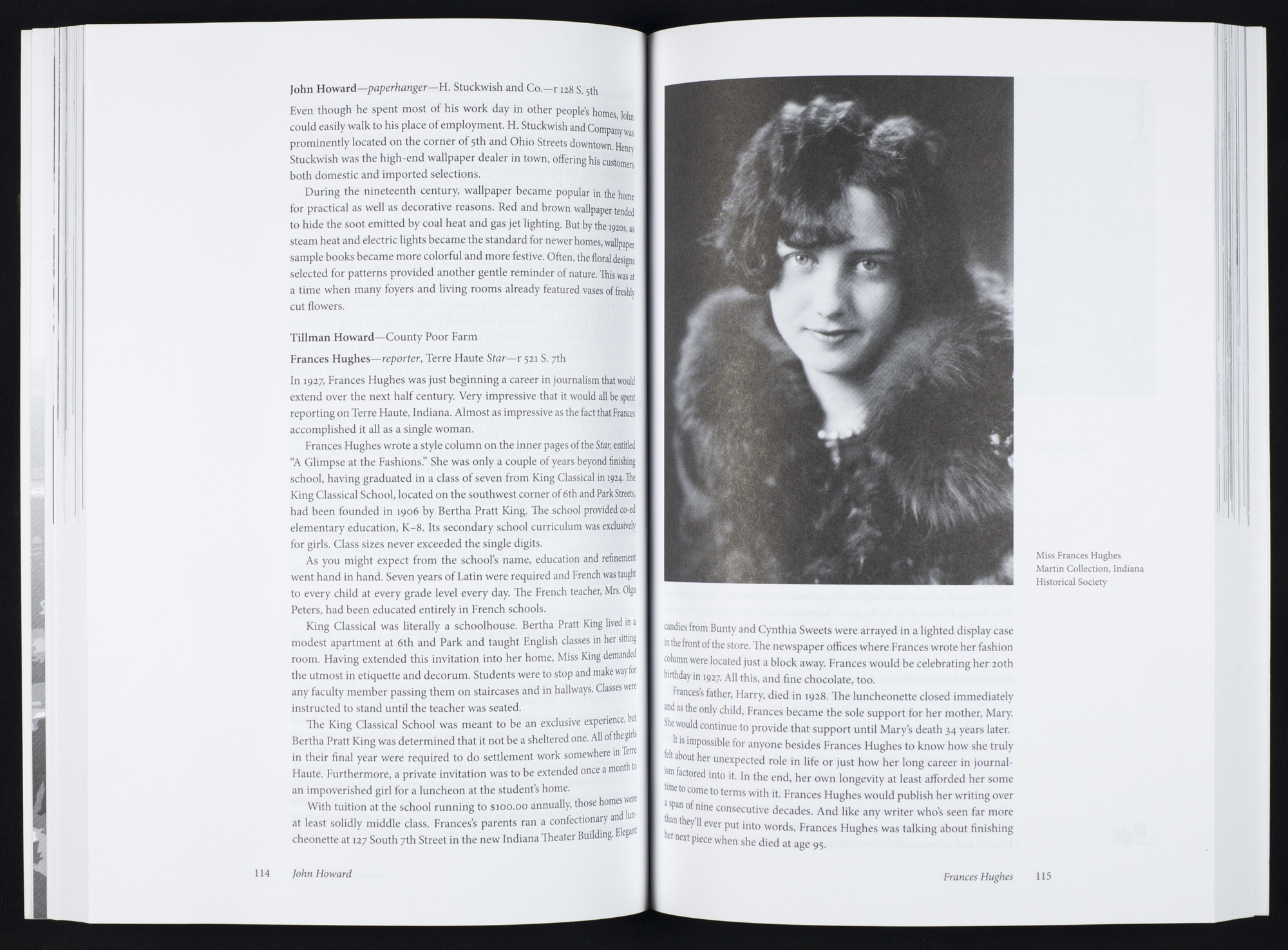 Autographed by the author (“Enjoy the journeys!”).  Originally from upstate New York, Roznowski has long adopted Bloomington and the state of Indiana as his home.  A prolific singer-songwriter, Roznowski’s is the host of Hometown, a radio program devoted to life in the Midwest during the 1920s, broadcast by NPR-affiliate WFIU.  An American Hometown is the direct result of Roznowski’s work for the radio.  Using an old street directory of Terre Haute as his source, Roznowski strove to give, in the words of poet Robert Lowell, “each person … a living name.” The example shown here is Frances Hughes, a reporter for the Terre Haute Star and a resident of 521 South 7th Street.  As the result of Roznowski’s research and his extraordinary gift for empathy, people long dead come alive again, even those like George Zwerner, manager of a branch of the Wabash market and the last person listed in the book, who due to a “certain private suffering” stopped talking to other people and left no memories. 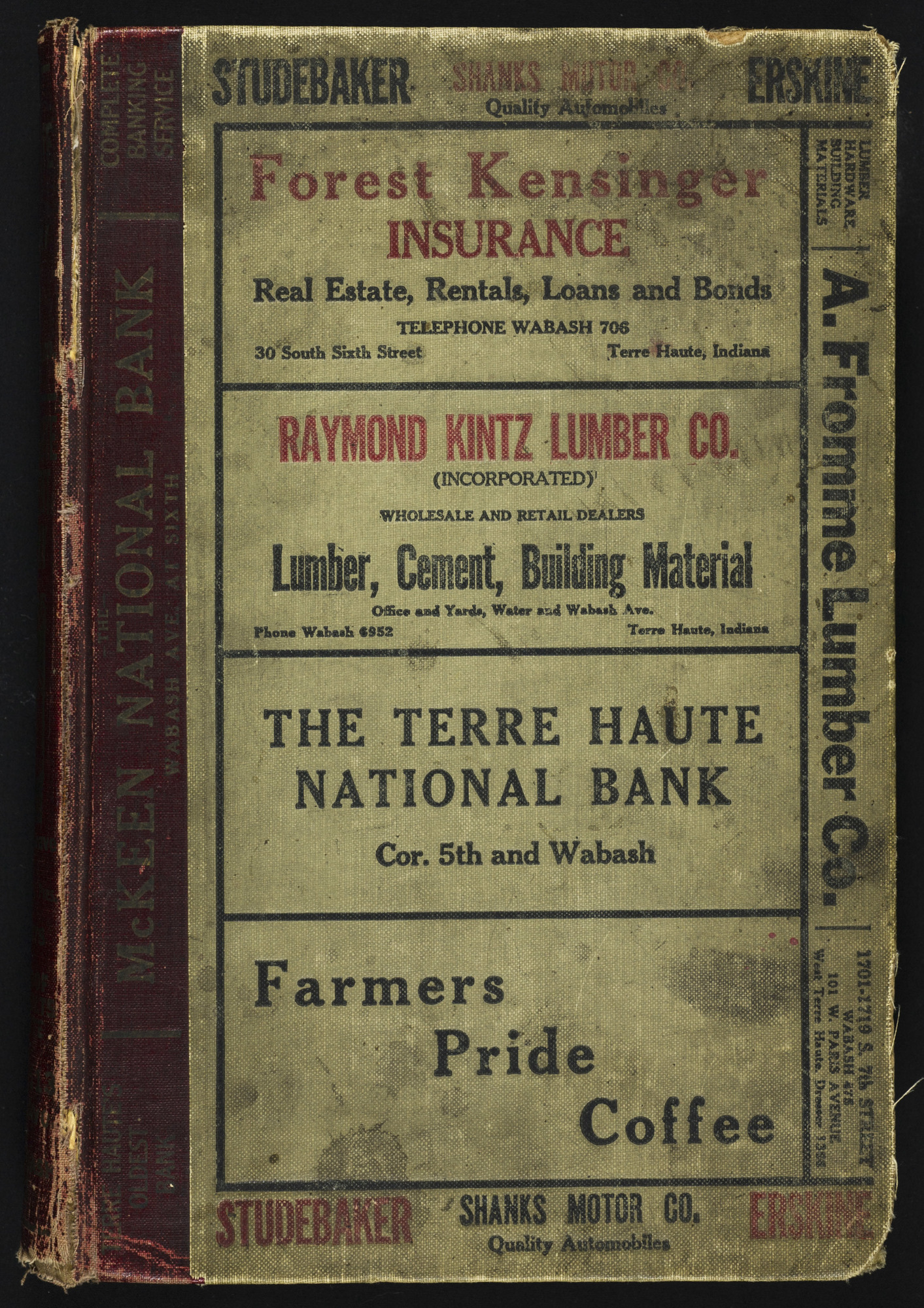