A survey of ten genres cannot encompass the entirety of Mexico’s musical culture, but certainly gives a sense of the variety of Mexican music. Read on to learn more!

Banda is a regional style of band music from Mexico’s state of Sinaloa, which usually includes clarinets, trumpets, valve trombones, alto horns, tuba, and a drum set in its instrumental line up, as well as one or two vocalists. Originating from the military bands and brass bands from European colonists, it was a favorite primarily among the rural and lower-class urban populations. It was played at cantinas and outdoor events, where it was popular for its danceability. A recent branch of banda music is technobanda, which adds saxophones, electric bass, and keyboard synthesizers while eliminating clarinets, tubas, and tambora (a local double-headed drum with attached cymbals). 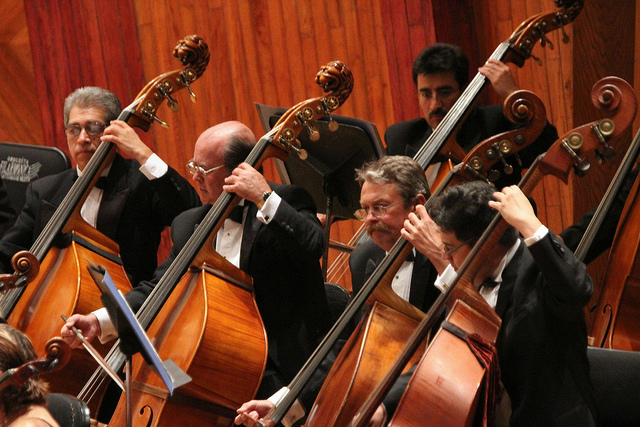 The double bass secont of the Orquesta Filarmónica de la Ciudad de México, under the direction of Iván López Reynoso.

Classical music in Mexico is rooted in the colonial period, when the Roman Catholic Church controlled much of the musical practice. In the 19th century, piano music, opera, and other types of music were heavily influenced by European traditions. A national style began to take shape after the Revolution of 1910-1920, with many composers integrating popular, indigenous, and folk music into their orchestral writing. This trend was continued throughout the twentieth century by composers like Carlos Chávez, Mario Lavista, Gabriela Ortiz, and Arturo Márquez. 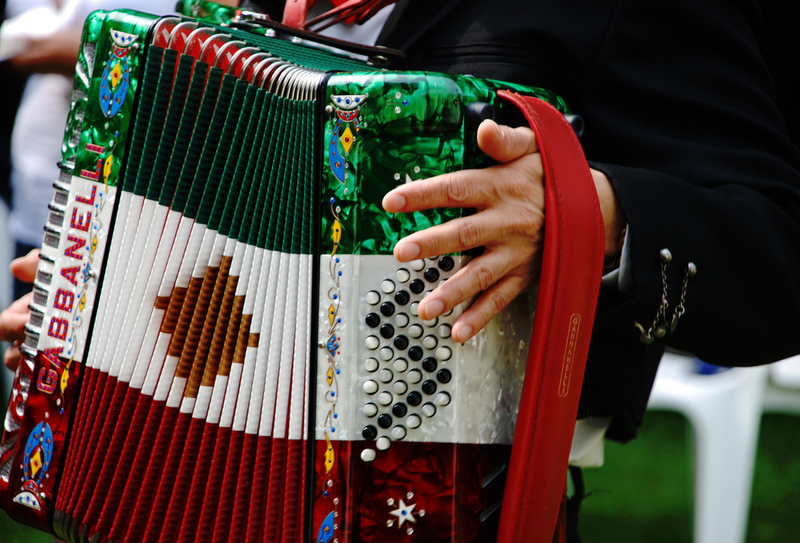 The word conjunto is a generic term for a musical ensemble in the Spanish speaking world. In Mexico, however, it can refer to the Tex-Mex style of music that developed along the Texas-Mexico border known as conjunto tejano, as well as the norteño from northern Mexico. A prominent feature of the music is the use of the accordion, popularized in 1920’s and 30’s by the “father” of conjunto music, Narciso Martínez.

The corrido is a narrative folk ballad, offering commentary on anything from political events and natural disasters, to horse racing, immigration, and drug trafficking. Usually a cappella or with guitar accompaniment, it begins with the narrator saying they will tell a story, and ends with a farewell from narrator. Narcocorrido is a subgenre that focuses on drug trafficking and cartels in their lyrics. Another subgenre is the border corrido, which emerged along the Texas-Mexico border. By telling these stories, the corrido functions as a method of transmission for Mexico’s folk history.

Mexican cumbia originated in Colombia, but spread to Mexico in the twentieth century, where the music occupied its own distinctive niche. Widely popular in Mexico by the late 1980’s, it incorporated the basic rhythmic patterns found in Colombian costeño, as well as influences from norteño accordion riffs, polka music, electronic instruments, and ranchero music. Mexican cumbia, especially from performers in northern regions, has a significant influence on the genre’s presence in the United States. 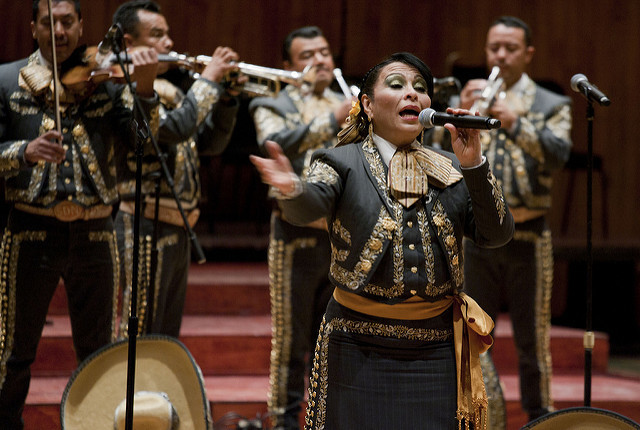 Of all the music associated with Mexico, mariachi is the most nationally prominent. It is distinguished by the instrumentation and arrangement of the variety of genres it encompasses. It includes the vihuela and the guitarrón, which together create the armonía, as well as guitars, violins, and at least one trumpet, played by performers dressed in matching outfits. Like the traditional mariachi, modern mariachi is performed standing, with a conductor at the front of the group, and the group plays music representative of various Mexican regions.

Also known as the canción ranchera, rancheras is a genre of popular music in Mexico. Developing as a modern genre in the post-1910 revolution period, when many rural Mexicans moved to the cities, rancheras derived from folk and country songs. The height of this genre’s popularity was in the 1940’s, when singer-actors like Pedro Infante, Jorge Negrete, and José Alfredo Jiménez brought rancheras to the silver screen with depictions of cowboys and ranchers. 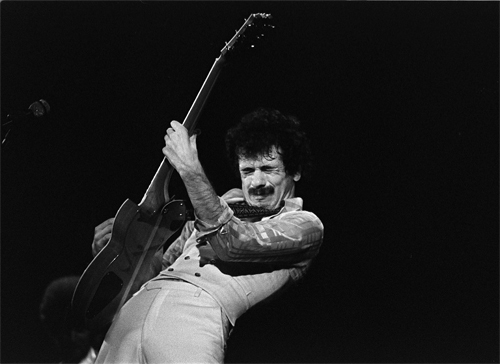 Rock en Español encompasses Spanish rock in wide variety of styles, most commonly featuring the electric guitar. In Mexico, the earliest recordings appeared in the 1950’s with Gloria Ríos. However, rock en Español rose to prominence several decades later, with the help of musicians like Carlos Santana, César Costa, and Angélica María. In 1971, a version of Woodstock called Avándaro took place in Mexico.

Mexican sones are a type of secular folk music, mostly performed in a compound meter with a good dancing rhythm. Drawn from indigenous, African, and Spanish musics, son is a string-heavy genre typically played by groups of 3 to 12 instrumentalists. Added to this is the zapateado, a style of dance that uses foot-stamping patterns to create a percussive effect. Regional styles like son huasteco, son jalisciense, and son jarocho also have distinctive instrumentation, language, repertoire, and singing styles.

One of the most influential Latin artists of the late 20th century, Selena was known as the Queen of Tejano music.

Tejano, or “Tex-Mex,” can be thought of as a broad category of popular music that includes both conjunto tejano and orquesta tejana. Conjunto tejano, like its counterpart norteño, has rural roots and features the button accordion as well as the bajo sexto (a type of bass guitar). However, where norteño is from northern Mexico, tejano music was developed along the Mexico-Texas border and reflects a much greater American influence, especially after 1950. One of the best-known singers of tejano is Selena.

Want to learn more? Check out these resources:

León, Javier F., and Helena Simonett, eds. A Latin American Music Reader: Views From the South. Urbana: University of Illinois Press, published in collaboration with the Society for Ethnomusicology, 2016.