As the artists installed their work in the week leading up to the exhibit opening, we realized that installing the pieces was an art form in itself, requiring precision and an eye for fitting the new pieces into the historic space of the house.

CARISSA CARMAN – a time when we once were 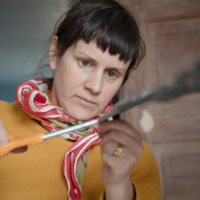 Carman is deeply invested in simple and hand-crafted processes of portable construction that playfully combine colors, textures and pattern. In a time when we once were, she re-considers the utility and beauty of textiles in conjunction with the often-overlooked yet pervasive life of children in the Wylie House. The two Wylie families had a total of twenty children. Carman’s installation, located in the Sick Room, includes a cyanotype printed sculptural quilt top suspended over two beds with accompanying soundscape. This piece brings to light the presence and imaginative actions of the underrepresented children, enabling a passage of exchange to honor their spirits being re-awakened. 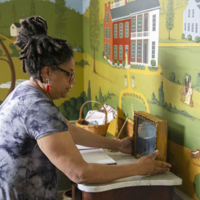 Elizabeth “Lizzie” Breckenridge served the Wylie family for 54 years, and yet there is very little to mark her presence. For this exhibition, called Seeing Lizzie, Quiñones has created a series of artifacts including dolls and altered household items and placed them throughout the house (in the Hall, Master Bedroom, Attic, and elsewhere) to highlight how invaluable Lizzie’s labor, skill, and care were to the everyday functioning of the Wylie household. By juxtaposing and rearranging Wylie House items with fabricated ones, this exhibit raises questions about the relationships that existed, with Lizzie as both the center and focus.

KATRINA MITTEN – Kill the Indian in Him, and Save the Man; I Will Never Forget; Myaamiaki Eemamwiciki; Missing and Murdered 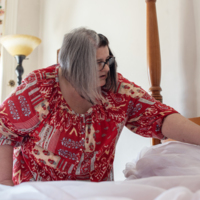 Mitten’s four installations in the Guest Room explore the forces that were set in motion against the area’s indigenous population as the Wylie House was being built.  Kill the Indian in Him, and Save the Man portrays Indiana boarding schools’ attempts to eliminate their students’ traditional clothing, hair, names, and language.  I Will Never Forget uses the ledger count from an Evansville, IN, steamship taking people to “Indian Territory.”  Myaamiaki Eemamwiciki (Miami Awakening) honors those who maintained their traditions in private during the assimilation that was necessary for survival.  Missing and Murdered fills the cupboard with clothing that is red, the color the Creator sees, to represent those who have been affected by the continuing epidemic of mistreatment of indigenous women. 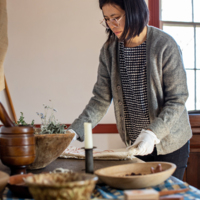 COALESCENCE illustrates the synergy that is created when cultures coalesce at a place where a meaningful exchange of dialogue creates a new legacy of form. Inspired by Tien’s experience as a Vietnamese-American, this particular installment of The Im-ple-ment Archive (an evolving collaborative exploration of utensils and other pieces of equipment by Tien and Ellen Kleckner) utilizes a visual language of familiar materials and compositions in the guise of utilitarian objects to encourage an expansion of one’s worldview. Taking cues from existing artifacts in the museum's Kitchen, Tien drew from her memories of home to create im-ple-ments that parallel her contemporary Vietnamese-American narrative with the history represented by the Wylie House Museum. 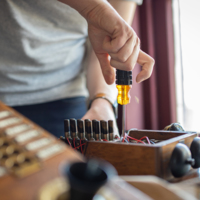 Bishie is a sound installation in the Girls' Room in which members of the contemporary queer community bring to life the teenage correspondence between future poet laureate Elizabeth Bishop and Louise Bradley, great-granddaughter of Rebecca and Theophilus Wylie. Bishop and Bradley met as teenagers at Camp Chequesset on Cape Cod in 1925 and continued to exchange letters for many years afterwards. These letters represent a slice of Bishop’s coming-of-age experience during a time when freedom of queer expression was not permitted, and her creative prose shows evidence of the restrained and coded love language indicative of the experience of LGBTQ+ identifying individuals of the time. 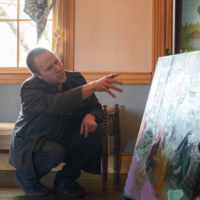 Foxton’s painting of Elizabeth Bishop and Louise Bradley is a symbolic composite not only of their relationship, but also of historical analysis and imagination. Their correspondence adds depth to LGBTQ+ history by portraying their embodiment of the universal longing to enjoy a relationship, platonic or otherwise, that endures for decades. The painting’s setting is based on the Dining Room where the painting now hangs, portraying the museum not merely as a space for historical reenactment, but as a vessel for Bishop and Bradley's relationship, which lives on through their epistolary archive. 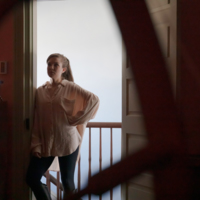 Maggie Wylie Mellette, daughter of Theophilus and Rebecca Wylie, dreamed of studying art in New York or Philadelphia before the obligations of 19th-century marriage and motherhood diverted her path. Where the Shadow Falls is a stop motion-animation focusing on her forgotten creative practice, as well as her identity as both woman and artist. Projected on the wall above the archival collection of Wylie family silhouette portraits in the Women's Workroom, this installation creates a direct dialogue between moving shadows created today and the recorded shadows of the past. 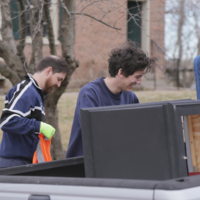 Located on the Front Lawn, Monumental Void is statue-less plinth that represents historical collections’ inability to collect marginalized and forgotten stories. The monument is painted with a deep black which both absorbs and reflects light, alternately alluding to a void or a gateway, inviting us to embrace new frameworks for confronting shame, loss, and trauma within our public spaces and historical archives.  Inspired by the works of Cornelius Pering, Pastoral Landscapes merges Monroe County’s historical 19th-century pastoral landscape with its contemporary built environment. Located in the Boys’ Room, the watercolors reflect on the tension between architecture, colonialism, displacement, and identity within our shared historical and physical landscapes.

Images courtesy of the IU Office of the Provost (Haley Semian, Claire Soisson, and Kat Spence). Click on image for individual credit.