Artists in the Museum: Call and Response

Eight professional Indiana artists created new pieces for “Call and Response: Creative Interpretations of Wylie House,” an artistic extension of the Wylie House Museum’s commitment to share the lesser-known histories of people associated with the home. Sponsored by the Arts & Humanities Council at Indiana University, “Call and Response” is part of Indiana Remixed, the Council's program celebrating the arts and ideas that shape Indiana today. 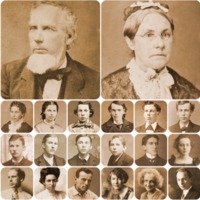 The family of Andrew Wylie’s younger cousin, Theophilus, occupied the Wylie House from 1859 until 1913, and most of the museum’s archival collections contain materials that he and his descendants created or collected. In 1912, the family gathered at the Wylie House for one final visit to celebrate the 100th birthday of Theophilus’ wife, Rebecca. Click on the photographs in this exhibit to learn more about Theophilus and Rebecca’s family members and their connections to the Wylie House.