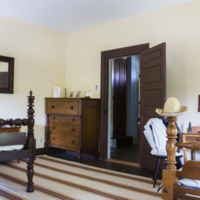 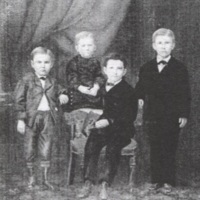 Scan of a painting by Maggie of her four sons 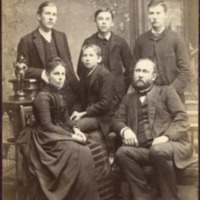 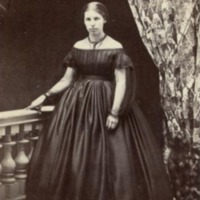 For the exhibit, the Boys’ Room serves as the stage for the story of Maggie Wylie Mellette, the mother of four boys, Wylie, Charlie, Anton, and Dick. The life of the Maggie Wylie Mellette exemplified the difficulties of mothering and maintaining the idealized vision of maternity. Her struggles with chronic illness and her eventual move out west impacted her ability to mother and raise her boys. Maggie’s health problems were attributed to a severe case for scarlet fever which she suffered as a child. Further exacerbating her condition, the vast and laborious expectations of mothering took a toll on her health, eventually motivating her husband Arthur to seek a “better climate” for his sickly wife. 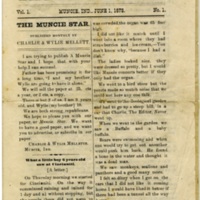 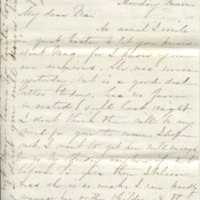 The Wylie family letters, throughout the course of the post-war nineteenth-century, revealed constant illness plaguing Maggie’s maternity and personal pleasures. In 1870, Maggie and her family, then consisting of her husband Arthur and two eldest sons, Wylie and Charlie, resided in Muncie, Indiana, where Arthur had established a law practice and ran the local newspaper The Muncie Times. In September of this year, Louisa came to stay with her sister, whose failing health was just beginning to affect and be affected by her mothering responsibilities. Louisa writes to her mother:

“As usual I write in great haste to let you know about Mag for I know you are anxious. She was worse yesterday, but is a good deal better today, has no fever and rested well last night . . . It is just from over work I think. It has brought on a fever and great prostration but I know that she will get well when we get her home and that is one reason I want to go as soon as possible . . . The reasons for her being worse yesterday are various. First she and Calvin too would insist, in spite of all I could say, in keeping Wylie during the night. He was not well and tossed about, kicked off covers etc and she did not sleep a bit.” 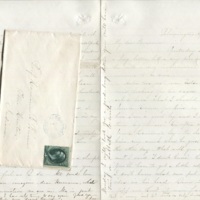 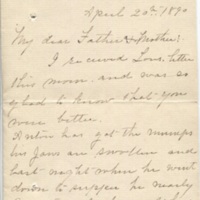 On April 20, 1890, Maggie wrote to her parents about first feeling "dreadfully about going so far away”.

Maggie’s ability to return to the care of mother, often leaving her motherly duties or temporarily assigning them to her female relatives, remained a possibility only during her years in nearby Muncie, from 1866 to 1878. During this time, on several occasions, Maggie did call upon her mother or sister to rush to her aid, taking care of her and what would have been considered her motherly obligations. Again, on April 10, 1875, Louisa wrote to her husband Herman about Maggie’s failing health, saying:

“I had just written so far, dearest Hermann, when Ma received a dispatch from Muncie saying, “Come on first train. Maggie has dysentery and we fear fever.” How I feel, how we all feel you may know. I stopped writing immediately in order to help Ma get ready and now I have only time to finish this letter very hurriedly.”

In 1879, the Mellette family moved outside to the proximity of familial care and to the Dakota Territory. Arthur felt the drier climate of the west would allow for his wife to recuperate, and his appointment as Registrar of the Public Land Office in Springfield only further motivated the journey to what would later become South Dakota. Originally feeling “dreadfully about going so far away”, Maggie followed her husband, leaving the comforts and safety of her female caretakers Indiana. The family arrived in Dakota, following the three-day journey by train. It was thirty-five degrees below zero when they arrived. 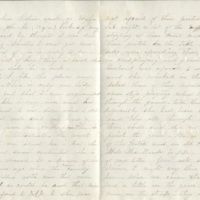 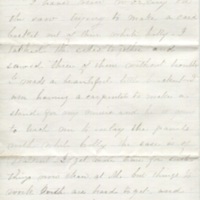 ". . . the weather has been unpleasant and I have tried to keep the boys in and that almost drove me wild." - Maggie Wylie Mellette, March 23, 1879

During their first year, the family settled in small home in Springfield, Dakota Territory. Maggie’s letters following the move reflect the difficulties of maternal life, isolated on the new frontier, “a dreadful place to raise boys”. On February 5th, 1879, she wrote her sister, Louisa:

“I have not had time to feel lonesome since I came, as I can get no girl and with a family of 7 I am kept busy. . .There is only one lady that I feel that I am acquainted with. She is very nice and has been kind to us. Days when I did not feel well sent me bread and cake to save me cooking.”

“I find so many things I want to do that sometimes I am very much discouraged when I think of only the one pair of lazy hands to do with. I have a girl [domestic servant] but managing her as hard work as I have to do. Then the weather has been unpleasant and I have tried to keep the boys in and that almost drove me wild. Still I am so thankful that they are all well I can put up with the noise.”

In 1880, the land office was moved from Springfield to Watertown, and the Mellettes followed on May 4th. With no homes available in Watertown, the family camped out through July in a small dwelling on Lake Kampeska. Following this, the Mellettes bought a store with four rooms, where they lived and operated the land office. Feeling overwhelmed with the pressures of frontier mothering, Maggie sent her two eldest sons, Wylie and Charley, back to the Wylie House in September, 1880 to live and attend school during the early years of struggle in Watertown. Cut from the ideal of the home, the “woman’s sphere”, and separated from two of her children, Maggie’s early years in Watertown exemplify a departure from the maternal ideal and convey the difficulties of settling in the remote landscape of the west. 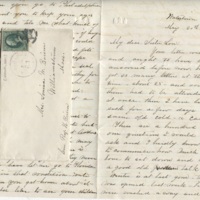 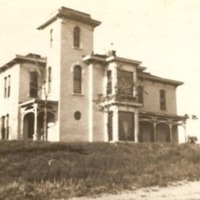 One of the earliest known photographs of the Mellette House, captured during the time the family was in residence

“Winter is at last gone, the road was opened last week, bridges were washed away and the trains did not run until a week ago. We got along better than you would expect. One week, in April I think, the roads were so that wagons could not go and as we had been blockaded for 4 months and supplies were gone, I actually thought I would starve. It was hard getting a meal without meat, butter, eggs, and sugar. I got weak and sick and have not felt so well since.”

While the Mellette’s early years optimize the rugged, arduous life of the West, the family eventually found considerable comfort and prosperity on the new frontier. In 1885, the Mellette’s built their permanent residence in Watertown, an Italianate brick home decorated in elegant Victorian style. And in 1889, after years of political involvement in the area, Arthur C. Mellette was elected Governor of Dakota Territory, later becoming the first Governor of South Dakota on October 1, 1889. Today, the Mellette House operates as a historic house museum and a monument of South Dakota History.

← Upstairs: The Responsibilities and Struggles of Childrearing
The Guest Room: Financial Issues and Widowhood →
The Boys’ Room: Maggie’s Story