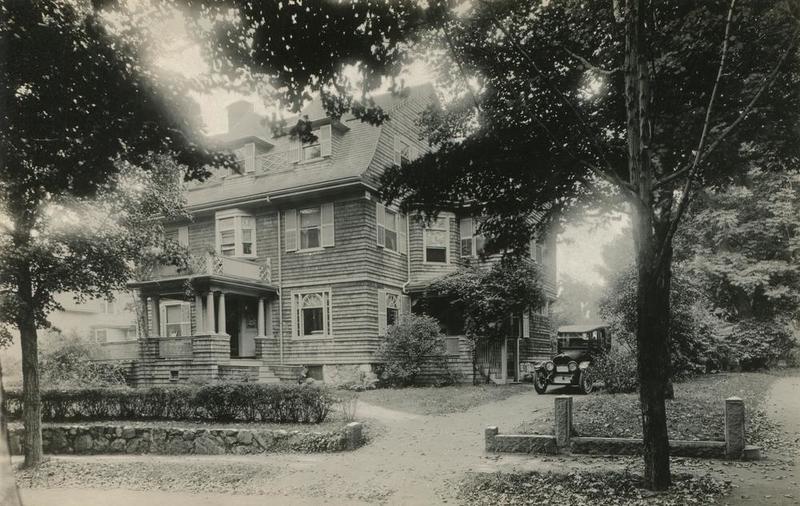 The Bradleys moved into their Arlington home in 1910.

Bradley stayed at Raytheon for the rest of her career and continued living in her parents’ Arlington, Massachusetts, home until her death, but the lack of any diary entries after 1933 makes it difficult to determine what came next.  Why did Bradley stay in her parents’ home her entire life?  Potential reasons include her health issues, her difficulty with romantic relationships, and her desire for stability.  Or, as her letters suggest, she may have just liked being with her family.  Whatever the reason, she was in good company, following in the footsteps of writers like the Brontë sisters and Emily Dickinson.

Bradley’s diary and letters show a deep love for her mother, father, and brother.  They enjoyed each other’s company, and Louise—or “Lulie,” as her family called her—and Bob did not seem inclined to break up the circle, as neither one moved out.  In Bradley’s diary, she wrote, “Daddy and I companion each other perfectly.  He is the most thoughtful person in the world” (7 February 1932).  Bradley's affection for her mother and brother comes out in letters she wrote from her vacation travels in the 1950s, after her father’s death.  She wrote from Bermuda, “I do wish I could talk with you or, better still, that you were sitting on my porch with me” (15 December 1958).

The Bradleys attended the Pleasant Street Congregational Church, two doors down from their house, and Marie and Louise were both members of the Kappa Alpha Theta sorority.  From time to time, the local newspaper mentions their involvement in church functions and Theta dinners, and in a letter to Bob on 12 December 1934, Bradley mentions her mother’s habitual “round of teas, bridges, etc.”  Bradley appears to have joined her mother in these activities when she was not at work.

One important question remains: did Bradley continue writing?  In 1934, in an unsent letter to Elizabeth Bishop, she wrote, “I am working very hard on several stories” (11 February 1934).  In her diary, she formed a plan to send each of her stories “to five magazines each” before “giv[ing] up” (30 March 1932).  There is no evidence that her work was published, so if she did send things out, nothing appears to have been accepted.  Whether or not this made her stop writing, not one of her stories exists today.  One holds out hope that, as in Emily Dickinson’s case, a trove of writings will turn up one day, but that possibility seems less likely with each passing year.

Today, Morton, Marie, Louise, and Bob share a headstone in Mt. Pleasant Cemetery, a mere half-mile from the home they shared in Arlington.