Science and Religion in the Nineteenth Century

In this sermon on evolution delivered in 1866, only 7 years after the publication of Origin of the Species, T. A. Wylie proposed that the theories of Charles Darwin and the tenets of religion were not incompatible. 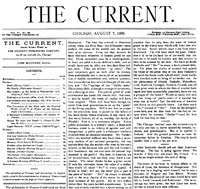 This article published in The Current, a popular periodical, addressed the issue of consciousness and how knowledge of physiology can help to understand the nature of the soul.  Articles like this show that Wylie sought to teach about the intersections of science and religion not only to his students, but to the wider public.

In this lecture from 1878, T. A. Wylie tried to reconcile religious doctrines with the laws of physics, suggesting that an understanding of the principle of force might help to understand the ultimate causes of physical phenomena.

In this diary entry from 1890, T. A. Wylie remarked upon a sermon he heard and wrote that discovering first or ultimate causes of phenomena "is what science is doing."

Charles Darwin published Origin of the Species in 1859, while T. A. Wylie was a professor of science at Indiana University and a Presbyterian minister at a nearby church.  Rather than condemning evolution Wylie engaged with it.  He did not think that it was inconsistent with divine revelation.  The items represented in this selection of items demonstrate Wylie's thinking on the intersections between science and religion.

For Wylie, the aim of all knowledge was to determine an ultimate cause of truth.  He believed that evolution was simply one method, among others, for determing the ultimate source of the universe which Wylie argued was a great mystery.  Many of the items in this collection focus on Wylie's public addresses on this topic, mostly the sermons he gave in the college chapel at Indiana University.  Wylie did not limit his thoughts to his students alone, however.  He also published some thoughts in a popular periodical at the time, The Current.  Wylie's other publications demonstrate that Wylie took his role as an educator not only locally, but regionally and nationally.

Wylie did consider the issues of science and religion on a personal level as well.  In his personal diaries, Wylie thought about the ways in which his personal faith informed his thinking about scientific matters.  This collection of materials also highlights a diary entry in which Wylie considered a sermon he heard.  Many of the ideas Wylie expressed in his diary, often found their way into his public addresses.