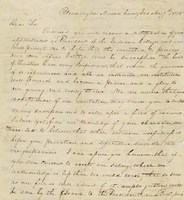 David Maxwell wrote this on behalf of the "Indiana College" (later Indiana University) Board of Trustees, invited Andrew Wylie to accept the presidency of the "infant college."  Under Wylie's leadership, Maxwell believes that Indiana University "will flourish and become a praise, and a glory, to our young and rising state."

Andrew Wylie gave this speech in 1837 and discussed the ways in which the University fit into the larger goals for educating young people within the state of Indiana. 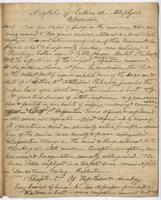 This syllabus of Andrew Wylie's on Metaphysics, shows how education in religion was still very important during the nineteenth century.  Andrew Wylie believed that all knowledge is fundamentally reliant on moral and religious principles, and this syllabus attempted to instill those values in students. 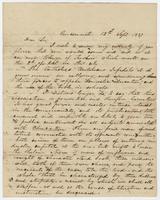 William Holmes McGuffey (known for his authorship of the McGuffey Reader) wrote to Andrew Wylie enlisted Wylie's aid against "Catholics, Unitarians, and Infidels" who were opposing public education and use of the Bible in public schools. McGuffey felt this would be deterimental and asked Wylie to attend the next College of Teachers meeting to help McGuffey oppose these measures.

Andrew Wylie wrote this pamphlet in 1840 addressed his experiences with sectarian religious strife and explains his motivations in leaving Presbyterianism for the Episcopal church.

Theophilus A. Wylie gave this speech to the graduating students of Indiana University while he was serving as the interim president in 1859.

This photograph of Theophilus A. Wylie shows him in his science classroom along with the instruments he would have used to teach his students.

Theophilus Wylie saw a part of his duty as a professor at Indiana University was to teach other educators in the state of Indiana.  This speech helped to provide teachers in primary and secondary schools some of the basic concepts of astronomy for use in their classrooms.

After his retirement, Theophilus Wylie wrote this history of Indiana University that includes biographies of faculty, presidents, and alumni of the university.  There are also essays discussing Indiana University during its founding.  This book helps to document the many changes education and the university went through over a period of about seventy years.

In the nineteenth century, universities taught not only vocational skills but also provided a religious and moral education.  The earliest presidents of Indiana University, including both Andrew and Theophilus Wylie, were ministers.  The items in this collection show some ways in which the Wylies thought about university education and their emphasis on teaching students about both skills and morals.

Andrew Wylie felt that moral education extended beyond higher education to schools at all levels.  In his correspondence with William Holmes McGuffey (famous for writing the McGuffey Reader used in primary schools), Wylie discussed the need for religious principles to be stressed from the earliest ages, all the way up to students at his own college.  Andrew Wylie also created a syllabus for his class in Metaphysics that brings together both religious and scientific principles.  Wylie stated in the syllabus that all "science" (by which he meant knowledge generally) can be reduced to two divisions that he terms "natural and moral philosophy."  The first division is what can be observed by nature; the second division is what is revealed by religion. Andrew Wylie believed that natural and moral philosophy were united. Wylie also struggled with religious groups who sought to control Indiana University; the issues Wylie faced eventually became so serious that he had to leave the Presbyterian church in which he was a minister.  Wylie later sought ordination as an Episcopalian.

Theophilus A. Wylie continued stressing many of the same issues as his cousin Andrew.  While he was serving as interim president of Indiana University in 1859, he delivered an address that stressed the difference between knowledge and wisdom; according to Wylie, knowledge can be taught, but wisdom comes from God.  Theophilus Wylie did, however, add a significant emphasis on science to the university curriculum.  He was a professor of "natural philosophy" (a nineteenth century term for science), chemistry, and physics.  Like Andrew Wylie, Theophilus Wylie also tried to make links between the university and primary education, and gave many lectures before teachers institutes and statewide education institutes.

At the end of his life, Theophilus Wylie continued to contribute to the understanding of higher education in Indiana.  He wrote a history of Indiana University after his retirement.  Though the history is largely a list of names, dates, and biographies of alumni, and professors, it serves as an important source for historians interested in understanding how Indiana University changed between its founding in 1820 and 1890 (the time Theophilus Wylie's history was published).

In all, these items help to understand the significant changes that Indiana University experienced.  This exhibit also chronicles a time when Indiana University changed from a small "seminary" focused largely on moral instruction into a more research-focused institution under the leadership of secular presidents.