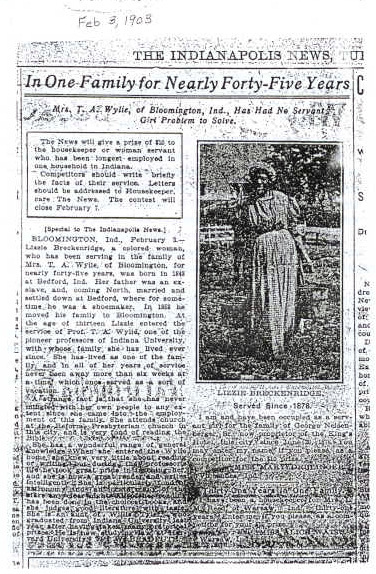 One of the Wylie House's few sources on Lizzie is a short newspaper article written about her service to the family. Towards the end of Lizzie's time with the Wylies, the Indianapolis News published a piece about her as part of a contest for the best female servant in Indiana. The article reads as follows:

"In One Family for Nearly Forty-Five Years"

Mrs. T. A. Wylie, of Bloomington, Ind., Has Had No Servant Girl Problem to Solve.

Bloomington, Ind., February 3.—Lizzie Breckenridge, a colored woman, who has been serving in the family of Mrs. T. A. Wylie, of Bloomington, for nearly forty-five years, was born in 1843 at Bedford, Ind. Her father was an ex-slave, and coming North, married and settled down at Bedford, where for some time he was a shoemaker. In 1852, he moved his family to Bloomington. At the age of thirteen Lizzie entered the service of Prof. T. A. Wylie, one of the pioneer professors of Indiana University, with whose family she has lived ever since. She has lived as one of the family, and in all of her years of service never been away more than six weeks at a time, which once served as a sort of vacation.

A strange fact is that she has never mingled with her own people to any extent since she came into the employment of this family. She attends church at the Reform Presbyterian church in this city, and is very fond of reading the Bible.

She has a wonderful range of general knowledge. When she entered the Wylie home, she knew very little about reading or writing but during the professor’s life he took great pride in teaching her, and she is now a great reader and writes intelligently. She is particularly fond of astronomy and can locate many of the stars any clear night. All of her reading has been done in the choicest books and she judges good literature with taste. She is an aunt of Willis Tyler, who graduated from Indiana University last year after having taken many oratorical prizes. He is now studying law at Harvard University.

The News will give a prize of $10 to the housekeeper or woman servant who has been longest employed in one household in Indiana.

Competitors should write briefly the facts of their service. Letters should be addressed to Housekeeper, care The News. The contest will close February 7."

According to Wylie family letters, Lizzie did not win this prize. However, the article provides information about Lizzie that would have otherwise remained unknown, as nothing remains in her own hand. Most notable is the mention of her literacy and scholarship. The 1880 Census states that Lizzie is illiterate, but based upon the information in this letter and Anton's mentions of sending her a book, it is likely that the recorder was mistaken (see Imagining Lizzie's Bookshelf). However, as with the family letters, this article should only be relied up on to the extent that its bias can be identified. There is no evidence found thus far that points to any connections Lizzie had beyond the Wylies and her own family, but conversely, it is hard to believe that she had no other friends or acquaintances in Bloomington. Other African American families are documented in the Perry Township censuses and in other parts of town. It is very possible that Lizzie developed a network that the Wylie family was not privy to while out running errands or visiting her mother. In light of an already-feeble paper trail on Lizzie, it may be that this part of her life will remain up to our imagination.

← Relationship with the Wylie Family
Death and Legacy →
Newspaper Article