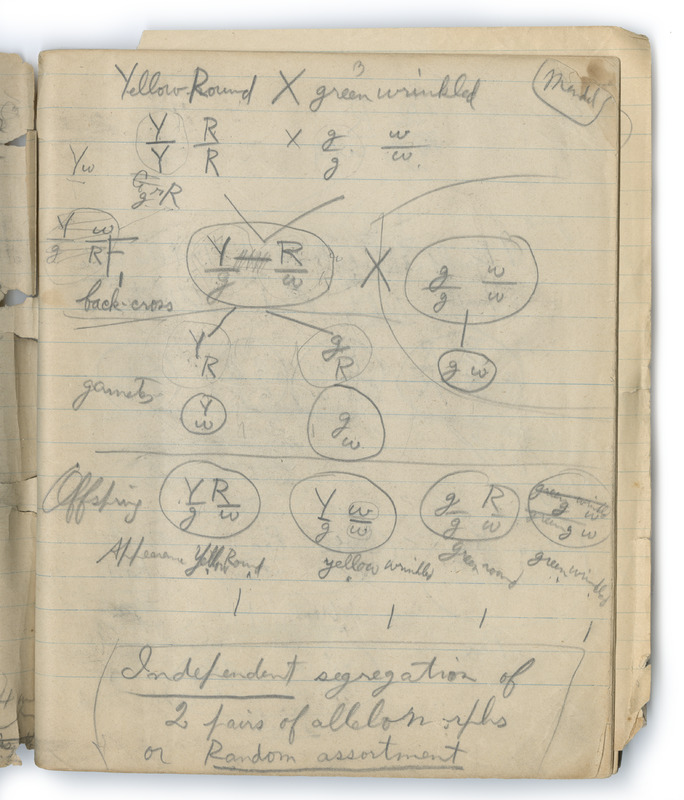 An excerpt from Muller's notes in T.H. Morgan's genetics class at Columbia university. Specifically, these are so-called Mendelian crosses in which traits are totally independent and assort freely.

In the first decade of the twentieth century, biology was in a period of great upheaval. One of the mysteries that emerged in the aftermath of Darwin was heredity. If organisms had developed over millions of years by passing along their traits with slight modifications in a sequence of tiny steps that ultimately resulted in vastly different species, then how exactly were traits passed from parents to offspring? And how were novel traits not simply swamped out by being blended with other traits?

Just a handful of years before Muller attended Columbia, three separate scientists, Carl Correns, Erich Tschermak, and Hugo de Vries, had rediscovered the 1866 work of the Austrian monk and plant breeder Gregor Mendel. Mendel had found that inheritance may be “particulate,” or inherited in discrete units. This contrasted with prevailing theories of blended inheritance, in which traits in offspring are an intermediate mix of parental traits. Mendel observed for instance that if a yellow pea plant is crossed (mated) with a green pea plant, rather than producing greenish yellow peas, as would be expected with blended inheritance, one instead finds a fixed ratio of green pea plants to yellow pea plants in the offspring.

This tale of “rediscovery” is traditional in histories of genetics, but also a bit misleading. Far from simply stumbling across Mendel’s work in a rarely used part of the library and realizing its significance, the rediscovers were involved in well-developed experimental programs of their own and only slowly came to the realization their work aligned with Mendel’s. 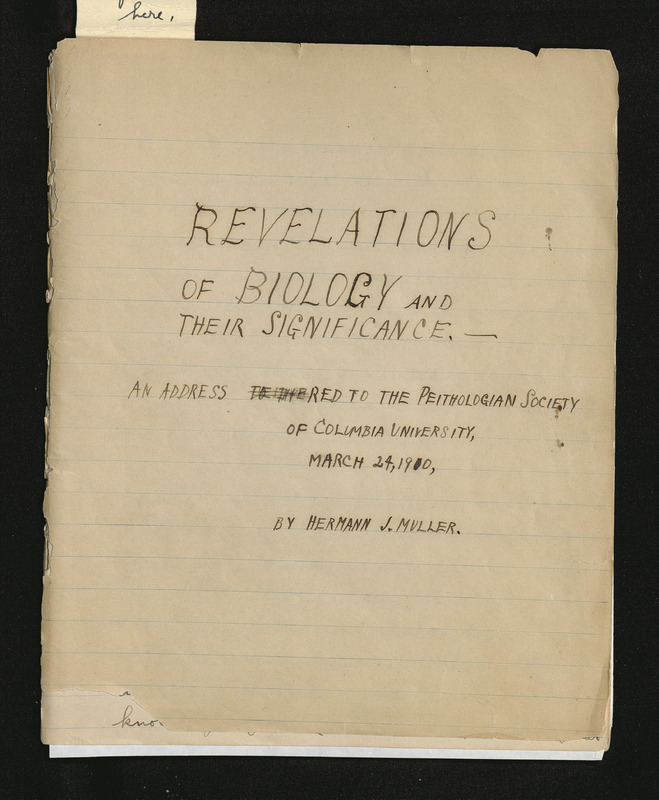 The themes presented in this talk for his college debate society are enduring ones for Muller. However, he would become significantly more nuanced in how he spoke and thought about the political implications of genetics.

Beyond observable patterns of inheritance, early twentieth century genetics was also interested in the ultimate physical means of inheritance. Wilson was one of the leading advocates of chromosome theory, the doctrine that the thread-like bodies which could be observed through microscopes multiplying and dividing during cell division, were in fact the carriers of the hereditary material. Wilson and his graduate students interpreted the separation and division of the chromosomes as physical causes behind Mendelian inheritance.

For Muller, Wilson’s undergraduate class was a thrilling experience. It covered the latest findings in biology and unified them under the aegis of chromosome theory. Muller became a true believer in chromosome theory and the new science of genetics. In a debate society he joined with his friend Altenburg, he also explored the political implications of modern biology, a topic that concerned him throughout his life.  In fact, almost twenty years later his college debate talk "Revelations of biology and their significance" would be expanded into his book Out of the Night.