Shortly after the debate, in early 1937, Muller heard that Stalin had read his book, Out of the Night. Stalin had rejected Muller’s vision of socialist genetics and was apparently readying an attack on the book. Having managed to personally irritate Stalin, and with no clear career prospects there, Vavilov urged Muller to leave the Soviet Union. However, he wanted to recoup some goodwill first to minimize the negative consequences of his departure to his colleagues. The plan was to join the Republicans in their fight against fascism in the Spanish Civil War, an international cause celebré. 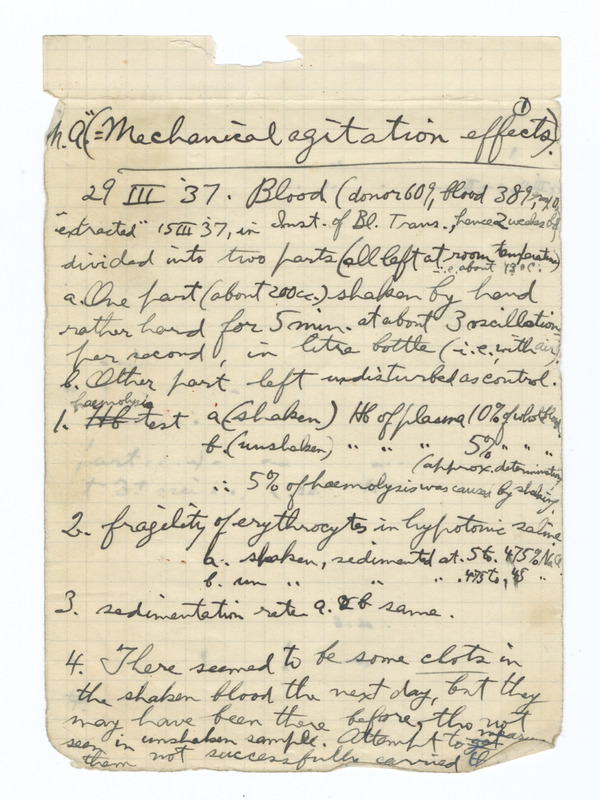 This is a small sample of Muller's notes on blood transfusion during the Spanish Civil War. Continuing a Soviet project, his research was on the viability of cadaver blood, a line of research which greatly interested Norman Bethune as well. More research notes are in the collection. 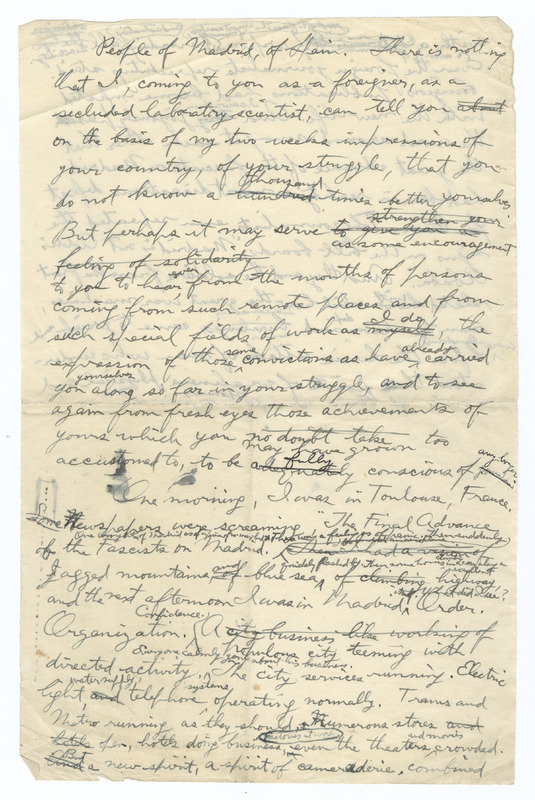 A speech Muller delivered during the Spanish Civil War.

The Soviet Union was the only major power that supported the rightfully elected government in Spain. The leftist Spanish Republicans were struggling to match the military aid provided by Hitler and Mussolini to the fascist insurgency led by Generalissimo Franco. Muller and Vavilov correctly felt they would not refuse volunteers. Muller joined the blood transfusion unit led by the renowned Canadian thoracic surgeon and political radical Dr. Norman Bethune, bringing with him Russian blood transfusion technology.

Canada, like the United States, France, England and many other nominally anti-Fascist powers had recognized the Republican government, but chose to sit back and watch rather than offer aid. However, there was a groundswell of support among leftists in these countries and many of them went on their own, to fight, to help, or to document history. Bethune himself would die a few years later working as a battlefield medic in revolutionary China. Back in the USSR, people were closely following the Spanish Civil War. Vavilov in fact wrote to Muller that his heroic rush into a collapsing building to help rescue some research had appeared in the Soviet papers. 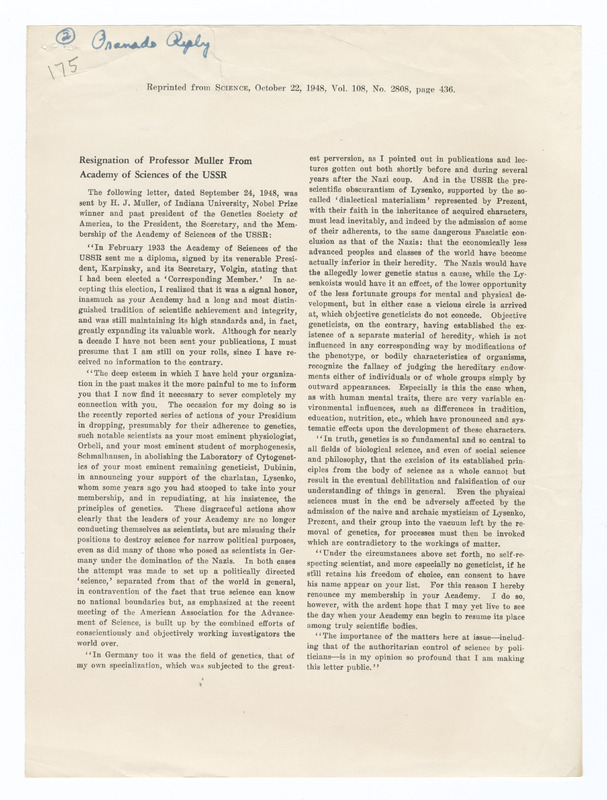 One of Muller's most striking moves in the fight against Lysenkoism in the Soviet Union occurred in 1948, when he resigned from the Academy of Sciences of the USSR. His resignation was precipitated by the Academy of Agricultural Sciences officially committing itself solely to Lysenkoism earlier that year. The Academy's public response, published in Pravda, the official newspaper of the Communist Party of the Soviet Union, sheds light on the degree of ideological entrenchment at the time. 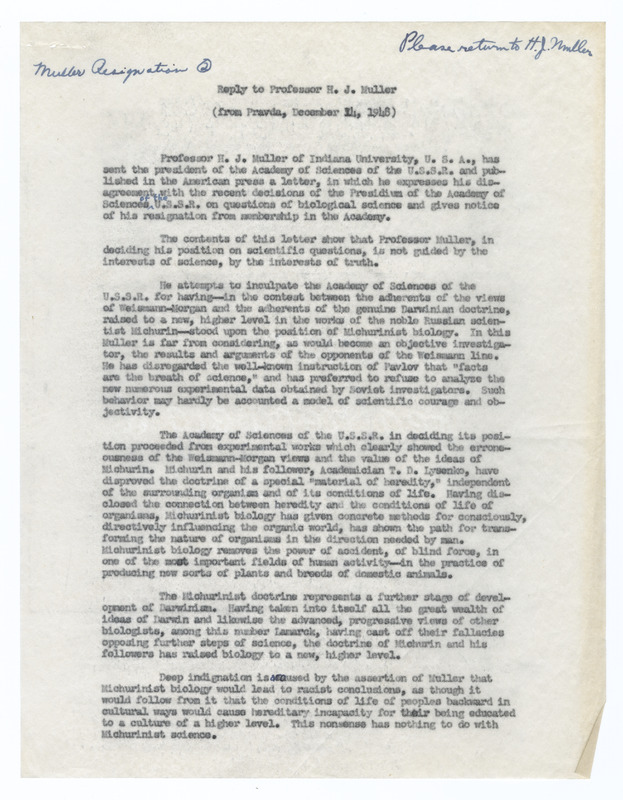 The public reply to Muller's resignation from the Academy of Science of the USSR published in Pravda.

Muller stayed in Spain for eight weeks and then briefly headed back to Texas, before returning to the Soviet Union. Having established his leftist bonafides with his time in Spain, Muller escaped after a final farewell with Vavilov in October 1937. Lysenkoism continued to grow and fester in Soviet genetics for the next several decades, being adopted as official doctrine in 1948, before finally being overcome in the 1960s, when Lysenko was removed from his position and Mendelian genetics could again be taught openly. The personal toll on Muller and his circle of friends and colleagues would be immense. Both of Muller’s former Soviet lab members from Texas, Izrail Agol and Solomon Levit, were shot on the “killing fields”, possibly before Muller had left. Muller’s friend and sponsor, Nicolai Vavilov, died of starvation in a Soviet prison in 1943 in the town of Saratov, near a university where he used to work. Many other geneticists shared their fate. Muller's experiences in the USSR closed the curtain on his communist sympathies, although he remained committed to broadly leftist politics for the rest of his life.