Leaving the US Behind 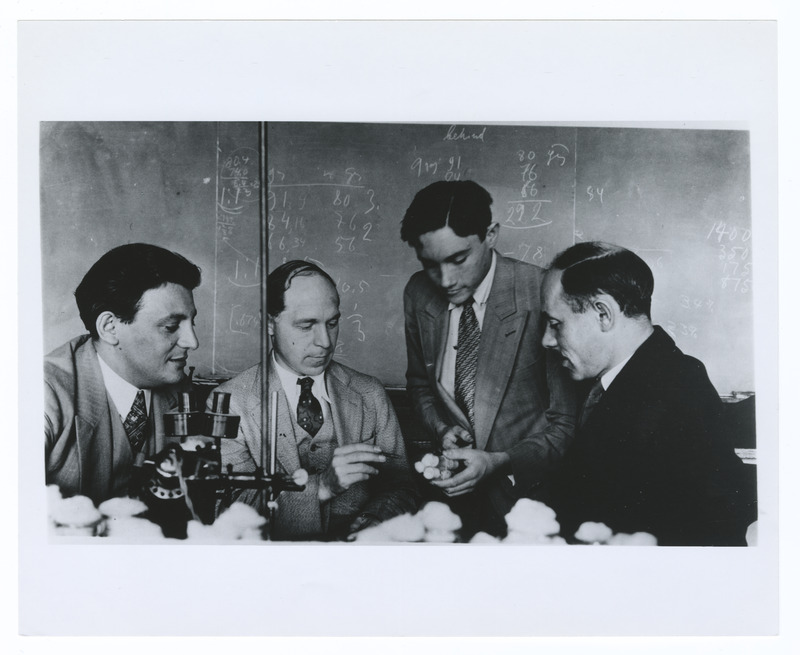 Right to left, Izrail Agol, Muller, Carlos Offermann, and Solomon Levit in the lab in 1931.

Muller's research continued apace throughout the latter half of the 1920s, and even through the stock market crash of 1929. This is not to say he did not feel the tremors. However, the effect of the Depression on Muller was primarily political and he shared in the wide-spread sentiment among leftists that the crash had exposed, utterly and irrevocably, the dangers and contradictions of capitalism. He began to secretly serve as a faculty advisor for the communist National Student League. Despite the time spent on Muller's increasing activism, his lab was larger than ever. He was joined in Texas by Carlos Offermann from Argentina, and Solomon Levit and Izrail Agol from the USSR. 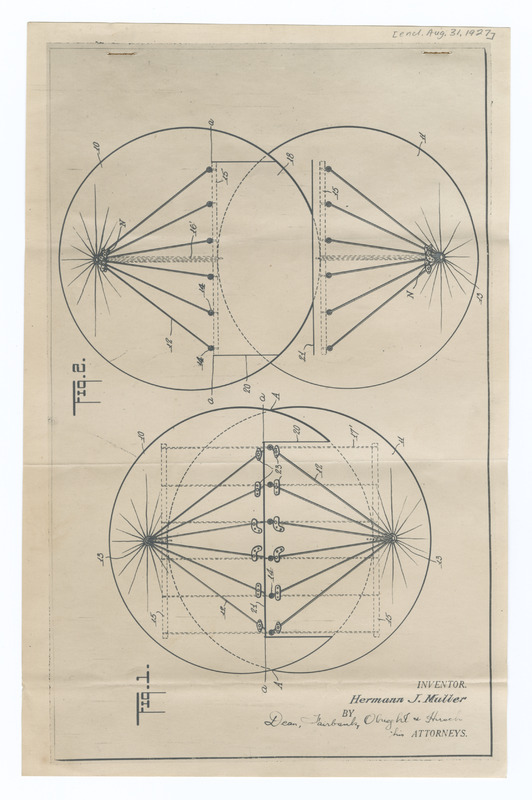 There was more to Muller's career than his research, and he was a committed if uncompromising teacher. He often invented weird contraptions to make the minuscule mechanics of cells more visible, like this device that illustrated chromosome division.

Muller added another notch in his belt with his 1931 discovery, with help from assistants Offermann and Bessie League (and parallel to the German-American geneticist Curt Stern), of dosage compensation. Dosage compensation was a name for the mechanism by which females, with XX sex chromosomes, produce the same dose of gene products as males with XY sex chromosomes rather than double the dose of X chromosome gene products.

Despite this discovery, the early 1930s were a difficult time for Muller. Rising scepticism in the field about whether X-rays really caused gene mutations or merely chromosome damage, difficult relationships with a number of faculty members at Texas, the diffuse weight of the Great Depression, a sense that Morgan might be sabotaging his career from afar, and a marriage in disrepair, all led to a suicide attempt at the beginning of 1932. When he failed to show up to teach and his wife could not otherwise locate him, a search party was formed. He was found in the woods some hours later, dazed by barbiturates and creeping hypothermia but alive. The Sheriff noted that had they not found him he would have perished. His suicide note, directed to his friend Edgar Altenburg, is one of the most personal items in the Lilly Library collection. It conspicuously avoids mentioning his wife's affair with Carlos Offermann. 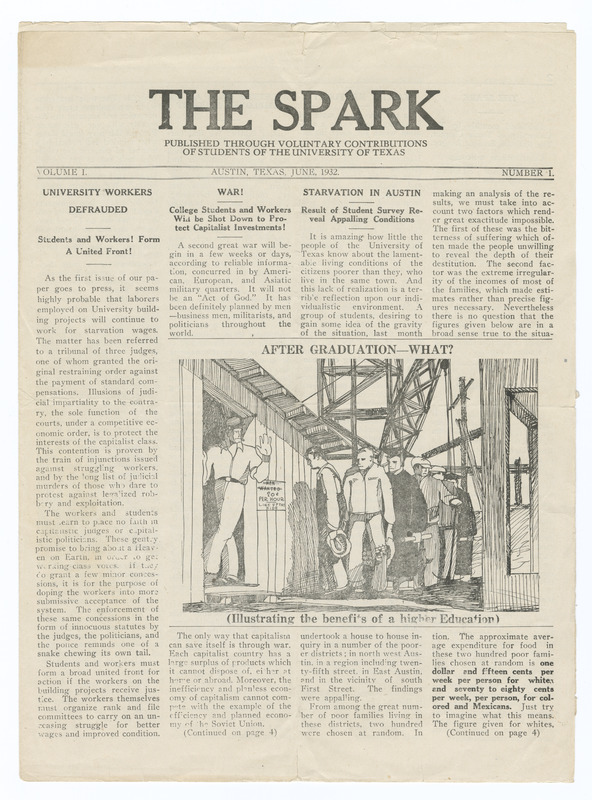 This is the cover of and table of contents of the Spark, the magazine released by the Texas chapter of the National Student League. It was the only one they ever released. The magazine was likely named after Iskra or "Spark" -- the official newspaper of the Russian Socialist Democratic Labor Party. Iskra was originally managed by Vladimir Lenin. The full magazine can be found in the archive.

Muller slowly returned to normalcy, and he was emotionally uplifted by his award of a Guggenheim fellowship to study in Berlin for several months. The fellowship promised an opportunity to get some distance from both Texas and America, as well as to work with pioneering radiation geneticists. Given that he was not planning to come back to Texas afterward, Muller sponsored the publication of the local National Student League chapter magazine which severely criticized the University of Texas and called attention to racism and the problematic depression-era conditions in Austin, Texas.