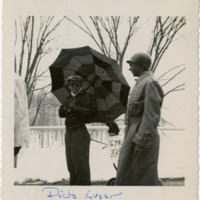 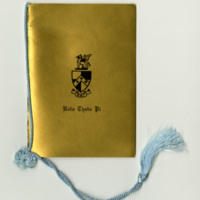 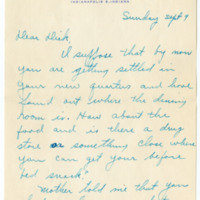 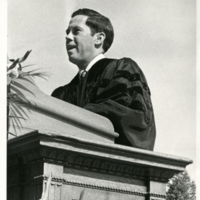 Richard Lugar excelled as a student at Shortridge High School in Indianapolis, and he continued his record of success at Denison University in Granville, Ohio. He was accepted by Princeton University and Carleton College, but he chose Denison. He received a four-year, full-tuition scholarship, one of only two awarded. He entered in 1950 and graduated at the top of his class in 1954.

Just as at Shortridge, he was involved in numerous activities, including debate, athletics, and student government. He also joined a fraternity, Beta Theta Pi, and remained active with the organization after graduation.

In the photograph to the left, an unknown person has pointed out that Lugar dressed as President Eisenhower for the Beta Military Ball, commenting “even then he knew where he was headed.” The Beta Theta Pi program to the right is for the Pi chapter at Indiana University in Bloomington. Lugar was invited to speak at their 1967 initiation banquet.

When Richard Lugar was deciding which university to attend, he was guided in part by his father’s illness at the time. Being located in Ohio, Denison was close enough to home so that Richard could return when needed. His father Marvin sent him several letters after he had settled in at school. The letters express a touching concern for his son’s health and contain reports about the family farm and brother Tom’s football team. Here, after inquiring whether Richard has found a place to buy bedtime snacks, Marvin Lugar writes, “It has been raining here about every day. Tommie and I went out to the farm yesterday but there was plenty of mud. All of the high school teams played in the rain and mud Friday night. If you need anything buy it there or we will send it, whichever is the most convenient. … With Love, Daddy.” 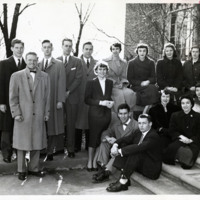 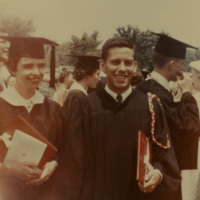 Richard Lugar and Charlene Smeltzer met when they were both students at Denison University. They were elected as the male and female co-student body presidents and shared governing duties. They both tell the story of how, when Charlene found out they would be co-presidents together, she said that she had no intention of “being pushed around by some pushy man!” They married in 1956 and recently celebrated their 62nd wedding anniversary.