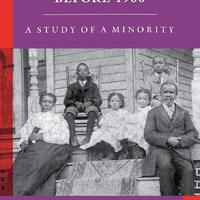 Read a short description of the items in this collection. 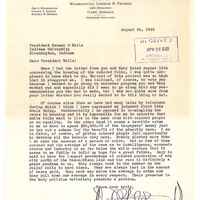 IU admitted its first African American student in 1882, at which time there was no campus housing. When the first campus housing became available in 1924, African American students continued to live off-campus or later, in segregated university housing. In 1947, student housing was desegregated but not without controversy, as this 1948 letter demonstrates. Even then the university did not house White and African American students in the same rooms. African American students were assigned African American roommates. Former Miss Indiana University, Nancy Streets-Lyons recalled an error made in her room assignment when she entered Indiana University in 1957 and she was paired with a White roommate – who had no difficulty with the rooming assignment. However, Streets-Lyons recalled that at the time “Bloomington was not a very nice place to be for black people” … “[Y]ou really had to pay attention to what you were doing”. She made the decision to room with her cousin in another residence hall to, in her words, “keep the peace”. Prior to this, students rented rooms in private houses that were willing to accommodate them. This was not always without difficulties as recounted in the experience of Carrie Parker who matriculated in 1898.  Read articles about the African American student experience during and after the racial ban.

The African American walking tour - City of Bloomington also refers to some of these experiences. 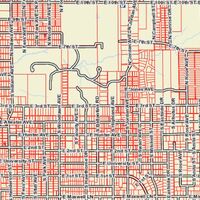 The Monroe County Recorder’s Office has been working on identifying racial covenants in deeds filed with their office, in partnership with the Monroe County History Center and the Geographic Information System Division.

Approximately 120 covenants have been identified to date, dating back to the 1920s. Most of the covenants relate to properties in the area immediately south of the Indiana University Bloomington campus, according to staff at the Recorder’s Office. This is painstaking work, as once a covenant is found, it is necessary to trace its existence through previous deeds to identify when the covenant was first inserted in the property deed.

When the project is ready to be launched, it will be available as a geographic information layer in the Monroe County Elevate Maps system.

These racial covenants are now unenforceable, but they undeniably shaped residential patterns in Bloomington. To learn more about racial covenants, we encourage you to visit the University of Minnesota Libraries “Mapping Prejudice” project, which shows how racial covenants shape patterns of race and privilege in the built environment.

The Monroe County Recorder’s Office also pointed out that Indiana now provides a means for homeowners to disclaim racial covenants if they exist in your property deed. Chapter 15 of the Indiana Code, added on April 1, 2021, permits a person to file a statement or notice that a recorded discriminatory covenant is invalid and unenforceable. This reflects the 1947 Supreme Court decision in Shelley v Kraemer.

Mapping Prejudice: What are Racial Covenants? 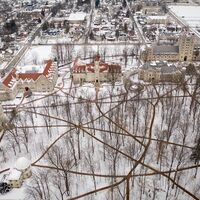 Allies in Bloomington, IN

The Indiana Public Media news report “Black History in Southern Indiana: Racially Restricitive Housing Covenants in Bloomington” recounts the struggles of two African American men facing discrimination finding housing. One man befriended a white lawyer before moving into the area who smoothed the way for him. The other, a Korean War veteran, who moved to Bloomington to work for Otis Elevator, after several frustrating incidents of discrimination, eventually received an offer from a Jehovah's Witness out preaching who was a builder and offered to build a house for him if he could find a lot to purchase - and this was the means by which he was able to own a home.

Read  - Trueblood, L. D. (1934). The Story of John Williams, Colored in the Indiana Magazine of History published and archived by the Indiana University Press and IUScholarWorks Journals.