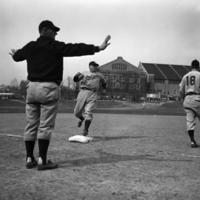 The advent of World War II significantly altered the lives of Americans across the country. Unable to avoid the conflicts befalling Europe and Asia, the nation was now a key partner in defeating the Axis powers.  Indiana University and the surrounding Bloomington community were not immune to the effects of global conflict brought by the war. Student lives changed as academic years were extended to three semesters to provide maximum education in a minimum time. To provide war weary civilians a break from the stresses of conflict, President Franklin Delano Roosevelt declared baseball essential to preserving morale on the home front. Wartime…