Tuition and Room and Board

Where did students live?

For much of the 19th century, Students boarded in town with private families or in what were called "Boarding Clubs".  Some of these Boarding Houses were owned by the University.  James Woodburn's history of IU provides a brief description of a major boarding house in 1849.  This boarding house stood on the southwest corner of the old campus.  It was a substantial two-story brick building.  On the first floor was a large dining room with student rooms on the north side and east end.  The second floor consisted of student rooms.  The house had rules and regulations which were strictly adhered to:  no profanity, no drinking of intoxicants, no gambling, and no improper conduct of any kind was tolerated.  The student rooms were cheaply furnished, but each student had the opportunity to make any additions at one's own expense. Overall these boarding houses were less expensive than living with a family in town.  The first boarding house and lodging hall for IU students was opened in 1838 on the Seminary Square campus.  This building was the first "dormitory" built and operated by Indiana University.

According to IU historian James Woodburn, in the late 1840s living prices were such that a student with a yearly allowance of $300 could have lived like a rich spendthrift.  In 1846, students could board and lodge wtih private families at from $1.25 to $1.50 a week for room and board only.  The student might have to find his own tallow candles or sperm oil lamp and his own cordwood.  To have clothes washed might cost another $4 a year. In 1837, eggs sold in Bloomington for 3cents a dozen, butter at 6 to 8 cents a pound and chickens at 75 cents a dozen. 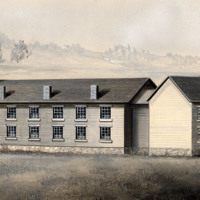 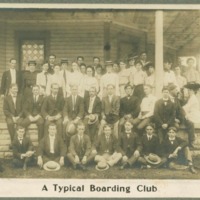 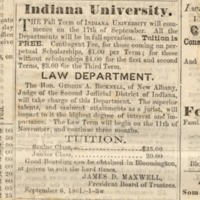 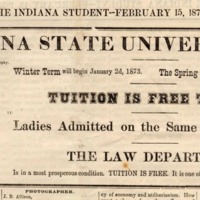 ← Curriculum
Literary Societies →
Tuition and Room and Board