In 1828 the population of Monroe County was app. 4,600 and of Bloomington about 600.  By 1850 the Bloomington population had grown to 1,300. The secluded location of IU was viewed as affording many advantages for study, but it also made travel to the University difficult.  IU catalogs in the 1840s and 1850s advised students who were coming by the Ohio River that they might land at New Albany or Madison and travel to the campus by stage and in the 1850s by railroad.  A stage coach line was begun in 1835 between Louisville and Bloomington.  After 1853 railroad connections were opened to Bloomington.

To give you some sense of what travel to Bloomington was like in the 1830s, it took Proferssor Theophilus A. Wylie 10 days of hard travel to journey from Philadelphia to Bloomington in 1837.   It required a railroad ride, a stagecoach, another railroad ride, then a packet boat on the canal, a journey on rail drawn by horses, two boat rides, and a stagecoach and hack.

In his journals T.A. Wylie writes:  "In the 1820s and early 1830s, Bloomington was a very isolated place; in those days, not even a turnpike road connected it with the outside world. It sometimes happened, in the beginning of the winter, that the clay roads leading to it were rendered impassable by the rain and frost, and sometimes for two weeks there would be no communication between Bloomington and the outside world.”

In 1838 Mrs. T.A. Wylie journeyed to Bloomington and recorded these impressions:  “When I came here in 1838 things were in a rather primitive state.  There were no railroads then in this part of the country, and the National road was just being built.  We came from Pittsburgh to New Albany by boat and the rest of the way to Bloomington in a stage coach drawn by four horses.  The roads were very bad; the stumps of the recently cut trees were sticking up in the middle of the road-way and grazing the coach at every turn.  As we approached the town I noticed a large brick building.  What do you think that is? asked my husband.  I think it must be a cotton factory, I answered.  No, my husband replied with a laugh, that is a factory for educating young men.  That is the College.” 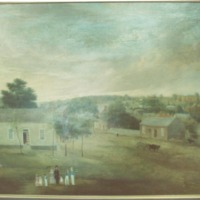 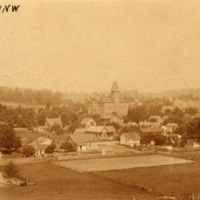 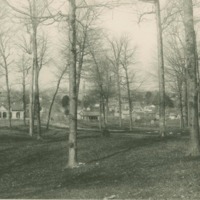 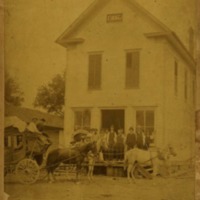 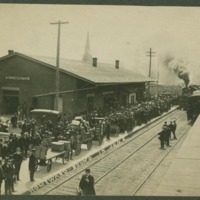 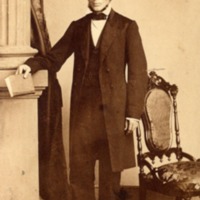