Bogus is a name given to lampoon publications produced by 19th century IU students to express their displeasure with the University.  The first known bogus newspaper appeared in 1873.  The 1878 version was called the DAGGER, and it declared that it had its origin “in a depraved condition of your college.  Three years ago,” said the editor, “four professorships in the State University were filled by persons odious to the students and highly disgraceful to the State.  The high positions of these personages enabled them to practice and encourage frauds of the deepest dye.”  The DAGGER said its purpose was to remove these frauds, and it proceeded to name them and to give the public a close-up student’s view of the professors.

In his memoirs, alumnus John D. Alexander (Class of 1861) wrote that it was a common occurrence for students to print bogus programs prior to exhibitions that gave the speakers “grotesque names and subjects.” The night before the performance, the boguses were “thrust under almost every door in town.” These publications caused university administrators great consternation, and they even tried to discourage students from creating them by outlawing them in the university’s rules and regulations.

The most famous bogus of September 17, 1890, led IU officials to finally take action.  This crude and vulgar underground bogus was described as “unusually adolescent in character and fecal in language.”  The citizens of Bloomington and the IU Trustees became emotional about the language used,  and pressured the University administration to identify and prosecute the offenders.  Finally the Pinkerton Detective Agency was hired to handle the case.  One investigator, known as "J.H.S." officially branded the paper a “vile publication,” and suggested calling the grand jury into emergency session and asked the Indiana attorney general to throw out a legal dragnet so that none of the “gang of infamous devils” would escape.  The culprits were eventually found and punished.

The first issue of the student-generated newspaper that is now known as the INDIANA DAILY STUDENT was published on February 22, 1867.  At first the newspaper was published twice a month and was more like a magazine than a newspaper.  The entries were mostly essays and poems, with numerous public announcements. The cost was 10 cents an issue or $1.50 per year. From 1867 until 1899 the paper was called the Indiana Student. In 1899 it was renamed the Daily Student, and in 1914 it became the Indiana Daily Student.

The first issue of the Arbutus, IU's yearbook, appeared in 1894.  It consisted of about 125 pages. 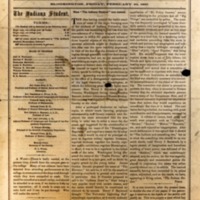