In the 19th century organized sports were nonexistent or only in their infancy.  Baseball was the first IU sport to be organized, beginning in 1867.  However, baseball was largely intramural until the 1880s.  The first intercollegiate baseball game played by IU was in 1883 when IU played Asbury (Depauw) University.  Asbury won that game by a score of 12 to 6.  Football did not begin at IU until 1886.  The first football game against another school was in 1887, when IU played Franklin and lost 10-8.   Basketball did not begin until 1898, and the first intercollegiate basketball game was played in 1901 against Butler, which beat IU 22-17.

So if students were not engaged in or watching organized sports for most of the century, what other sporting events were they participating in?  The answer is that they were involved in a 19th century form of intramurals, commonly known as Class Scraps.  These Scraps took many forms in the 19th century, but all basically had the same characteristics:  2 classes, typically freshman against sophomores, would engage in a physical and often violent contest or brawl to best the other team in some challenge.  These contests often had very few rules, especially in the early days, but as time went on some basic rules and regulations were added.

Some say the earliest Scrap dates back to the 1820s and relates to an event that expressed IU students dislike for studying Latin.  According to these accounts sophomores, who were required to read Horace in Latin, celebrated completion of the course by burning their books.  One year, the freshman objected to the ceremony, a scuffle ensued and the class scrap tradition known as the Burning of Horace was started.  After a while these Burning of Horace Scraps became more organized and resulted in challenges being published and distributed on homemade broadsides.  Here is an example of a challenge written in 1903 - "FRESHMEN, BEWARE!!!!   To that white-livered aggregation of conceit and ignorance known as the Freshman Class, whose unhealthy presence is a mortification in the vitals of civilization and a disgrace to the century which with shame recognizes their existence, this warning is directed.  Filled with pain at the hollow and pretentious mockery which here rears its infamous head, the valiant Sophmores have determined to rid the earth of this brood of insignificant vipers."

Here is an excerpt from a broadside annoncing the results of a confrontation between classes:  "VIRGIL NOT BURNED.  Last night when it became generally known that the Perp. Seniors intended to feed Virgil to the flames, a small crowd of irregulars and Juniors met them on the College Campus and completely thwarted their design.  The entire Senior class of 21 girls and 11 boys appeared at the fence but their courage fell when their eyes fell upon the well formed ranks and orderly line of the Juniors...The flames were soon extinguised by the noble Juniors and the Seniors went home to yell no more."

Eventually this scrap tradition expanded into other forms of mayhem and became more imaginative and more elaborate.  A popular version was known as the "Flag Rush."  In this scrap, a class would hang their class flag on a tree or pole and defend it against the onslaught of another class.  Eventually rules were created as outlined in the following agreement written in 1910.  Flag rules concerned the height of the flag, the time it had to be defended and the material used in making the flag.  It became exceedingly important to control the materials used in making the flag, for in some years where the defending class was not restricted, it did such things as making the banner out of very thick canvas and leather and then nailing it to the tree with strips of sheet metal. Therefore, according to the agreement the "banner shall be made of three layers of canvas without any foreign substance.  There shall be two rows of stitching around the edges and one row from the apex to the base...The banner shall be put up with three ordinary ten-penny wire nails and with nothing else."

During its history this scrap witnessed a number of ingenious strategies for capturing the flag. A history of the class scraps describes some of the more creative strategies (none of which were ever implemented it appears): 1) Tunnel from under Kirkwood Hall to the scrap tree and then surprise the freshmen during the scrap by coming in from under them;  2) Parachute from the roof of Kirkwood Hall and grab the flag on the way down; and  3) Electrify  the flag so that anyone grabbing the flag would receive a shock.

In addition to the formal class scraps there were the less organized and regulated acts of class warfare.  These included hair cutting and painting students of another class, tying them to trees, taking student hostages, and disrupting a class meeting or election.  An example of the latter occurred in September 1904 during a freshman class election, where the proceedings were suddenly broken up when members of the sophomore class attacked en mass.  To ensure maximum effect the sophomores released formaldehyde fumes into the room.  In another example from 1903, 50 freshman rushed the room of single sophomore to finish a half-completed job of haircutting and were turned away by the sophomore leveling a shotgun at them.

Many of these scraps, particularly in the early years, were violent affairs, and at times resulted in broken bones, lost teeth, and in damage to University property.  One might ask why were these scraps so violent? Two possible explanations have been suggested.  In the first place, students of this period were primarily farm kids used to rough life and fighting, drinking, knife play, pranks, and general rowdiness. In short, violence was a way of life. A second reason stems from the prevailing philosophy of the time governing faculty/student interactions known as In Loco Parentis or In the Place of the Parent.  According to this philosophy, all things related to the students were the concern of the university administration including conduct, values, moral development, and appearance.  As much emphasis was placed upon discipline as upon learning.  The philosophy of In Locus Parentis is captured in a quote by IU’s first present Andrew Wylie when he writes: "the society of a college ought to be a family, in which the Faculty is the parent, and the pupils the children-of different tempers and attainments...but all under the same kind and paternal government."  A number of historians of education have concluded that violent outbursts, like the class scraps, can be viewed as a reaction to this type of control exerted by Universities. Following the Civil War period, students began to display more independence and to make more demands to control their own lives.  Increasingly, they were less willing to submit to the parental control exerted in the past by the University.  One of the expressions of this independence was the class scrap.

Of course, the violence and destruction to University property caused by the scraps did not go unnoticed by the university administration.  Its response was twofold:  1) prohibit the more violent forms of the scraps, such as Burning of Horace, and of other activities, such as haircutting and hostage taking; 2) attempt to transform the scraps  into less violent, more regulated contests, such as football games or wrestling matches, tug of war contests, team races or other contests that involved less violent encounters.  This transformation of the scraps to less physical contests began in earnest around the turn of century, and by 1910 several other types of less violent, more rule bound events were being introduced.

Overall, IU administration was largely successful in reorganizing and transforming the scraps.   Enough progress was made so that in1924, the IU Student Affairs Committee felt confident enough to pass an anti-hazing act designed to outlaw the scraps in its most violent forms.  This marked the beginning of the end for the class scraps.  By the end of the 1920s the class scrap at it was known for the past century virtually disappeared to be replaced by other forms of intra-mural and organized sports. 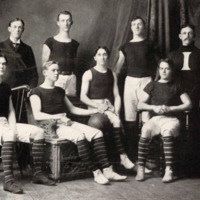 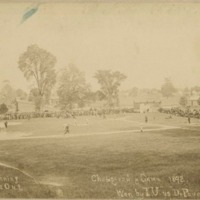 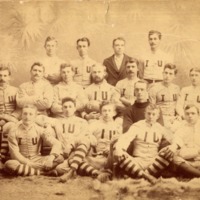 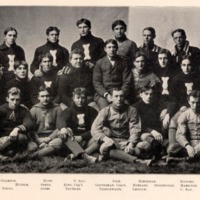 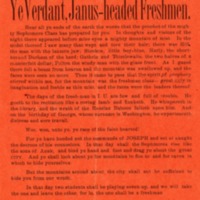 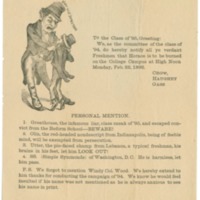 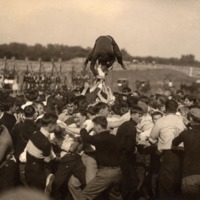 Photo of a Class Scrap 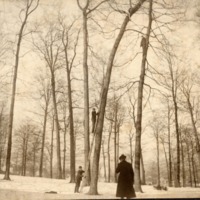 Hanging the Flag for a Class Scrap