For the first three quarters of the 19th century literary societies were as necessary to student life as sports and fraterernities and sororities came to be in the 20th century.  Almost from the opening of the first classes in 1825 there existed a literary society.  Indiana's first professor, Baynard Rush Hall, organized IU's first literary society, the Henodelphisterian Society  This society emphasized classical interests; members even assumed Greek and Roman names during meetings.  However, before long the society found itself torn apart by rivalries between student native to Indiana and students from other states.  In 1830, nine students split from the society to form the Athenian Society.  The following year students created the Philomathean Society.  By the 1850s the Athenians and the Philos were large enough to dominate the intellectual and social life of Indiana University's student body.

While the Athenians and Philomatheans were the major societies on campus, additional clubs did form over the years.  When IU’s first female student, Sarah Parke Morrison, entered in 1867, she wanted the opportunity to fully participate in campus activities, including the literary societies. The men, however, would not admit her to their clubs. Consequently, by 1870 the Hesperian Society was established for the IU coeds.  Over the course of the 19th century 8 literary societies existed at IU.

The University Archives has programs, minutes and a few more detailed descriptions of society meetings, so we have a good idea of the kind of activities undertaken by these groups.  In a History of Literary Societies at Indiana University by Dorwin Nelson, the author summarizes the activities of the Hesperian Society based on the minutes of the Society.  They included:  Devotional exercises, appointing critic, appointing jury, debate, optionals, declamations, essays, report of critic, general criticsims, reading of minutes.  Nelson also includes a quote from a student who describes a typical evening in an Independent Literary Society meeting:  "let us imagine ourselves down in the old college building...in front of us is a small rostrum; back of a table thereon are seated two dignified officers, the President and Secretary...Toward the front we see a row of faculty members and their wives...At eight o'clock the President raps on the table with the wooden gavel...The President rises, opens a small Bible which always lies on the table before him, and reads a brief chapter.  Then the Secretary's report is read and passed upon.  After the critic is appointed, the program is taken up.  Leading off the program is a quartet which is followed by an oration on 'Sociability.'  Another member reads a paper on 'Birds in the Night.' An instrumental solo is next followed by another oration, 'Why I am a Democrat.'  The program is closed by the new whistling quartet.  After the program comes the report of of the much feared critic.  Sometime appreciative, more often caustic, his remarks are an inspiration to better effort, or perhaps call forth vexed or humorous retort."

So we can see that the main activities at Society meetings were debate, declamations or speeches, reading of essays, and musical numbers.  Other less prominent activities included reviews of books and plays, holiday parties, and occasionally dances.  Of all these activities, debate was the most popular and was generally the centerpiece of the meetings. For these debates very specific rules were created on the length of presentations, and on how they would be judged and evaluated.  The most dramatic and lively debates were those between students from different literary societies.

Why were literary societies so popular?  Most scholars would agree they were popular because they filled a social and an intellectual void in the lives of the students.  They filled a social need in the sense that the societies provided a place somewhat beyond the long arm of the University Administration, where students within certain bounds could cast off the parental controls of the faculty and feel free to express themselves.  The societies filled an intellectual void by providing a forum for students to hone their speaking and writing skills and to test those skills against other students.  Since public speaking skills were so important in the 19th century, these societies prepared students for becoming successful professionals.

When and why did the Literary Societies decline and disapper?   Literary societies began to gradually disappear in the last three decades of the 19th century.  By 1887 the Athenian Socity had dwindled down to 15 members and the Philomathean Society to 20.  The Bloomington Telephone reported on 25 November 1892 that "on account of lack of interest the Philomathean Society has died a natural death." The Philomathean Society was listed in the IU Catalog for the last time in 1893.   Scholars have suggested that this trend resulted largely from the decline of the classical curriculum (upon which the literary society activities were built), and the rise of competing activities such as athletics and the emergence of fraternities and sororities.  An article in the 1894 Arbutus, IU’s Yearbook, chronicled the disappearance of the literary societies.  Here is what the reporter had to say:  "By the last decade of the 19th century, the IU literary societies had literally outlived their usefulness.  As one writer stated: 'they no longer serve a purpose, no longer supply a demand; the sympathy of the age is not with them and they are giving place to instruction more in harmony with the spirit of the times.' "  So at the turn of the century it was good-bye to literary societies and hello to fraternities and sororities.  For more information on IU literary societies, please consult the finding aids to the records of serveral of these societies:

The second half of the 19th century witnessed the birth of fraternities and sororities on the IU campus.  The first fraternity to be established at IU was Beta Theta Phi in 1845.  In 1849 Phi Delta Theta was created, followed by Sigma Chi in 1858.  For women, Kappa Alpha Theta was the first sorority organized at IU in 1870; the second was Kappa Kappa Gamma in 1872.  By the end of the 19th century, there were ten fraternities and four sororities at IU.  The first houses of IU's Greek-letter organizations were converted family residences located on the periphery of the campus.  Gradually, sororities and fraternities were able to finance the purchase of buildings planned as chapter houses along 3rd, Jordan, 10th, 7th, Woodlawn and other streets. 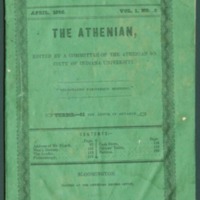 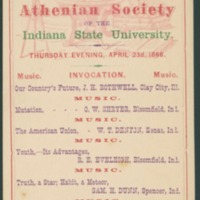 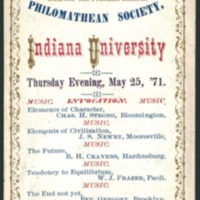 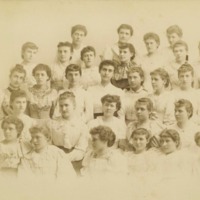 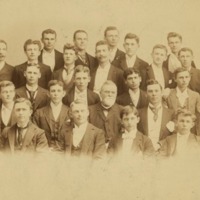 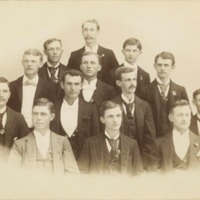 ← Tuition and Room and Board
Sports →
Literary Societies