In 1828 IU began its first or winter term on December 1 and closed the latter part of April.  The second term opened in June and closed the late week of September.  In 1851-52, the academic year was divided into 3 terms: Fall session opened in August and closed on December 24th; winter term began January 2nd and closed early in April; summer term began early in May and closed in early August.  Every school day opened with chapel exercises at 8:00 or 8:30 in the morning.  For most of the 19th century, chapel excercises were mandatory, and attendance was checked by professors calling the roll. Until the 1880s, the University was almost solely a morning school, with classes held at nine, ten and eleven o'clock.

For most of the 19th century the curriculum for IU students followed the Classical Education model.  The freshman in 1840 were given Greek and Latin, together with rhetorical reading and declamation.  The sophomores had to take algebra and geometry.  The juniors were given more mathematics and were introduced to what was called "natural philosophy" (Physics) and Chemistry.  The senior class spent the whole year under the immediate direction of the President of the University studying rhetoric, logic and philosophy and some political theory. At this point in time, there were no electives.  "One principal study at a time" was the rule until the 1840s.  In other words, the student had to be thoroughly grounded in one subject before he was allowed to take up another subject.  Much emphasis was placed on public speaking, debates, speeches, memorization and constant drill.

In his history of IU, James Woodburn, class of 1876 and former professor of American History at IU, defined the curriuculm of the 1870s-1880s:  “Most of us took the ‘classical course.’  Like the old time religion, it was the old-time course.  It gave us the ancient languages, Greek and Latin, and 2 or 3 years of mathematics.  Then in our Junior year, we had mental philosophy and physics, which was called natural philosophy…As seniors we had (as seniors had had for decades before us) moral philosophy (or abstract ethics) and evidences of Christianity…. There were no electives, no specialities.  We all studied the same things, four studies a day, 20 recitations a week; we all passed together, in the 5 minutes allowed, from one recitation to another and sat together on the same benches side by side 4 hours a day for 3 or 4 years at a stretch.”

Classroom procedures in most of the courses were rigidly set.  Students stood when called upon and recited verbatim from the text.  Any deviation, argumentation or mumbling resulted in a low grade, accumulation of demerits or a tongue lashing by the professor.  In math, physics and other science courses, professors often performed the experiments or demonstrated to the classes the principles they wished to communicate.  Students were often asked to write solutions to questions on the board.  There were far fewer written assignments than there are today.

Completion of work leading to a degree depended upon classroom responses, behavior and even a periodic appraisal of the student's moral character.  In order to graduate, seniors had to pass a comprehensive examination. These final exams were public affairs to which all the intellectuals of the community were invited, and the general results were published in the local newspaper.

Changes in the Curriculum:

In the 1850s changes in the curriculum occurred that most often involved the addition of science courses.  In 1854 courses were instituted to anticipate an agricultural science program.  The Bachelor of Science degree was first granted at IU in 1855, but it was not until 1860 that the science curriculum was lifted onto an even plane with that of the bachelor of arts program.  By 1868 the scientific program was lengthened to 4 years, and the full time students in these courses were given freedom of choice between classical and modern languages.

Events occurred in the 30 years following the Civil War which resulted in significant changes in the way Americans lived and worked and in their habits and values.  Educational theories and practices were not immune to these influences.  The educational structure of 1900 was radically different from the one described above, and Indiana University changed along with rest of American education.  IU historians would agree that these changes took root and flourished during the Presidency of David Starr Jordan.

In 1879, Jordan joined the IU faculty as professor of natural history.  In 1885 he was appointed IU President; Jordan was 34 years of age. He was the youngest person as well as the first non-clergyman to hold the University presidency.  He served in that position until 1891 when he left IU to become the first president of the newly established Stanford University.  Jordan's Adminstration has been called a "New Era", a "New Epoch".

Curriculum Changes in the Jordan Era included more freedom in selecting a major and in designing one's own curriculum.  There were fewer required courses and more electives.  During Jordan's tenure more courses were added to the catalog providing students with more choices.   Much of this was achieved by creating new departments or dividing already existing units into 2 separate departments.  The result was that in 1891 when Jordan left the IU the curriculum is significantly different than when he arrived in 1885 and radically different from the one that existed in 1850. 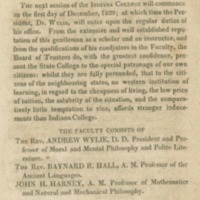 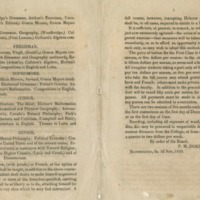 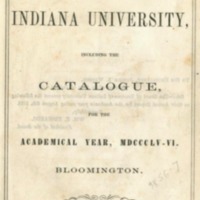 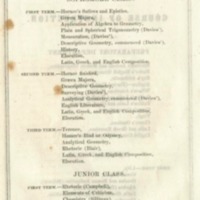 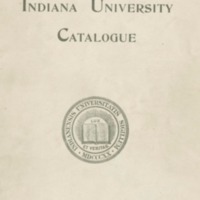 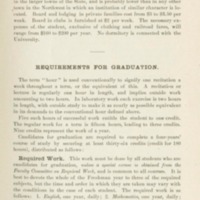 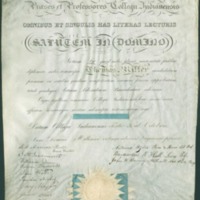 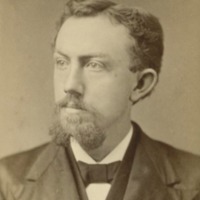 ← Travelling to Bloomington
Tuition and Room and Board →
Curriculum