Theta Sigma Phi, now known as the Association for Women in Communications, is a national professional journalism society for women.  The sorority was founded in 1909, and the Indiana University chapter was established soon after in 1913.  This was a significant accomplishment during a time when women did not even have the right to vote.  The IU chapter was composed of particularly dedicated aspiring journalists, who took their chosen field seriously.  But the members also had a sense of humor, and once a year they would put a great amount of time and effort into hosting their annual Razz Banquet.

The IU chapter of Theta Sigma was known across campus for the Razz Banquet, modeled after the national Gridiron banquet, in which journalists would poke fun at politicians.  Beginning in 1929, the members of Theta Sigma put together an invitation only banquet where they would “roast and toast” I.U. women, often referred to in campus slang as “roddesses.”  The banquets had a reputation for being somewhat scandalous.  The Theta Sig members, acting as hosts, would “razz” the attendees, allegedly divulging the secrets and misdeeds of the semester.  The 1938 Arbutus claims, “there is one organization on campus which, no matter how honorary it may be, is still feared secretly deep down in the heart of each co-ed.”  In fact, the affair was likely more entertaining than tormenting, as described in the 1948 Arbutus: “Once dubbed ‘The Ladies of the Purity Press,’ the Theta Sigs invite the cream of the roddess crop to the Razz Banquet and spend the evening joshing their guests.  The roddesses retaliate by returning the Razz, and quips fly back and forth, all in fun.”  For many decades it was an extremely popular event, often with around four hundred students in attendance.

During the banquet, speeches and toasts were made and the “scandal scoopers” would distribute facetious awards for students’ “misdemeanors, indiscretions, and the instances where they have ‘goofed.’”  Many humorous awards were given, such as awards for “apple polishers” and cokes to students who spent the most “coke hours” at the commons.  For many years an infamous purple bra was awarded to a student who met criteria Theta Sigma refused to make known, but the implication for some was that the recipient was one who had racked up the most indiscretions.  In addition to the purple bra, a white lily of purity was also awarded for undisclosed reasons, although it was easy to speculate.  Serious awards were also presented.  The Theta Sigma Pi ring was given each year to the most outstanding students during their four years at IU.  Some years the journalism faculty also awarded a recognition plaque for the most outstanding journalistic work.  Theta Sigma also used the banquet as an opportunity to induct new members.  Sometimes these inductees were “capped” with straw hats during the banquet, or earlier in the day.

The event also allowed Theta Sigs to display their satirical writing talents, as they wrote and acted in elaborate skits, poking fun at campus life and their profession in general.  Often the banquets were themed events with corresponding parodies.  Themes often came from the pop culture of the day; Alice in Wonderland and Little Orphan Annie were both lampooned by the Theta Sigs.  In 1954 the “razzed roddesses” received “Hermans,” meant to mimic the Oscar, in a banquet titled “The Farce on the Cutting Room Floor.”  Awards given that year included best supporting actress, best producer, best director and most uncooperative actress.  In 1929 the group converted the auditorium into a court, complete with padded cell, scaffold and torture chamber, where, according to the Indiana Daily Student, “malefactors did penance for their hithertofore concealed misdemeanors and indiscretions.”  The 1955 banquet took the theme of Dante’s Inferno and the Theta Sigs dressed as devils.  The 1956 Razz was such an elaborate affair it was written up the Louisville Courier-Journal.  The theme that year was “I.U. Confidehshul,” and the skit included members of the fictional gossip publication, modeled after a popular celebrity magazine, Ima Snooper and her three reporters Galley, Slug, and Tab.  The Theta Sigs also rode around on bicycles, tricycles and scooters in a skit poking fun at the Little 500.

Although the banquet was a somewhat frivolous event, Theta Sigma Phi clearly took their chosen field very seriously.  Indiana University members were exceptionally dedicated to fostering a sense of community and promoting professional development opportunities for their members.  Impressively, early on in the group’s history, one of the requirements for membership was the stated intention to make journalism her career.  And members were actively involved with the Indiana Daily Student, often holding editor positions.  The sorority also sponsored an annual Matrix Table conference, inviting prominent women from the field of journalism to speak to the group.  As Kathie Neff president of Theta Sigma Phi wrote, “female journalists in Indiana University take not stock in the ‘pantywaist’ jibes tossed their way by their male fellows.  In fact, they defiantly uphold their status as members of the working press on the campus daily, ‘The Indiana Daily Student.’”

The banquet was not without controversy over the years, and often seems to have been perceived as a wilder and more scandalous affair than it may have been in reality.  In 1941 the Student Affairs Committee drafted a letter objecting to obscene material in posters advertising the event, and to the purple brassiere, which they considered cruelly damaging to the recipient’s reputation.  The Student Affairs Committee also objected to comical awards that referenced student drinking and “the bestowing of a large number of bottle openers” which “calls undue attention to the matter of drinking.”  The Committee requested approval over future scripts and asked that awards be given only for merit.

The General Chairman drafted a report on the 1956 banquet asking Theta Sigma Phi: “Has the I.U. campus now become too large and too sophisticated to enjoy and thus make worthwhile the continuance of the Razz Banquet?”  The Chairman pointed out other financial concerns and the amount of time required to make the banquet a success. He also pointed to a growing “non-interest” in the student body.  Members of Theta Sigma Phi voted to cease the Razz Banquet in 1957.  The Chairman’s concerns over funding, time and the alleged disinterest of the students were likely factors in their decision. 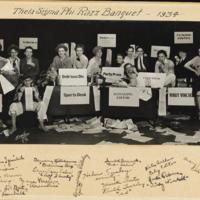 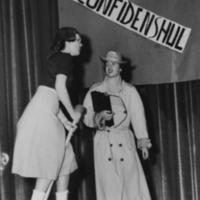 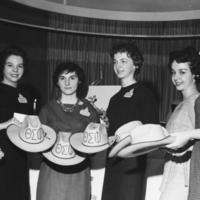 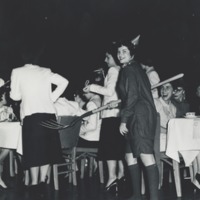 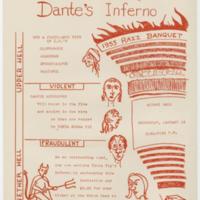 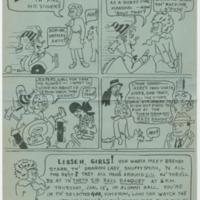 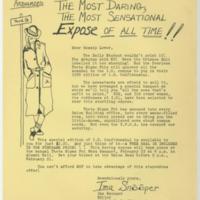