The Jordan River Revue was a musical variety show written, produced, directed and acted in by Indiana University Students, with a few exceptions.  The Revue was popular throughout the state; after a few days of performances at the University, the Revue would tour the state of Indiana, stopping in cities such as Lafayette, Fort Wayne, Muncie, Indianapolis, and Evansville.  Often performing for alumni, as well as for other enthusiastic Hoosiers, the Revue was known across the state as “Indiana’s greatest musical comedy.”  An outgrowth of the Vaudeville age, the Jordan River Revue was a popular sophisticated showcase of student creative talent.

Charles Hays, a former superintendant of buildings and grounds, is thought to have launched the first Jordan River Revue in order to raise money for the Memorial Fund.  To elicit interest in the production, Hays cast women in the show at a time when women were seldom allowed on stage, and men usually played female roles.  The Union Revue, the IU musical precursor to the Jordan River Revue, only allowed men to take part in the production.  The first Jordan River Revue opened March 2, 1922 at Assembly Hall.  Although it was below freezing outside on opening night, the Revue raised $600 for the memorial fund.

The first performance in 1922 was not a student authored production, but the following year, the students began to write and produce as well as act.  One of the reasons students eagerly anticipated the Revue each year was because it was open to students from all areas of study, and was not merely the work of the theater and speech departments.  The first original script of the 1923 Revue involved six “sleuths” searching for a girl who had run away to attend to school “in the land where the Jordan River flows.”  The Revue was usually a romantic comedy set on campus, but as the years progressed the Revue broadened its scope to tackle a variety of imaginative themes, including adventures in the South Pacific, carnivals, and witches.  A March 15, 1958 article in the Indiana Daily Student claimed that one past Revue included “a fire eater and another year a flying saucer descended on the stage.”

The Revue was often a major undertaking involving elaborate musical and dance numbers, costumes, and sets, all of which was the original work of the students.  The 1936 revue was a particularly large production.  It included a cast of eighty-one, and centered on the story of an amnesia victim.  According to the April 22, 1936 Indiana Daily Student, the 1936 show involved “blackouts, comic burlesque and chorus numbers,” while “Jimmy Cathcart and his orchestra provide[d] music from a raised platform at the rear of the stage,”  Two years later, the 1938 revue incorporated ten original songs with titles such as “Dreaming I Really Love You,” “It’s Just That Thing Called Love,” “Indiana Lullaby,” “Together,” and piano novelty called “Mud.”

The Jordan River Revue set a high standard, and some years were thought to be better than others.  The 1958 Revue received particularly harsh criticism from the Indiana Daily Student, where staff writer Neil Gould found the production of “The Beautiful Witch,” so unsatisfying he questioned how the script was ever authorized:  “the quarrel is with whoever, seeing the book before rehearsal sanctioned the work for public performance.  If a student-written project can honestly be called good, evey [sic] by amateur standards, is not forthcoming, it is the responsibility of powers that be to choose a production which will do credit to the people associated with it, be home grown or not.”  Despite his criticisms, however, it is clear that the Revue was a major event, inspiring passionate responses over the years.

However, enthusiasm in the Revue began to fade in the 1960s. Eventually the once venerated Revue was no longer an annual event.  Fewer students were interested in submitting scripts, and the scripts submitted were reported to be of a lesser quality.  An article in the January 5, 1966 issue of the Indiana Daily Student claims that other student activities had begun to usurp its place.  In 1970 an “all-star” revue was organized in Hollywood, sponsored by the IU club of Los Angeles.  Notable alum participated, including composer Hoagy Carmichael, Andy Duggan, Dick Shores, and Patti Fisher Blair.  Like many other campus traditions, however, the Jordan River Revue could not survive the 1960s and 1970s.  The last student produced review was in 1962. 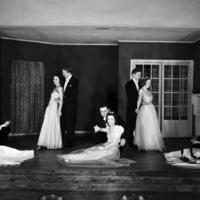 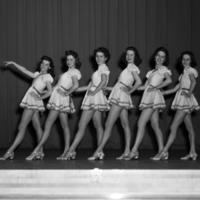 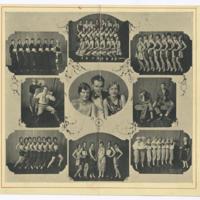 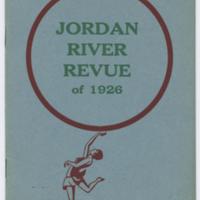 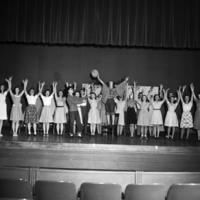 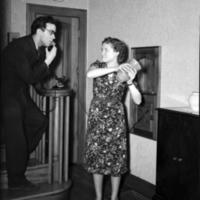 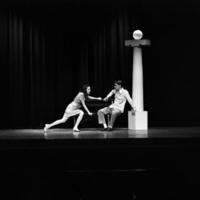 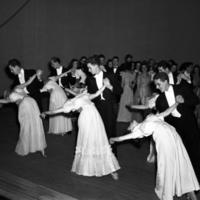 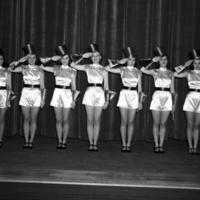 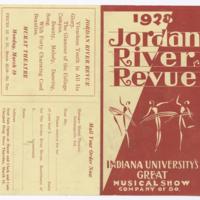 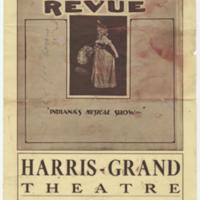 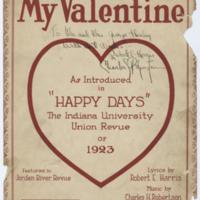