As college football became progressively popular across US college campuses and the nation itself during the early decades of the twentieth century, Homecoming and the Homecoming football game became increasingly large and often wild celebrations.  Indiana students began holding what they termed a “powwow” prior to the Homecoming game.  The Indiana University powwow celebration was a major part of Indiana University athletic culture for many years.  The powwow was really a large banquet, the theme of which often involved students and alumni dressing up in stereotypical "Indian" garb.  Attendees would “brew powwow medicine,” smoke a “peace pipe,” and often bestow “Indian titles,” such as “Heap Big Medicine Man,” “Princess Laughin’ Water” and “Chief Boom-Boom,” on the “chiefs, braves, and squaws” of the athletic department.

The first Powwow was held in 1919.  Sponsored by the Booster Club, it was attended by over 700 students, alumni and faculty.  Often prominent Hoosiers were in attendance, including members of state government.  Preceding the Powwow students and alumni would often march through campus and parade down Jordan Avenue, across 3rd Street to Indiana Avenue and up 7th Street to a bonfire at the Fieldhouse.  Afterwards, the precession would “snake-dance” to the auditorium.  Following the banquet, the enlivened assemblage would sometimes watch a game between two freshman teams or move to Dunn Meadow “where the ‘Famous Hundred’ will beat upon the tom-toms and stir the warriors to a fever pitch, where yelling, singing, speeches and war dancing not only will be allowed, but required.”

Usually held in the men’s gymnasium, the Powwow often turned boisterous.  One account states that in 1923, IU President William Lowe Bryan cast off his jacket, stood on a table, and yelled, “‘Are we going to stand and fight tomorrow?’”  He was met with an enthusiastic “YES!” from the crowd as they threw confetti and paper plates in the air.  The 1921 Arbutus describes that year’s banquet as a highly energetic affair: “Enthusiasm, good feeling and hilarity were rife.  Time and again during the speeches following the banquet the great crowd broke into a bedlam of applause.  The great gymnasium reverberated with the shouts and cheers of the diners.  Speeches in honor of the team and the University were made by many alumni and students, but the address which brought the crowd to its feet in an ecstasy of enthusiasm was delivered by President Bryan.  After his impassioned appeal for loyalty to the team in the hour of need, the room resounded with cheers for five minutes."

Until 1929, women held their own unofficial powwow in the Student Building.  According to Charles Sembower’s 1941 article, “Some Campus Facts: That You Should Know Powwow Banquet Begun Way Back in 1919,” published in the Indiana Daily Student, the men’s official powwow had “dwindled to telephone booth dimensions.  As it finally turned out, the women allowed the men to participate in the Pow-wow rather than the opposite.”  After breaking this gender barrier, the “all-University Powwow” was an even greater success, inspiring school spirit across campus.  At some point prior to 1939 the powwow was sponsored by the Sphinx Club and the Pleiades Club, two social clubs (the former for men, and the latter for women).  The clubs would often announce their new pledges at the powwow.  Food shortages during World War II put an end to the event for several years.  It continued in the 1950s, remaining popular with alumni especially.  The 1956 Arbutus states:  "When alumni visit their alma mater during the annual Homecoming weekend, getting-together-talking-over-old-times lasts all weekend.  This mixing-it-up over memories usually leads to all night merry-making.  The confusion receives a transfusion Friday night when the Homecoming Pow-Wow heralds the hodgepode [sic] of huddles to follow with some ‘organized’ hoopla."

The tradition seems to have dropped off around the late 1950s, perhaps as other options for celebration became available, and the powwow became associated with older generations. 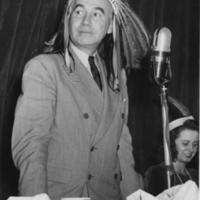 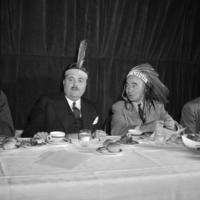 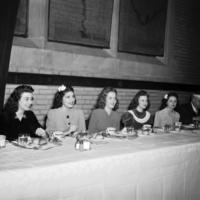 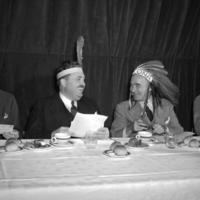