Probably beginning in the 1920s, Indiana University freshmen were issued special hats, often referred to as pods.  The pods were close-fitting caps with three inch bills.  They were green, with a red patch one inch in diameter.  The pods were sometimes called “emerald pods,” for their color, or sometimes “rhiny pods,” as Freshmen were sometimes referred to as “rhinies.”  Pods were a major part of early twentieth century University culture; many universities issued similar headwear.  Caps were symbols of status on campus, many different honorary organizations and clubs, involving men and women had their own signature caps.

Pods were a mandatory component of the freshman behavioral code issued by the Skull and Crescent Club, which was made up of sophomore men from each of the fraternities on campus for the purpose of achieving a consensus on the management of freshmen activities.  The sophomores also wore distinctive caps: green and gold pods which marked their elite position as enforcers of these traditions.   According the Arbutus of 1938, "Skull and Crescent, social honorary for sophomore men, occupies a unique position on the campus.  There is no great amount of purpose to it, though ambitious members will swear that this is far from the case."

Allegedly any freshman caught not wearing his pod could be subjected to an unwanted haircut by the club.  Other rules established by the Skull and Crescent Club varied from year to year.  For example, according to the 1938 Arbutus: “the local chapter of Skull and Crescent went on a great tradition-building spree during the past school year.  One project consisted of picking out an ‘upper-classmen’s walk’, which place was to be no man’s land to the Freshmen.  The latter promptly painted insulting signs on it with green paint.”  This designated “freshman’s no man’s land” was frequently the walk between Kirkwood and Maxwell Hall.  According to the 1956 Arbutus, the Skull and Crescent club required all pledges to carry a paddle with them on campus and get active members to sign it.  At the end of the year it was customary for freshmen to burn their pods at a bonfire on the banks of the Jordan River, during a night dubbed “Cap Night” or the “Burning of the Pods.”   Prior to throwing their caps on the bonfire, freshman would sometimes be forced to take dive into the Jordan River.  After this “watery march” they were able to throw their caps on a bonfire, metaphorically and literally ending a “year of bondage.”  This tradition was discontinued at least temporarily, however, in 1938, because, as the Arbutus of that year asserts, “of the prevalence of broken limbs and other gory wounds."

By the 1940s club and fraternity pods were no longer fashionable as symbols of status. However, through the 1950s up until the late 1960s, it is possible that many fraternities still required freshmen members to wear them.  Throughout the 1960s and 1950s scattered members of fraternities (particularly the Skull and Crescent) can be seen in the Arbutus, wearing pods and frequently brandishing paddles in what may be a jocular nod to older traditions, or evidence that these codes continued to be enforced on a smaller scale.  What is likely the last evidence of pods at IU is in the Skull and Crescent club photograph from the 1969 Arbutus, in which a few members are wearing the club’s signature beanie. This is also the last time the Skull and Crescent Club is mentioned in the yearbooks.  By 1970 pods seem to have fallen out of favor completely.  As students became more politically and socially conscious, and styles changed, traditional dress codes were referenced with much less frequency. 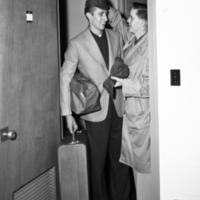 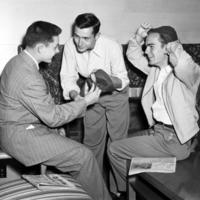 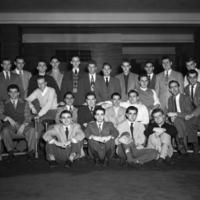 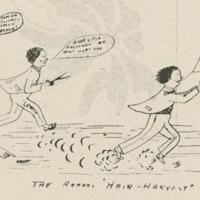 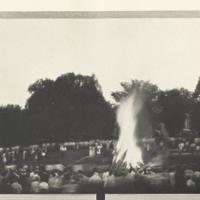 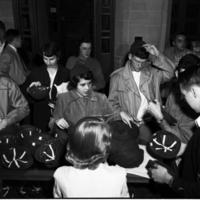 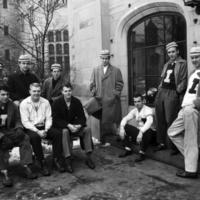