During the early decades of the University class rivalries were a major part of campus social life. Many students fervently involved themselves in this traditional feud.  Freshman and sophomores, and juniors and seniors would frequently engage in friendly and sometimes less-than-friendly competition.  As commencement rolled around,however, juniors and seniors would put aside animosity and smoke a “peace pipe.”  On commencement day, dressed in their caps and gowns, seniors would march across campus, often lead by the class president, and sometimes, “the class yell leader.”  Both male and female seniors and juniors would gather in Jordan Field, and form a large circle, with each class comprising a half.  In this mock formal ceremony, the two classes would officially terminate all aggression, and speeches would be given by both sides.  According to the 1909 Arbutus each class would “set forth chosen orators who revamp the ancient lore of battle and antagonism in the more youthful days of the classes, and endeavor to heal over any little wound that may have been left bleeding.”  Often the seniors would furnish the juniors with advice for their upcoming senior year.

The peace pipe ceremony was unique to Indiana University and widely considered one of the campus’s most distinctive rituals.  Classes would sometimes decorate the pipe with ribbons representing their class colors. The 1909 Arbutus describes the ceremony as “one of Indiana’s prettiest customs.”  The class of 1905 donated a remarkable pipe to the school, which was used in the following years. Exquisitely crafted and several feet tall, the pipe is housed today in the University Archives. 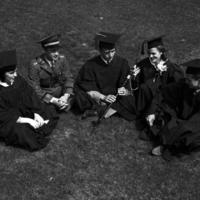 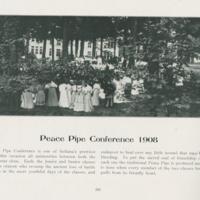 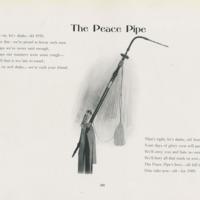 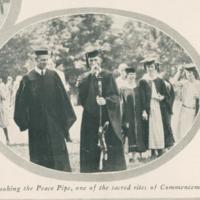