The law-med boress was a rather comical annual event inspired by the rivalry between the medical and law departments.  The word "Boress” is thought to be a combination of “bore” and “ass,” although some allege the name comes from Boreas, the Greek god of the north wind.  The term was coined in the 1920s and was originally written “boreass,” until it was shortened to “boress.”  Boress could mean “hoax” or “prank.”  It also came to be slang for being lazy and unproductive.  As used by the “cadaver carvers” and the “mad monks’” of the medical and law schools, the term seemed to have involved a mixture of all three meanings, but primarily the prankish aspects.
Beginning in the 1920s, law and medical students would meet on the steps of the Union Building during homecoming and compete in a “verbal boress,” to see which department could come up with the most effusive and ostentatious insults.  Preceding the competition, the departments often began hurling garrulous slights in the Indiana Daily Student, such as the following statement:  “You refractory and obsequious embodiments of fatuity, you dullards of hallucination, you ignominious sycophants of tergiversation, you pusillanimous and putrescent yokels and laborers of continual delusion, come thou forth to meet your masters, we the very exemplars of equanimy, we the imperious savants of magnanimity, we the omniscient permeators of knowledge—Committee of the Challenge."
Each team would scour their dictionaries to create the most verbose and pompous insults possible.  The competition was a mock formal affair; the med students would wear lab coats, sometimes waving bones in “professional fury,” while the law students would wear black suits, brandishing canes.  As pictured below, the law students often brought ducks to the event, presumably to irritate the “quacks” in the medical department.  The true winner of the boress would not be crowned until after the annual law-med football game, which officially determined which profession won the trophy, known as the “Thunder Mug."
The rivalry between the “quacks” and the “shysters” was not confined to the annual boress.  Throughout the school year, the two departments would engage in a war of practical jokes, including raiding each other’s buildings.  The rivalry was put to an end when the medical school moved off of the Bloomington campus to Indianapolois in 1958. 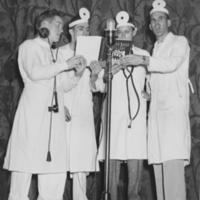 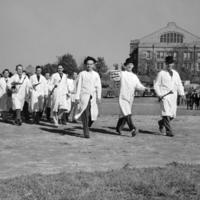 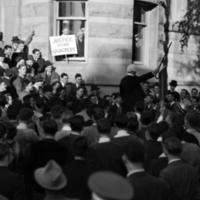 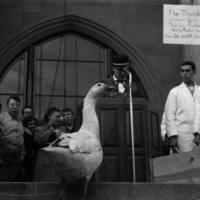 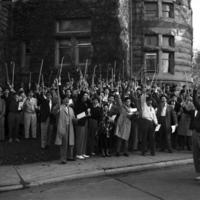 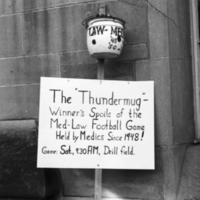 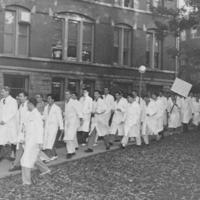 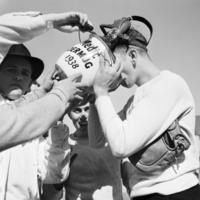 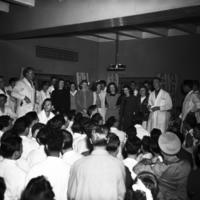