For over half a century the junior prom was one of the most popular events on campus.  The first junior prom was held on May 17, 1907.  In his history of the university, Thomas D. Clark contends that from 1905 until the beginning of US entry into the First World War, dancing was a campus mania.  For Clark, the only upside of this “campus craze” was “that it absorbed energy which might otherwise have been expended carousing.”  Before 1907 there were no university-sponsored dances.  Students looking to participate in that activity attended dances in downtown Bloomington.  Although no drinking was allowed, the downtown dances were somewhat scandalous for the time.  They were not chaperoned and frequently lasted past midnight.  According to Clark, many at the University subscribed to the popular belief that dancing was a sinful activity.  Even at schools where dancing was permitted, only a few types of square dancing were allowed, certainly no waltzing, and at some schools men could only dance with men and women with women.  In 1907, however, the university was persuaded to hold its own dances, so students no longer had to go downtown to dance.

Although campus dances were likely less rowdy under University supervision, students were sometimes permitted to dance past midnight.  The 1925 Arbutus described the Junior Prom thusly:  “the campus frolicked till an almost literal dawn in the Men’s Gym.  This was due to the extraordinary leniency of the authorities in allowing the bacchanalian orgies to continue till two in the morning after May First.”  The junior prom remained an extremely popular campus event until the 1970s.  Over the years IU students came up with many different and often elaborate themes for the Junior Prom.  The 1925 theme of a “moonlit garden” was an immense undertaking, involving blue silk, hundreds of pounds of smilax, which lined the walls and ceiling, and wires to give the effect of trees.  Japanese mats of various colors and wicker porch furniture were arranged to give a further impression of a garden.  In anticipation of the dance, the May 5, 1925 issue of the Indiana Daily Student predicted:  “rainbow-clad ladies resting lazily in the arms of happy but sombre-attired [sic] gentlemen will float soothingly forth ‘neath the blinking, scintillating low-hanging heaven.  And completely bordering the twinkling sky will be the latticed gardens of smilax gently swaying in the lazy and indolent zephyrs of springtime.”  The 1925 Junior Prom seems to have lived up those expectations and over 900 students attended.  The event boasted live music from Bix Beiderbecke’s band.  The following year, the students seem to have attempted to surpass the success of the previous year’s Junior Prom. The Indiana Daily Student reported there would be an electric fountain on a platform at the center of the pool, surrounded by several live swans, and much to the delight of students, in 1926 the University lifted the ban on the Charleston.  Students were allowed to dance the Charleston only on the night of the junior prom that year.

Another notable Junior Prom took place in 1942.  Tommy Dorsey’s orchestra, including a young Frank Sinatra, played to an enthusiastic crowd.  To the student’s delight, Dorsey performed his popular hit, I’m Getting’ Sentimental Over You.  The theme chosen that year was based on Stuart Davis’s modernist mural, Swing Landscape.  Although Swing Landscape was commissioned by the Federal Arts Project, and was intended to be displayed at the Williamsburg Housing Project in Brooklyn New York, the work ended up being sold through the Federal Art Gallery, and eventually found a permanent home at IU.  Currently, the work hangs in the Indiana University Art Museum, where it remains one of the museum’s most popular and important works.  In tribute to the University’s acquisition, the students swathed the gym in modernist décor and used lighting to create an atmosphere.  The event was a great success in terms of both aesthetics and entertainment.  The Arbutus of that year described the Junior Prom in the following terms:  "the modernistic, surrealist decorations for this year’s Prom were the most striking ever used for a dance in Alumni Hall.  The swing composition painting by Stuart Davis, which was unveiled when the queen was presented, the modernistic columns and the indirect lighting made the 1942 Junior Prom really an ultra-smooth, ultra-suave extra-special, and super-perfect formal season finale."

The 1960s saw a drop in attendance for many campus events.  By the 1970s the popularity of the junior prom had declined, as had enthusiasm for most university dances.  Perhaps because students had an increasing number of social outlets, events such as the junior prom did not inspire excitement in the student population the way it once did.  Many events came to be viewed as old fashioned and linked to outmoded social and political ideas that many students in the 1960s and 1970s were seeking to dismantle.  In 1968 African American students challenged the tradition of electing a Homecoming Queen because the contest was based upon a white standard of beauty.  This lead to an end to the competition, and soon other campus organizations followed suit by also dropping their queen contests. 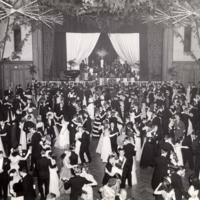 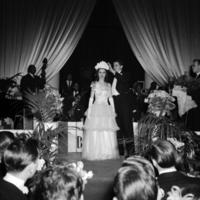 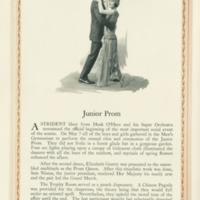 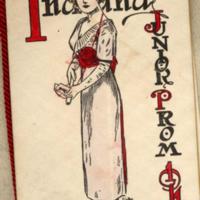 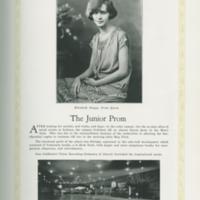 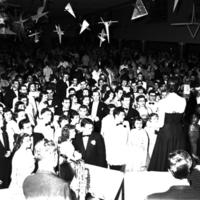 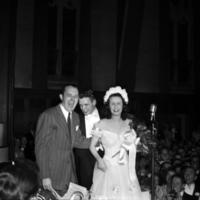 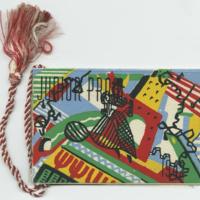 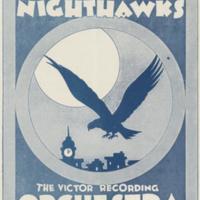 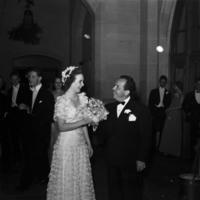 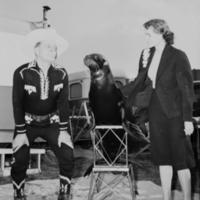