The Indiana-Purdue football game is one of the most anticipated sporting events of the year.  Even before college football was popular on a national scale, the “Old Oaken Bucket” was a major campus affair.  For several decades, on the night before the final Purdue game, students staged a mock funeral for a large rag doll or dummy known as Old Jawn Purdue.  Old Jawn was named in a lighthearted tribute to one of the original benefactors and namesake of Purdue University, the industrialist John Purdue (1802-1876).  Established by the Blue Key Society, an honorary society for upperclassmen, the tradition of burning, burying and mourning Jawn Purdue began in 1930.
Old Jawn took on various constructions, shapes, and sizes over the years.   Students would usually stage mock funeral at that night’s pep rally, where a humorous eulogy for Jawn would be given.  Sometimes prior to the pep rally, Old Jawn would lie in state, as in 1946 when students displayed Jawn in his open casket in the foyer of the Union Building, with members of the ROTC standing guard.  Often the students staged a funeral procession in which a torch parade guided Jawn’s remains to Jordan Field.  Old Jawn was also sometimes the victim of a fake kidnapping during the rally, as in 1949.  According to the 1950 Arbutus:  “villains made off with Jawn Purdue from under the noses of the ever-watchful military.  After being hunted high and low, Jawn was discovered lurking in the crowd at his own funeral.  Since it was late at night, Jawn was shot without trial and buried.  Next day came the invasion from Purdue, and when the smoke had cleared, the Old Oaken Bucket was nowhere in sight.”
Old Jawn was usually then burned in his “annual cremation,” or destroyed in some other fashion.  Frequently the students would throw Old Jawn on the pep rally bonfire. According the 1960 Arbutus “the crowd roared when the ‘beat’ body of Jawn was tossed on the 15-foot bonfire.  Jawn was gone.”  In 1948, he was hanged by an Indiana Memorial Union scaffold and eventually burned at Woodlawn field.  The Old Jawn tradition was discontinued in 1974.  Although students attempted a revival in 2009, Jawn’s funeral has not inspired the joyous following it once did. 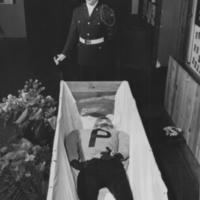 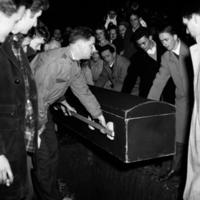 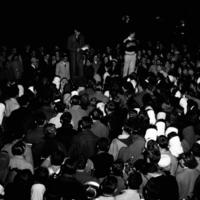 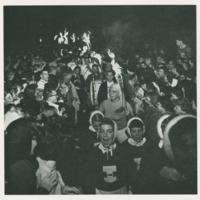 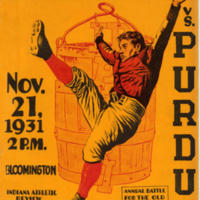 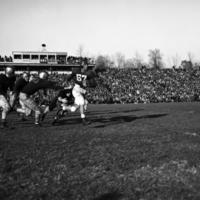