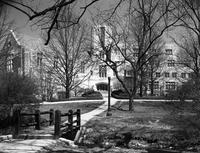 Since 1961 when the University was awarded a 5-year Ford Foundation grant to develop a program of African Studies, Indiana University has steadily built a reputation for excellence in research and teaching related to Africa. One of the most influential of its kind in the country, the African Studies Program (ASP), through the activities and roles of its affiliates, has been one of the principal ways the university has engaged with the rest of the world since the middle of the last century.

The origins of the study of Africa through diverse academic subjects in the United States are located far from Southern Indiana. African Studies as an interdisciplinary field of study was first developed by scholars of African descent at Historically Black Colleges and Universities (HBCUs) in the Eastern and Southern United States during the 19th and early 20th centuries. This first wave of African Studies arose in part to correct the dominant scholarly narrative that constructed African Americans as a people without a history prior to contact with Europeans, as well as to excavate the connections of students at these institutions to their cultures of origin on the African sub-continent.

The aim of this exhibit is to understand, through the use of material from the Indiana University Archives, when and how Indiana University came to be a leading institution in the second wave of US African Studies. Specifically, the exhibit looks at the influence of the geopolitical context on ASP's founding and early development.

NB: This is an adaptation of a physical exhibit currently on view at the IU Bloomington University Archives, E460 Wells Library, 1320 E 10th Street, Bloomington, from September 7 - December 17, 2021. It is being expanded and converted to a digital exhibit.

Credit: This exhibit was created by Mireille Djenno, Librarian for African Studies